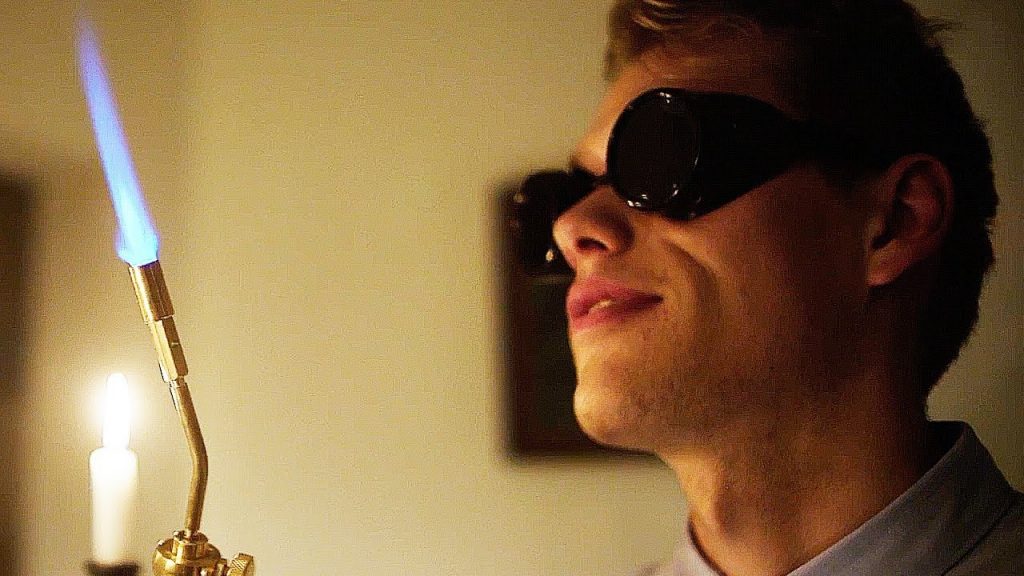 Not to be confused with the Jack Nicholson vehicle ‘The Pledge’, the filmmakers dropped the “the” and is simply ‘Pledge‘, which is by far the best horror/thriller this year. It will be tough to find a genre movie in 2019 that is this fast-paced, fun, and not afraid to get sticky. There are no sidebars or long tangents going on in this film, as it’s straight and to the point and has the action and terror from the very beginning in this ‘Hostel‘ meets ‘The Skulls‘ story line. In fact, I would imagine the same people that attend the ‘Eyes Wide Shut‘ party for Stanley Kubrick started out in this fraternity that is portrayed here.

‘Pledge‘ follows three socially awkward friends who have just entered college and are looking to set up shop at a fraternity. After a few houses shun them away for either their looks or how geeky they seem, a hot girl tells them to hit up a party at a certain address. Once they arrive, they have the night of their lives and are told if they want to rush, come back later that night. Of course they do along with two other students, which is where the torture and insanity begins.

This is not your average ‘Animal House‘ cloak and dagger paddlin’ by any means. You won’t be asking “Sir, may I have another” here. From the start, you know there is more to this fraternity than it lets on and that these students might not get out alive after the brutal scenarios they are subjected to, including a meal that would make ‘Fear Factor‘ cringe, rats, hot fire pokers, and more. What works so well with ‘Pledge‘ is its simplicity to not over think any of its characters or plot points, as well as not take forever to get to the gooey messes. Sure, we’ve seen films like this before, but they haven’t been this fun or enjoyable.

The filmmaking crew of director Daniel Robbins, writer/actor Zack Weiner, and producer Mark Rapaport have lit a fire in this genre and let’s hope they stick together and make more films, because they know exactly what they’re doing here. Even with a low budget and no mega blockbuster actors around, the film still looks pristine with fantastic camera movements, excellent editing, and completely sellable performances from everyone. I was definitely impressed with the film and count me in as ‘Pledge‘ for life!

Be sure to listen to director Daniel Robbins, writer/actor Zack Weiner, producer Mark Rapaport and myself talk about all the fun things about the making of the movie. We dive into the visual effects, deleted scenes, mishaps on the set, and inspirations for the film. It was a fun time.