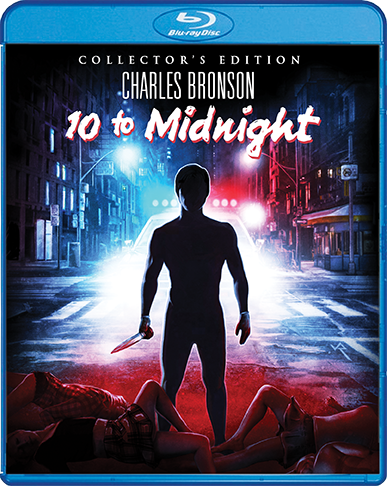 Get your B-Movie nudity excitement ready, because the 1983 horror film ‘10 to Midnight‘ is back with an all new 4K transfer on Scream Factory Blu-ray glory. J. Lee Thompson (Cape Fear) directed this film with a script from William Roberts (The Magnificent Seven) about a serial killer who kills naked women. Well that’s how it sounds on paper, but there’s more to this story, along with a cast of Charles Bronson, a young Kelly Preston, Ola Ray from the Michael Jackson Thriller video, and the diabeetus man himself Wilford Brimley as a police captain. I mean, it doesn’t get any better than that does it?

‘10 to Midnight‘ follows a sadistic serial killer who stalks and asks out women in a very creepy way. When each of these women tell him “Hell No”, he brutally kills them, usually when they are naked. Meanwhile, a veteran and rookie police duo investigate the case, which ends with a big punch to the face. This film is all sorts of fun in that B-Movie sort of way, complete with buckets of blood and tons of nudity around every corner. Charles Bronson really knew how to pic the films he was in later in his career. From Scream Factory, the video and audio presentations are both great along with some excellent new and vintage bonus features, which are listed out below. Highly Recommended!

Bronson plays Leo Kessler, a cynical Los Angeles cop on the trail of Warren Stacy (Gene Davis), a homicidal maniac who turns rejection from beautiful women into the ultimate revenge. When the legal system sets Stacy free, Kessler plants evidence to put him behind bars for good. But Kessler’s plan backfires, leaving him with only one option: to hunt down Stacy on his own … before the crazed killer can strike again!