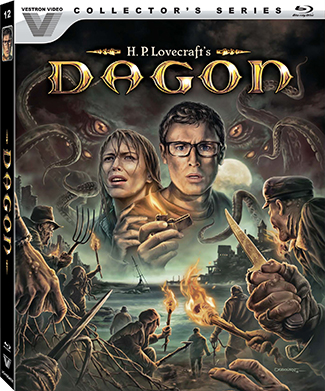 There isn’t a horror film like this out there – past, present, or future. This film ‘Dagon‘ is so off-the-wall that it has to be seen to be believed. Directed by Stuart Gordon (‘Re-Animator’) in 2001, ‘Dagon‘ follows two couples who are vacationing off the coast of Europe. At one point during this vacation, one of them sees a mermaid or so he thinks. Soon enough there is a big storm and crashes their boat. One of the couples heads off to get help at a local village to save their friends. Sounds easy and pleasant enough, right? WRONG! Turns out this village is inhabited by some evil fish people all led by a mutant fish monster who must have blood sacrifices.

So let’s go down the list here, shall we? Fish people, blood, guts, a large cult, fish monsters, and death. It’s all here and super fun to watch. Not many people remember this film coming out back in 2001, but luckily Vestron Video has released it in all its glory. There are some cool bonus features and new audio and video presentations for this film. This is one movie you don’t want to miss if you like bizarre cinema.

Residents of a fishing village tempted by greed evolve into freakish half-human creatures and must sacrifice outsiders to an ancient, monstrous god of the sea.