Filmmaker Kevin Smith defined a cinematic generation back in 1994 with his iconic motion picture ‘CLERKS‘, which he financed himself on a dozen or so credit cards. Smith enlisted the help of his friends to perform and make the movie itself on a low budget about a couple of people who work at a low-end convenient store and video rental place. It was a philosophical and hilarious look at the lives of everyday people and what goes through their mind. Some 25 years later, ‘CLERKS‘ is still as relevant and important as it was in the early 90s.

Since 1994, Smith has made a ton of movies in a variety of different genres, along with some A-List actors. The dialogue he writes is so realistic, quirky, and downright hilarious yet sentimental that you can’t help but fall in love with all most every character he comes up with. Let’s backtrack three years ago where Smith filmed a TV pilot called ‘HOLLYWEED‘ that stars himself and actor/comedian Donnell Rawlings (Chappelle Show/HBO’s The Wire), where the two work at a cannabis dispensary, talking about their issues with society and going on weird adventures – much like Dante and Randal did back in 1994 at the Quick Stop.

‘HOLLYWEED‘ follows the same format as ‘CLERKS‘ did with Smith and Rawlings first discussing if there are any dragons in the movie ‘Schindler’s List‘, which I imagine is something culled from real life discussions between two people partaking in a bit of the ole Mary Jane. From here, Smith and Rawlings take on a slew of different types of customers as they try and figure out a way to improve business, which leads Smith on a delivery to a porn shoot, where he befriends the leading lady. You can tell Smith is having a grand ole time on set in front of the camera and not being the silent type anymore, as we have seen in the many years of his ‘Evenings with Kevin Smith’ tour dates. 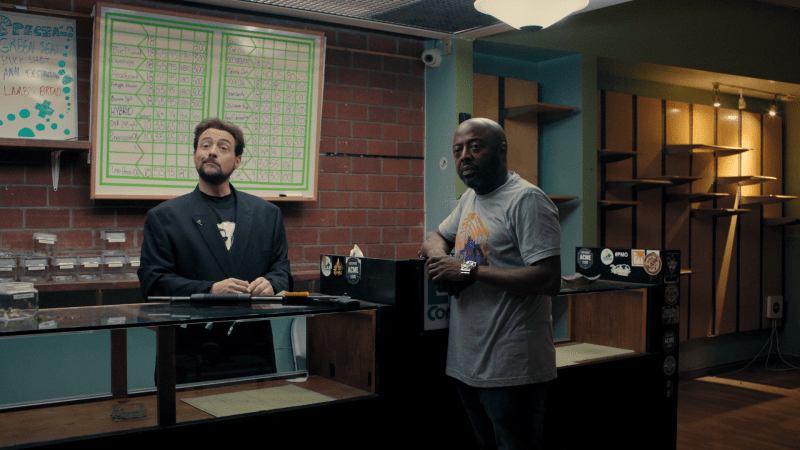 Both him and Rawlings make a hilarious stoned team, determined to do the right thing in the cannabis business while having some good insight and messages abound. The humor is smart, witty, and laugh out loud vulgar, which is why I imagine most networks haven’t picked this one up yet. Instead, the pilot is being shown for free on YouTube and Rivit.TV. This Rivit.TV is part new streaming service and part crowdsourcing, where ‘HOLLYWEED‘ is currently stationed at. The idea is that Smith’s pilot episode would be for free, but that people will like it so much they can pledge between $1.99 and $5.99 per episode in order to get a full season of the show. If ‘HOLLYWEED‘ reaches its goal of around $5.3 million – the show will be greenlit. 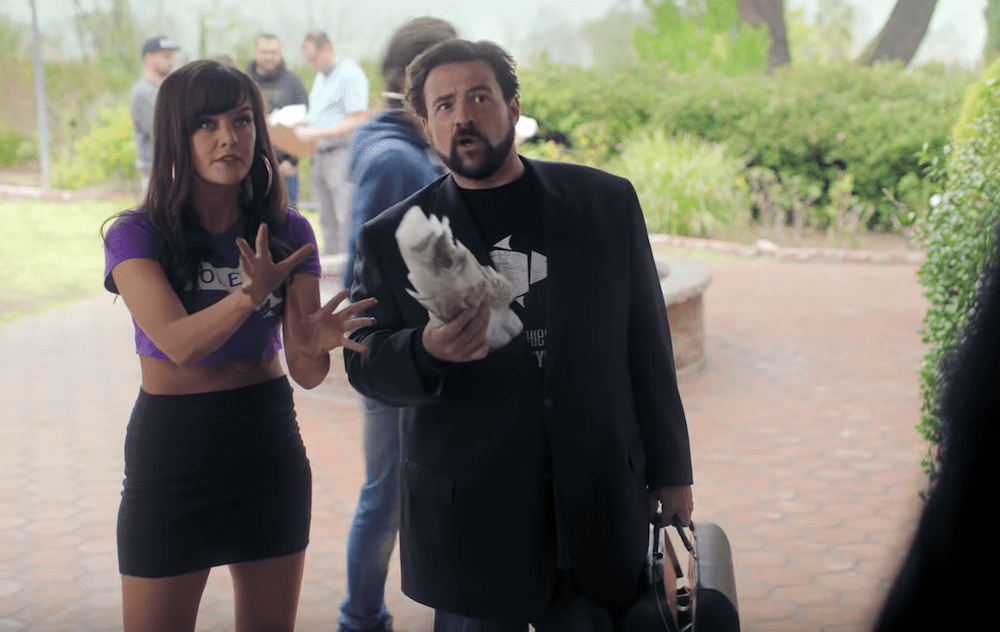 I’m happy to know that Kevin Smith is still out there making the movies and shows he wants to make because he simply loves them and that he’s willing to give up and coming companies a shot. ‘HOLLYWEED‘ is a funny-as-hell and laugh-out-loud show that I can’t wait to get more of because we need humor like this in our world now. It’s not afraid to be funny and at the same time have an endearing message. Don’t forget to check out for the cameo of Jason Mewes too. I also had the opportunity to talk with Donnell Rawlings about his amazing career so far and working on ‘HOLLYWEED‘, which you can check out here.