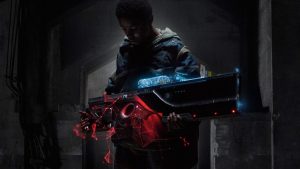 Crash. Pew Pew. Woosh. Boom. Maneuvering through the ruins of an abandoned building, KIN opens with the coolest sound mixing that I have heard and literally felt in a long time. Eli Solinski (Myles Truitt) searches for scrap metal to sell, but finds a weapon endowed with great power and a secret that will alter his life. An outsider, Eli has few friends and lost his mother at a young age. It is no wonder why he is so reserved in his demeanor. At least until you mess with his family. Hal Solinski (Dennis Quaid), Eli’s father, comes home to find Eli suspended for fighting and his elder son, Jimmy Solinski (Jack Reynor) released from prison. Can his day get better?

KIN is Truitt’s big screen feature debut and he has a reservedness that is quite mature for his age. On the small screen, Truitt got his start portraying a young Ronnie DeVoe of musical royalty, New Edition, in BET’s biopic production The New Edition Story. Because of his potential, keep an eye on this one. Of course, we all know the legendary Quaid, who I first saw in Dreamscape. Man, he was/is amazingly cheeky. Later in films like Enemy Mine, my favorite Innerspace, The Day After Tomorrow, G.I. Joe: The Rise of Cobra, and the list goes on and on. Despite his enormous ability to bring the laughter, his dramatic performances are just as moving as his comedic ones.

In KIN, Quaid brings the weight of a single parent trying to make men out of two willful sons. Taylor Balik (James Franco another well known actor) is the despicable and slimy villain of this tale. Franco has pulled such a 180 from his earlier roles i.e. my fave Tristan + Isolde and the Spider-Man series. Some time around Springbreakers, he has gone dark. His range is varied, but I am not sure the villain is his strong suit. When tragedy befalls Eli and Jimmy, they meet Milly (Zoë Kravitz). Viewers will know Kravitz from X-Men: First Class, the Divergent series, and Mad Max: Fury Road as she steps out of the shadow of famous parents (for those that don’t know Lenny Kravitz and Lisa Bonet). Girl, I know you could bring more to that stripper pole than was exhibited, but then again the film is PG-13! Ha! Kravitz’s entrance could have been more impactful, perhaps some aerial feats?? 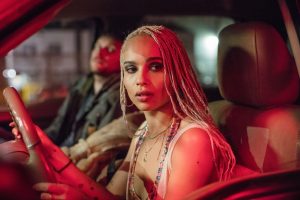 KIN is the feature directorial debut of Jonathan and Josh Baker and adapted from their short film Bag Man. Smoking hot twin brothers with an eye for roping the audience into their envisioned world. Using sounds, images, cinematographic movement, etc. the Bakers tangibly bring the story of KIN from the page onto the big screen. I was privileged to spend some time interviewing the Baker twins. Stay tuned to witness the hilariously riveting filmed discourse that ensued. Much homage was made to movies from the 80s (confirmed by the Baker), which I loved.

From sequences (like the police station, HELLO The Terminator) to costume design (the cleaners, yep, The Wrath – though not intentional, Jonathan and Josh had not seen that one, early Charlie Sheen), the 80s are alive and well.  I highly recommend watching KIN. Very little hang time and an intriguing outsider revelation story. The Baker brothers are great storytellers and you will love the tech gadgets and the special effects that bring them to life. Jonathan and Josh Baker assured me that we will see more of their work in the future and I suspect you will be as glad to hear that as I am.