The past decade and a half, the undead have risen in all forms of entertainment. We’ve seen zombies on the big screen with big stars like Brad Pitt, we’ve seen the undead walk on prime time television and win awards, along with playing zombies in video games, and even in our kid-friendly cartoons. Zombies are the main-stay nowadays and like superhero movies, they’ve completely oversaturated the movie market, where it becomes tiresome to watch yet another zombie movie. We’ve seen Nazi zombies, Shakespeare zombies, marijuana zombies, romantic comedy zombies, and even zombie beavers. What’s next? I’ll tell you what’s next, it’s a movie called ‘AHOCKALYPSE‘ and is a hockey sports movie with zombies that was made in Minnesota.

The title alone sold me and to have a sports branded film filled with bloodthirsty zombies had my horror engine running again, however, ‘AHOCKALYPSE‘ falls short of being the next ‘SHAUN OF THE DEAD‘ movie. The film centers on a young indie hockey team who has just won the championship when zombies become the new norm. It sounds like it could be ‘SLAPSHOT‘, but with the undead, however, that’s not the case. Most of the story revolves around a love triangle between a young couple where one of them is seeing someone else. Hockey games and zombie fighting are more or less on the back burner. 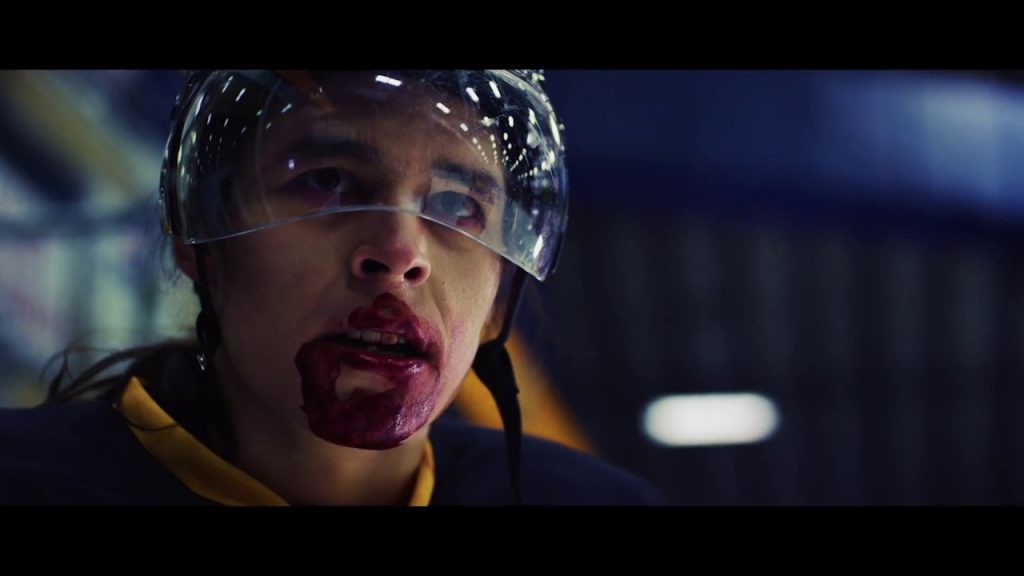 Writer/Director Wayne Harry Johnson Jr. most certainly utilizes his love of movies in ‘AHOCKALYPSE‘, by talking and using other film’s plots and dialogue throughout. If you’ve seen ‘MAD MAX‘ or ‘HOME ALONE‘, then you won’t be lost in this zombie flick, because those two films are consistently referenced. On top of that, Harry Johnson’s (LOL) dialogue comes straight out of the gang at Paddy’s Bar in Philadelphia, but with less capable actors. All of the story and action leads up to one final match and bloody brawl on the ice with hockey sticks, weapons, and hockey pucks. There is a good amount of blood for sure and the practical effects are quite stellar given the low budget, but when CGI takes over, it looks like it was done on an early 1990’s Compaq Presario by your 8-year-old step brother. It’s that bad.

Still, there are some good one-liners throughout and some topless and even bottomless zombies that run amuck from time to time. It’s not the zombie movie you were hoping for, however, if it’s late at night and you have a drink with some friends and are looking for a silly sports zombie film, then do a double feature of ‘AHOCKALYPSE‘ and ‘BATTLEFIELD BASEBALL‘. You’ll have a lot of fun.