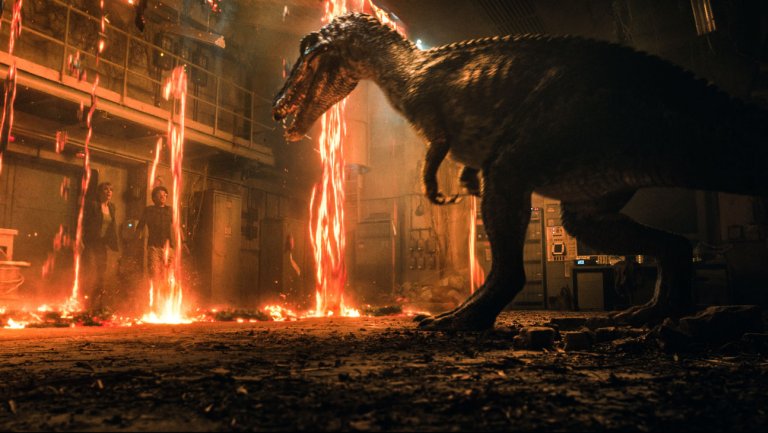 Jurassic World: Fallen Kingdom is a huge waste of time. The first Jurassic World was light on story and by no means great, but it had a healthy dose of mindless entertainment. The sequel though, wasn’t even enjoyable. Jurassic Park is one of my favorite movies of all time. It was the first PG-13 movie I ever saw in a movie theater and I spent years playing with dinosaurs after seeing it. I love these kind of movies, but this sequel is just so, so bad. Jurassic World: Fallen Kingdom fumbled one of the easiest plots to execute in Hollywood: Have dinosaurs attack people while Chris Pratt charms the audience.

First off, this movie is actually three movies in one. It feels like the original script may have been three separate movies that they combined, which may be why the narrative, tone, and connective character motivations are all over the place. Initially, the film is a rescue mission. Claire (Bryce Dallas Howard) is trying to lobby the Government in what we are told is the greatest animal rights debate of our time. The island where Jurassic World/Park existed has an active volcano threatening to wipe out the dinosaurs again. Claire is against this for reasons that were never explained, considering her experience in the last movie. When Congress denies rescue funding, Claire meets with John Hammond’s (old guy who created Jurassic Park) partner, named Lockwood, who never existed until his necessity in this film to keep the plot going. Actually he is literally an old man who says, “I’d like to fund rescuing these dinosaurs to honor my old partner.” What an Idiot. His trust and company is run by some guy named Will who turns out to have other motives for the rescue mission. The thing is that Lockwood is only in the film to explain a really weird direction the movie goes, but more on that in a bit. Anyway, Claire is told that Blue (Chris Pratt’s raptor) is alive and impossible to capture so they need Owen (Pratt) to come help. He tells her all the dinosaurs should die. Then he goes home and watches some iMovies of him with Blue as a baby which undermine the entire predator respect of the first Jurassic World.

(Real quick aside… in the first Jurassic World, it was explicitly clear that the raptors, especially Blue respected Owen but didn’t fully follow commands and would turn in a second. The end of that film even has Blue acting in her own self interest, but Owen could never say “Fetch” or “sit” and get Blue to always comply. However, in this movie it is shown that Blue follows all commands and is essentially a dangerous Golden Retriever. It is weird.) 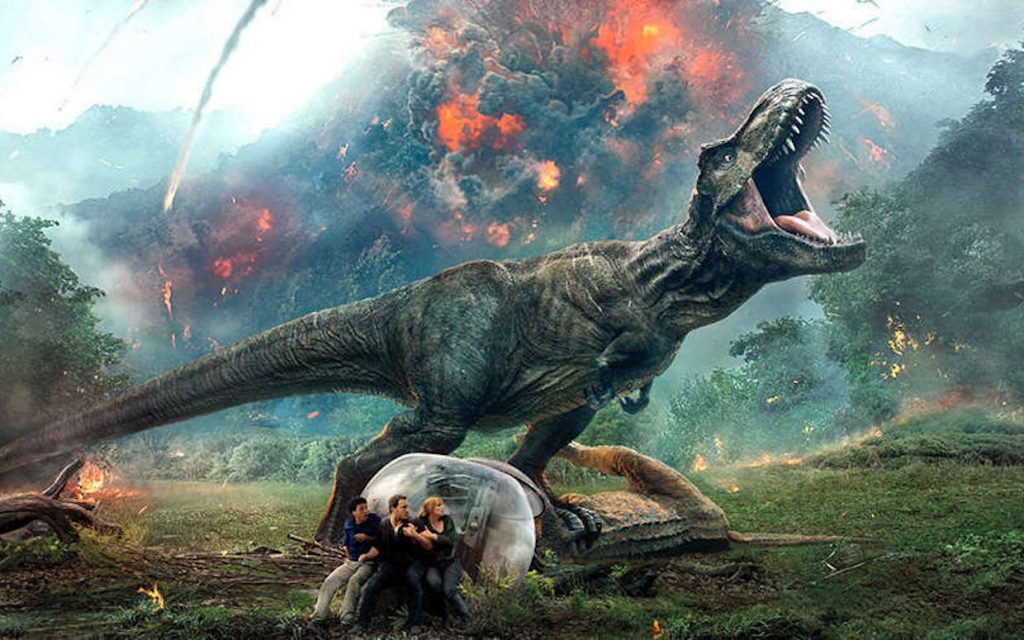 The rescue mission is really an animal trafficking mission to capture and sell dinosaurs. Blue needs to be captured so they can use her blood which will help them breed other compliant dinosaurs? I know, whatever… The first mission ends when Claire and Owen discover they were tricked by the rescue mission and were only brought there to help get the bad guys Blue.

The second segment of this movie is Owen and Claire breaking into Lockwood’s estate to disrupt the dinosaur auction put on by Will. It is here we are introduced to Maise, the old man’s granddaughter. Turns out that Maise is ACTUALLY a clone (one of many) of the old man’s daughter who died in a car accident. We learn that Hammond and Lockwood split up their partnership when Lockwood was doing this cloning stuff on humans in a brief exchange and it is never addressed again. Will kills Lockwood when Lockwood discovers that Will is selling the dinosaurs. Now Will is in full control and in full villain mode as we watch a long sequence of auctioning off dinosaurs. Very boring. Claire and Owen are captured but escape using a dinosaur and they disrupt the entire auction as Will helps introduce the newest, most dangerous, smartest dinosaur: The Indoraptor. You’re probably thinking that the Indoraptor uses its brilliance to escape but actually one of the dumb animal traffickers shoots him with a dart and opens his cage to take his tooth for a necklace. I’m serious. On to the third segment! 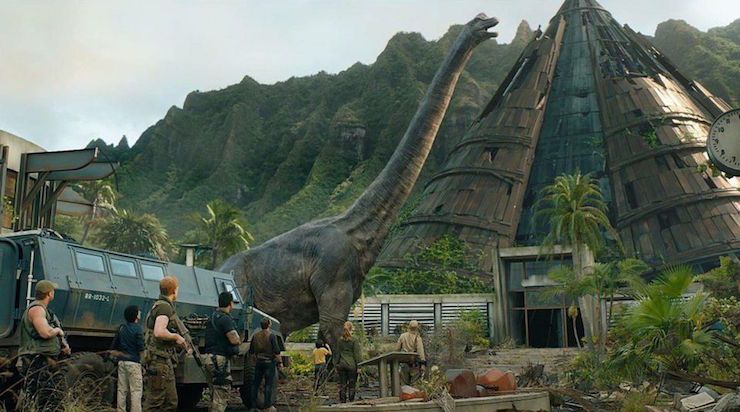 The Indoraptor escapes as several auctioned dinosaurs are taken away and people flee the estate. Owen and Claire meet Maise for precisely 30 seconds before deciding that defending her is the most important part of the rest of the film. What follows is the Indoraptor stalking Owen, Claire, and Maise around the estate for 30 minutes until Blue shows up and body slams the Indoraptor through a glass roof impaling it on the skull of a triceratops. Seriously. Having stopped the Indoraptor, Owen and Claire must decide if they should release the remaining dinosaurs into the wilds of California or let them die of smoke as some of the estate is on fire. Maise releases all the dinosaurs into the wild saying, “They’re alive, like me.” This line would’ve been more powerful if we spent even 30 seconds exploring or discussing clones and their rights. Instead its a throwaway idea in a movie full of them. Jurassic World 3 is then set up as we get a montage around the world of different labs and surviving auction goers transporting their dinosaurs or creating new ones.

I love big dumb movies. I don’t need to have a 100% coherent plot but this movie had absolutely no character motivations or arcs that made sense. Things happened in every scene because they had to happen in that scene. Nothing was ever earned or even discussed above a surface level. You’re probably saying, “Dan! Its a dinosaur movie, get over it!” Thats the thing. Every single action sequence and conflict in this movie was so overthought. There are a million ways to get back on that island other than fake rescue missions that turns into animal trafficking. There are a million ways to make a commentary or rich people, auctions, and arms dealers than an auction in John Hammond’s old partner’s estate who also has happened to let his company be run by an animal trafficker? There are also a million ways to get a genetically enhanced dinosaur to stalk a group of people than how they did it. The point is that none of the plot really mattered but, the writers all chose the most obnoxious ways to get from point A to point B. There were groans in my theater as the predictable twists or commentary happened on screen. 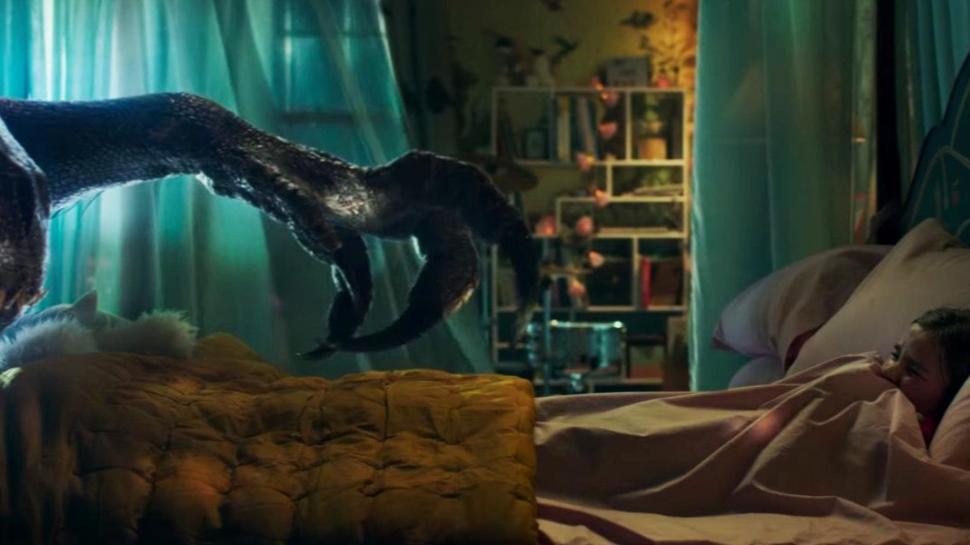 You have Chris Pratt and you have some of the best special effects teams making dinosaurs here. Why do you let something like story and plot screw that up? There were countless ways to make an organic sequel to Jurassic World that would put Chris Pratt with his best friend Blue back on the screen for two hours. The writers of Jurassic World: Fallen Kingdom chose the dumbest possible ways to execute that goal at every possible turn. The movie will make money and we will absolutely see a Jurassic World 3, but I don’t think its asking too much for the movie to make at least the minimal amount of sense required to get from action sequence to action sequence. I’m not asking for an Oscar worthy script. I am just asking for a C+ effort so that I can go back to enjoying how big, dumb, and fun these movies usually are instead of wondering if this was written in crayon.