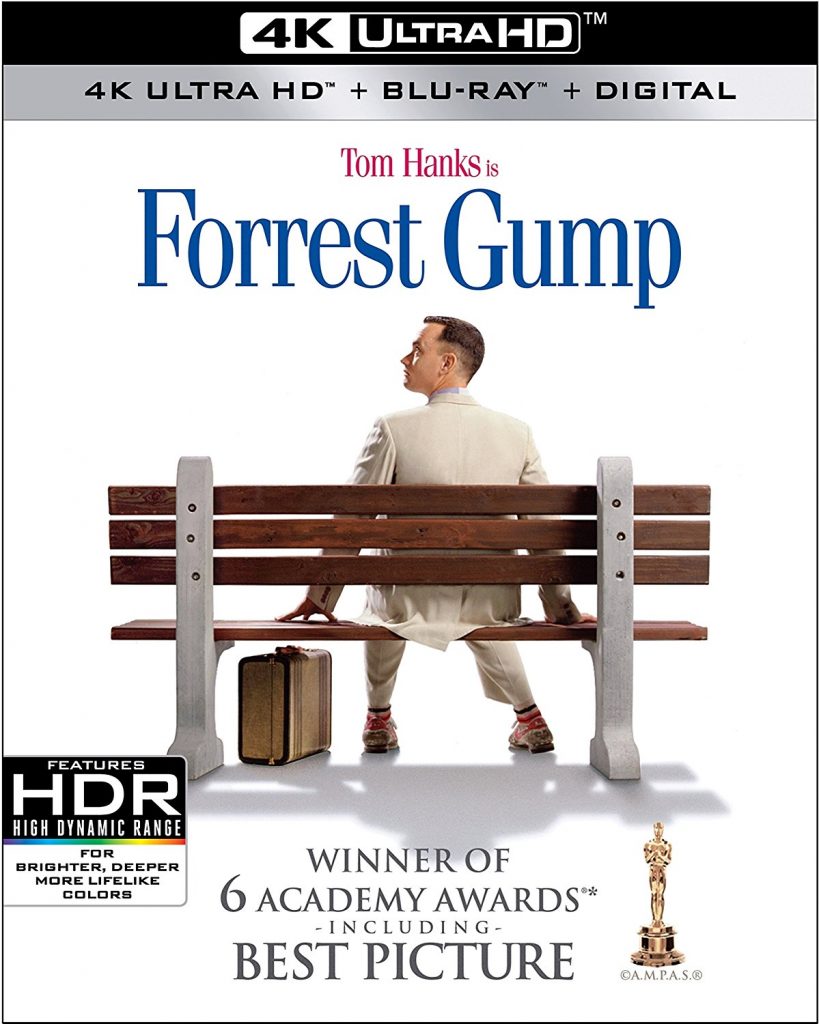 In 1986, author Winston Groom gave us the book ‘Forrest Gump‘, about a simple minded guy who accomplished a lot through his life, including running a shrimping boat and being an astronaut. That book was made into an award winning film called ‘Forrest Gump‘ that starred Tom Hanks as Gump and Robin Wright Penn, amongst other people. Even though there are many differences from the book, this adaptation that director Robert Zemeckis made was truly inspirational, emotional, and a lot of fun.

In fact, Zemeckis’ vision was to show someone as simple as this character Forrest Gump just float through life wherever it took him, like it symbolic feather that is featured throughout the film. It was important to to Tom Hanks (Gump) and Zemeckis to show this character of Forrest Gump go through our actual U.S. history and its little great moments, along with its tragic moments that brought our nation to tears. These decades of history are told through Forrest Gump as he heads to Vietnam, becomes a ping pong champion, starts a shrimping business, and serves as an inspiration for many other small moments, like teaching a young Elvis how to move his hips. It’s done in a fantastic and beautiful way.

There is no agenda for the character of Forrest Gump. There is no spite or hate from him. He’s caring, lovable and just wants to do right and appease people. It’s as like he is in fact that feather, floating from one adventure to the next, not as a leader, but as a willing and anonymous participant, although his simple and quiet ways make him the leader that everyone aspires to be.

Tom Hanks, Robin Wright Penn, Gary Sinise, and Sally Field all turn in brilliant performances, which are still remembered and cherished some decades later. The music in the film is fantastic and captures each period piece from the 60s, 70s, and 80s perfectly. ‘Forrest Gump‘ is still one of those movies that will live on forever and be praised and loved. 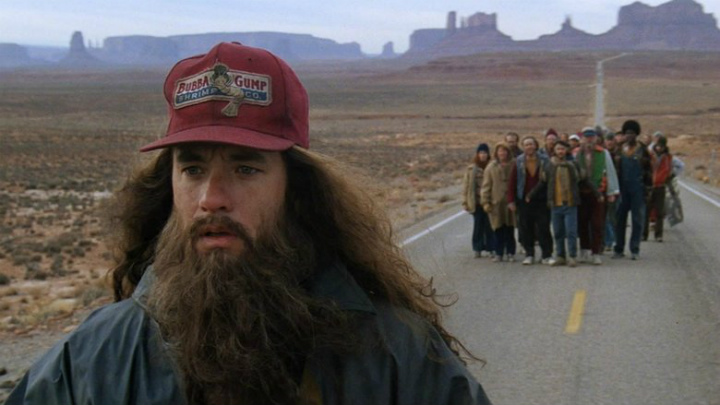 The Video: Forrest Gump finally comes to 4K UHD with Dolby Vision. This release has some good aspects and some unpleasant aspects as far as this new video transfer goes. In fact, I’m willing to bet that this 4K UHD transfer was taken from the recent anniversary Blu-ray edition and converted up to 4K. ‘Forrest Gump’ has a variety of different video aspects too. For instance, when we see the old vintage footage of former presidents or stock footage of wars or other television programs, the image will look extremely grainy, but that’s all part of the style Zemeckis used. It’s not a source issue, but rather a style decision.

With this iconic film being what it is, I expected a big upgrade from Blu-ray, but it’s only a slight upgrade, but comes with its own problems. First off, the Dolby Vision does enhance some of the bright primary colors with some reds, blues, and greens in certain scenes. However, the many other more subdued and secondary colors are never enhanced and look quite similar to the Blu-ray version. With Dolby Vision, each color should look bolder and brighter, but here – they don’t. Detail is rather sharp and vivid in most scenes, but the image can look a bit hazy and muddled due to the old school visual effects. For instance, the reunion between Forrest and Jenny in D.C. looks incredibly soft and hazy with poor colors and choppy visual effects. It’s almost like it’s not the same movie.

Other wide shots look soft too. Black levels fluctuate as well from deep and inky to bleeding over in brightness. The scene where Forrest and Lt. Dan are in the darkly lit bar for New Years, the colors and detail seem to be hindered and soft, but in other scenes, it seems to rectify itself. I was hoping for the end all – be all transfer here, but this is not it, due to its many issues, however it’s a slight uptick in quality from Blu-ray.

The Audio: This release comes with a new Dolby Atmos track, but you’d be hard pressed to hear anything from the height speakers. In fact, this is a rather soft sounding audio mix, which is unfortunate, due to the incredible amount of audio effects. The score and soundtrack are perhaps the big highlight here, with each iconic song sounding fantastic in each speaker with the proper bass and dynamics. It really brings the movie to life. Dialogue is also crystal clear and easy to follow with all of the thick southern accents.

There are a couple of loud and robust moments that bring the Dolby Atmos track to life. One of them is when Forrest plays football at college, where we hear the marching band, players yelling and the surround of the fans cheer him on. It’s the first time in the film we get a glimpse of the Dolby Atmos track in all its glory, but its short lived. The other big moments is when Jenny and Forrest reunite in D.C. once again with the entire crowd applause and yelling, along with the mic reverb and echo. It sounds excellent here. However, the Vietnam war scenes are surprisingly very soft with no overhead sounds from helicopters or bullets. It was very disappointing. Lastly, there were no pops, cracks, hiss, or shrills. 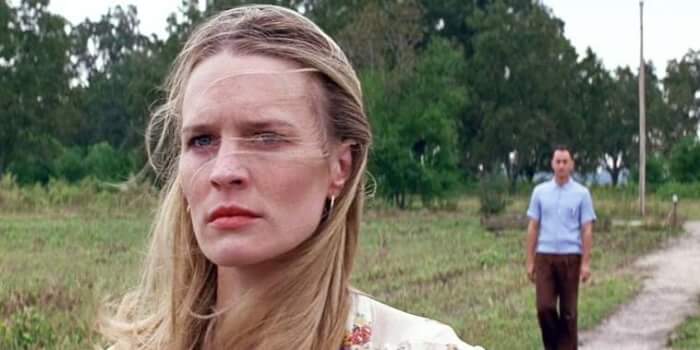 Audio Commentary #1 – Director Robert Zemeckis, Producer Steve Starkey, and Production Designer Rick Carter have a fun time talking about Forrest Gump and everything they did to bring the book to life on film. Zemeckis has the best time here as he talks about the character, the story, historical moments, and a ton of the archival footage he added in here. It’s a great listen.

Audio Commentary #2 – Producer Wendy Finerman is flying solo here, as she talks about making the film. It’s not a particularly great listen and I don’t understand why she couldn’t have been left off or joined the other commentary track.

An Evening With Forrest Gump (HD, 55 Mins.) – Tom Hanks, Gary Sinise, Eric Roth, and Robert Zemeckis all sit at a table and talk about making the film. It’s fantastic in every way and a lot of fun. Great bonus feature.

The Art of Screenplay Adaptation (HD, 27 Mins.) – Forrest Gump was originally a book written by Winston Groom, where he discusses his book here and it being transferred to film. It’s excellent to hear his thoughts on the character and the film.

Getting Past the Impossible: Forrest Gump and the Visual Effects Revolution (HD, 27 Mins.) – A good amount of time is spent on showing how the filmmakers used visual effects and archival footage for the film. It’s quite neat look.

Seeing is Believing (HD, The Visual Effects of Forrest Gump (HD, 23 Mins.) – There are ten segments here that focus on 10 different scenes in the film that show how they made the visual effects in those respective scenes.

Through the Ears of Forrest Gump: Sound Design (HD, 15 Mins.) – There are five different segments here that feature the audio portions of the bigger scenes in the movie and how they created the audio effects for each scene.

The Make-up of Forrest Gump (HD, 8 Mins.) – A brief look at the makeup effects in the movie where people grow older and what not.

Production Design (HD, 7 Mins.) – This looks at the set design and on location shooting for the whole movie.

Screen Tests (HD, 5 Mins.) – There are a few very short screen tests with some of the actors in the movie, including Haley Joel Osment and Robin Wright.

Greenbow Diary (HD. 26 Mins.) – This is the EPK fluff piece for the film with cast and crew interviews, tours of the set, and on-set footage.

Little Forrest (HD, 15 Mins.) – This solely focuses on the kid you played the younger Forrest Gump, how they found him and how good he was in the role.

Musical Singposts to History (HD, 4 Mins.) – Zemeckis and music supervisor Joel Hill talk about the music in the film, which after that – as the movie plays, a popup screen will appear with the people working on the music,  discussing the songs used.

‘Forrest Gump‘ is national treasure of a film, because it is sweet, charming, and a lot of fun to watch. You can tell that there was a lot of love that went into this movie from the filmmakers and actors who brought this character to life. Even the visual effects that were used to create realistic vintage, real life news stories looked incredible. ‘Forrest Gump’ is a one-of-a-kind movie and will not be forgotten. The new 4K UHD video transfer is a slight upgrade, but it has a ton of problems, along with the new Dolby Atmos track, which sounds softer than it should. All of the previous bonus features from previous releases are included here as well. If you’re dying for the digital copy, then you should pick this up for sure. If you are looking to rebuy, this still comes Recommended, because all of the extras are included here along with a slight uptick in video and audio quality.