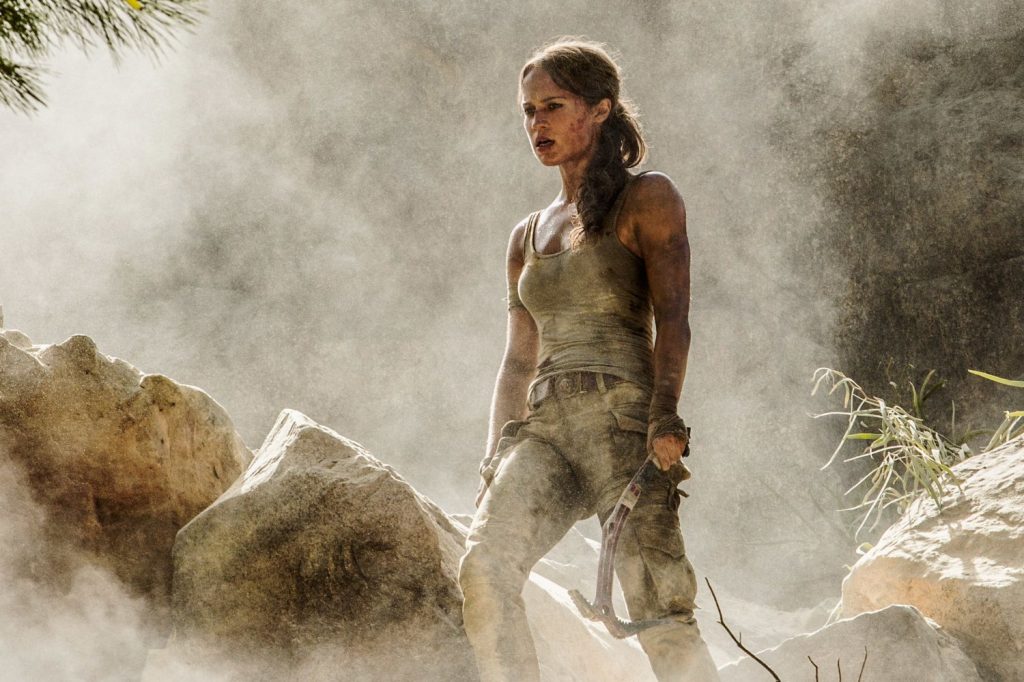 Angelina Jolie is not Lara Croft this time around and we are blessed with Alicia Vikander in the title role. The story starts 7 years after the death of Lara’s father and finds her living as a bike courier while doing MMA training every morning. Lara’s father of course is a billionaire businessman who owns countless companies but she refuses his inheritance because she will never accept he is dead. When she finally gives up and heads into the boardroom to sign all the paper work, her father’s attorney gives her a puzzle.

Lara quickly solves the puzzle which contains a key and a riddle. She then heads to her father’s estate and uses the key to open his secret work room. Turns out her Dad was a poor man’s Indiana Jones played by Dominic West. He tells her if I’m dead burn all of these files, but instead she studies the files and maps to head off and find the place her father was looking for. Of course there is a huge conspiracy and a company trying to open the tomb. Enter Walton Goggins as the villain and we spend the next hour playing cat and mouse and raiding some tombs.

Vikander, Goggins, and West are doing as much as they can with the material they are given. All three are great actors and I enjoy them in almost everything they do, but the plot is standard fare and the movie slowly turns into a typical paint by numbers adventure we’ve seen 1,000 times. It really gets close to being good thanks to the actors, but they can’t overcome it. Its like if Lebron James played with 4 of me on his team. Everyone would praise Lebron, but would say I dragged the team down.

The action sequences were a highlight and I’m pretty sure this role was originally meant for Tom Cruise, because Alicia Vikander RUNS SO MUCH. SO MUCH RUNNING. RUNNING WITH A BOW AND ARROW. RUNNING WITH A PICK-AXE. RUNNING WITH A BACKPACK. RUNNING WITH A GUN. SHE JUST KEPT ON RUNNING. The tomb traps were pretty cool with today’s special effects, but I’d seen them all before, so none of them shocked me.

The movie obviously goes out of its way in the final 10 minutes to set up a sequel, but it all seems tacked on and barely earned. Overall, unless you are a Tomb Raider video game weirdo or just love Walton Goggins as much as I do, there isn’t much to recommend here that you haven’t seen before.