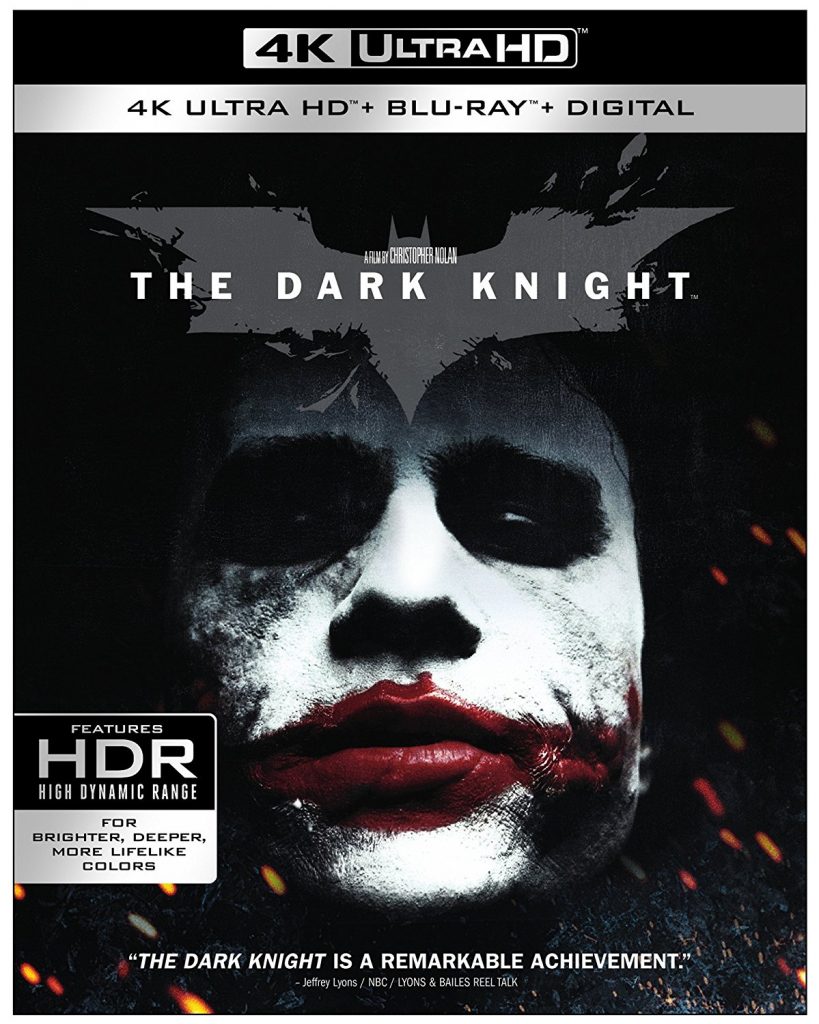 ‘The Dark Knight‘ is one of those rare instances where the sequel is even better that it’s previous original movie. I would say that this film is perhaps one of the greatest, if not the greatest superhero film of all time so far. In addition to that, it’s just a fantastic film itself that can compete with any movie out there. This sequel picks up with Batman in the prime of his justice restoring and bringing criminals to jail. Christian Bale is better than ever here as Batman and we see how him being the caped crusader is taking a toll both physically and mentally on him. He still manages to come through though each time. But soon enough, comes The Joker, played flawlessly by Heath Ledger.

In the comics since the 1930s, The Joker and Batman just go together. They are the main arch rivals to each other and it couldn’t have been more perfectly done that what was shown here in ‘The Dark Knight‘. The Joker always has a card up his sleeve which is never revealed until the end, but he weaves a trail of mass-murder, betrayal, and robberies throughout Gotham to distract the police and Batman at every cost. This puts Batman and Joker head to head in more than one occasion, in which usually – Batman loses every time.

That’s how smart the Joker is here. He’s sadistic, murderous, chaotic, and full of anarchy. He doesn’t care for money or power. He just wants to watch the world burn. And that terrifies Batman, along with the other criminals in town. Batman also has to deal with Harvey Dent, who lives long enough to see himself become the villain here, along with all of the other crazies in Gotham who are helping Joker out. Nolan perfectly staged each action sequence and quieter moment between these three big characters that made them relatable.

You root for everyone here more or less, as each character is given the proper amount of time on screen. Heath Ledger won the Oscar for his role as the Joker and you’ll see why. There is no trace of Ledger anywhere on screen. It’s strictly the Joker and his sadistic body language and mannerisms. It’s truly scary each time he’s on screen. If you’re laughing, you’re laughing out of fear. Everyone else turns in great performances as well. ‘The Dark Knight‘ is one of those films that comes along once every couple of decades. It’s perfectly planned and executed and is one of the better films of all time. 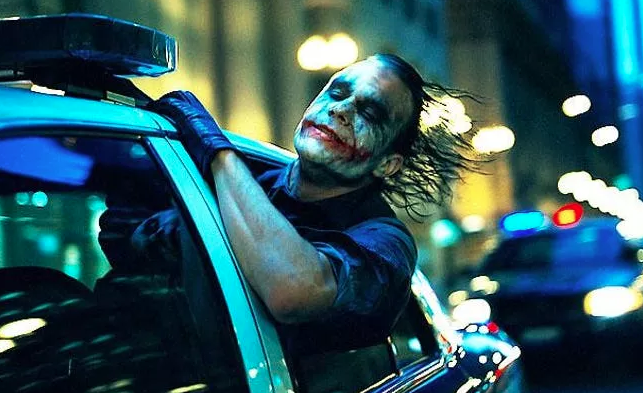 The Video: ‘The Dark Knight‘ comes with an impressive and highly upgradable video presentation that is on 4K UHD in 2160p. It’s quite phenomenal to say the least. In addition, the aspect ratios differ between 2.40:1 and 1.78:1 with the whole IMAX thing. The color scheme, detail, and  black levels all look exquisite here, if not demo worthy in how a film from a decade ago can look this much better nowadays on 4K UHD. The film was shot on 35mm and 65mm, which this new 4K transfer perfectly upgrades and highlights the strengths of the image in every frame. Detail looks amazing in all lighting conditions in both wide shots and closeups. The textures of the new Batsuit showcase every scuff mark and textured leather detail finely. The Joker’s outfit shows individual threads very well and all of the dirt it packs onto it.

Even the CGI effects on Two Face’s blown up face show all the intricate details of bone and muscle. It’s quite impressive. Other wider shots of Gotham look excellent as well. It’s a wonderful film to look at for sure. Colors have a wider spectrum than they did in ‘Batman Begins‘. Primary colors stick out well here with Joker’s makeup that looks freshly painted on. The purple color os suit and red lips and faint green hair just shines. Truly wonderful. Other shots of Gotham are heavily lit and not as dark as the previous film, which looks great. The orange jump suits are deep and rich on the prisoners on the boat towards the end of the film as well. Black levels are deep and inky throughout and the skin tones are very natural. There were no issues with any compression problems or video noise. A demo-worthy upgrade indeed.

The Audio: This release comes with a lossless DTS-HD MA 5.1 mix that is very similar to the previous Dolby TrueHD 5.1 mix on the Blu-ray releases. There are no Dolby Atmos or DTS:X options here though. Still, the audio presentation is top notch and might have a deeper sound with the low end of things. Sound effects pack a punch on all levels with exciting gun shots, big explosions, and grappling gun effects. All hits, kicks, and takedowns are impressive as well and pack some great bass that adds that heft. The 18 wheeler and Batmobile chase scene is phenomenal with tons of explosions, gun shots, and engines revving that all sounds realistic and full.

Every noise has good directionality and is very layered. Other ambient noises sound great on the surrounds and rear speakers. I just wish there was some height speakers as well to get the full effect. Still, what a great sound design, especially when the Joker is hanging upside down towards the end of the film, where you can hear helicopters and the wind in the atmosphere. The score sounds excellent too and always adds to the energy of each scene. The dialogue is always clear and easy to follow along with and free of any pops, cracks, hiss, and shrills. I loved this audio presentation.

Focus Points (HD, 65 Mins.) – This is like a PiP featurette, but more annoying. When you’re watching the film and you want this option selected, you will have to click your remote button to access it each time something pops up, which is 18 times in total. You’ll receive behind the scenes, on-set footage, and interviews throughout, relating to the making of the movie. All of this is worth watching, but a lot of it is featured on the other extras, but just put here.

Batman Tech (HD, 45 Mins.) – A really cool and in depth featurette that covers all of the cool technology used in the film, the big stunt work, and the Batmobile and Batsuit. Loved all of this.

Batman Unmasked (HD, 45 Mins.) – This featurette focuses more on the psychology and history of Batman. On hand are psychologists, comic book fans, detectives, and more who talk about the psyche of Batman and Bruce Wayne.

Gotham Tonight (HD, 46 Mins.) – This is a cool feature that shows 6 Gotham City newscasts that cover the life and crime in Gotham as if it were a real news station.

Still Gallery (HD) – There are about 300 photos to go through with promo artwork, concept artwork, and behind the scenes photos.

Trailers (HD, 6 Mins.) –  A few different trailers for the film are included here.

‘The Dark Knight‘ is the perfect film. It’s one of those rare instances when the sequel is actually better than the original film. I believe this is the ultimate Batman film of all time. The Joker and Batman here are fantastic. I could watch this movie non-stop forever. The video and audio presentations are both demo worthy and upgrades from the Blu-ray releases. MUST-OWN!