‘Here and Now’ is coming to HBO in February from ‘Six Feet Under’ and ‘True Blood’ Creator! 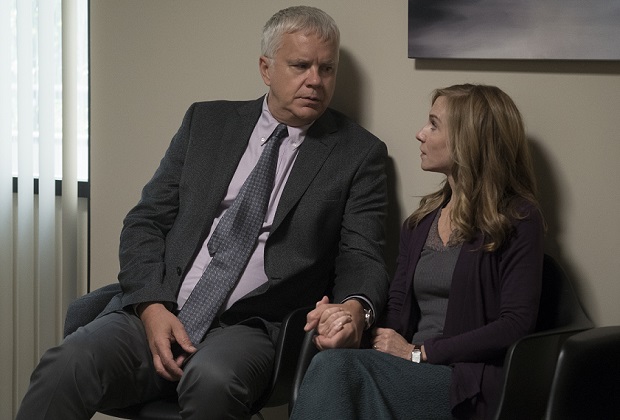 Alan Ball has a new show coming out on HBO, meaning we should all pay attention to this. The new show is called ‘Here and Now‘ and stars Holly Hunter and Tim Robbins. If you don’t remember who Alan Ball is, he wrote a great film called ‘American Beauty‘, which won a ton of awards. He then went on to create ‘Six Feet Under‘ and ‘True Blood‘ for HBO. We’ve all been waiting patiently since then for him to come back to work on a new HBO series.

What Alan Ball does so well is make us connect with all of his characters on such a high level of care, that we feel part of whatever family he creates. This was certain with the Fishers in ‘Six Feet Under‘ through its five season run. Then came ‘True Blood‘, which while it provided us a fantasy look at vampires, monsters, and werewolves, there was still a a ton of heart and deep character development with it. Things went down hill for sure on ‘True Blood‘, as it became more about sex and violence then it did about furthering a coherent story line, but that’s after Alan Ball left the show.

But now we have his new series called ‘Here and Now‘, which sounds like it could be related to the ‘Six Feet Under‘ series. The new show will start on Sunday February 11th at 9PM on HBO. This will be a dark comedy series set in present day America where a couple has taken to adopting and raising multi-ethnic children from around the world. There will also be a Muslim family in the mix with the head of the family being a psychiatrist who is treating some of the kids.

In addition to Holly Hunter and Tim Robbins starring in the show, Jerrika Hinton, Daniel Zovatto, Raymond Lee, Sosie Bacon, Andy Bean, Joe Williamson and Peter Macdissi also star. The series will have a 10 episode first season with options for more. Alan Ball himself is set to write and direct some of the episodes. I for one cannot wait for this.