If you’re like me, you’ve seen the previews for Coco and thought, what is this movie and how is Disney going to make a movie all about death translate to kids. It didn’t stop me from jumping at the chance to preview the film and now I submit my apologies to Disney and the world that I ever doubted their creative genius. I’m loco for Coco and you will be, too.

I had the opportunity to see this film in a theater full of children, many of them from predominantly Hispanic backgrounds. I was blown away with how beautiful Coco was: the story, the colors, the animation, the music, and the way in which it reached out to a new audience that Disney hasn’t touched before. I truly believe there is something for everyone to take away from this film, and if you walk away feeling worse than before you probably don’t have a heart and should reevaluate some things. 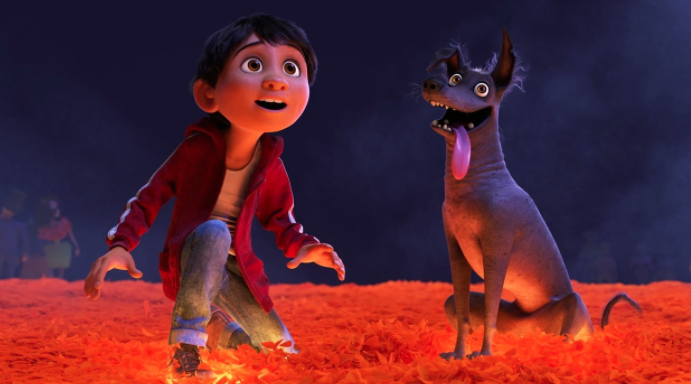 Coco tells the tale of a young boy, Miguel, whose dream is to play the guitar but due to events that tore his family apart way back when, music has been banned- never to be heard, played or spoken of again. Instead, his family makes shoes. He doesn’t understand why he can’t pursue his dreams so he hides his passion and worships a deceased Mexican music legend, Ernesto de la Cruz. Miguel gets the idea to perform in a talent show in the city square but his family finds out and it causes a huge fight on the night of Dia de los Muertos when he’s supposed to be spending the night at home with his family. Miguel, in true young adult fashion proclaims he doesn’t need his family and runs off to pursue his dream of music in the square.

If you aren’t familiar with the holiday Dia de los Muertos, you should do some research, not in order to see the film (they explain it quite well), but just because it’s incredibly cool and a really nice way to honor family. The majority of the film takes place as Miguel gets trapped in the afterlife where most of his ancestors are on the night they try to cross over. I am not going to spoil any more of the plot for you, but I’ll just say it’s filled with twists and turns with Miguel discovering the meaning of family. It’s filled with gorgeous animation from the skeletons to the spirit animals (yes, your pets come with you!), to the cityscapes.

If you are a parent wondering if this is scary for kids, I saw it with my mom who is a first grade teacher and a room full of kids who didn’t seem scared at all. My mom wondered if it would cause fear when the first skeleton’s head popped off and was put back on, but then quite quickly, it becomes clear this is just another family. It’s like a family of penguins, or fairies, or lions, toys, or the like. In Disney films we have enemies and bad guys and the like, and in this film, we have a family that happens to be skeletons. They love and argue and laugh just like any other family. If the children have been exposed to the idea of death, then this movie will be fine for them. If they haven’t, then this will be a hard concept to explain. There are also moments of peril, other deaths, and a father leaving his family (although this has a happy ending).

There is quite a bit of Spanish mixed in but it didn’t bother me. It was a bonus for those that spoke the language but not a hindrance to those that didn’t. I can’t say enough good things about Coco and I can’t wait to go see it again. There are jokes and references for adults, and silly things for kids. It’s gorgeous and fun and heartwarming and you owe it to yourself and your kids to see something other than a princess movie- so get out there and enjoy.