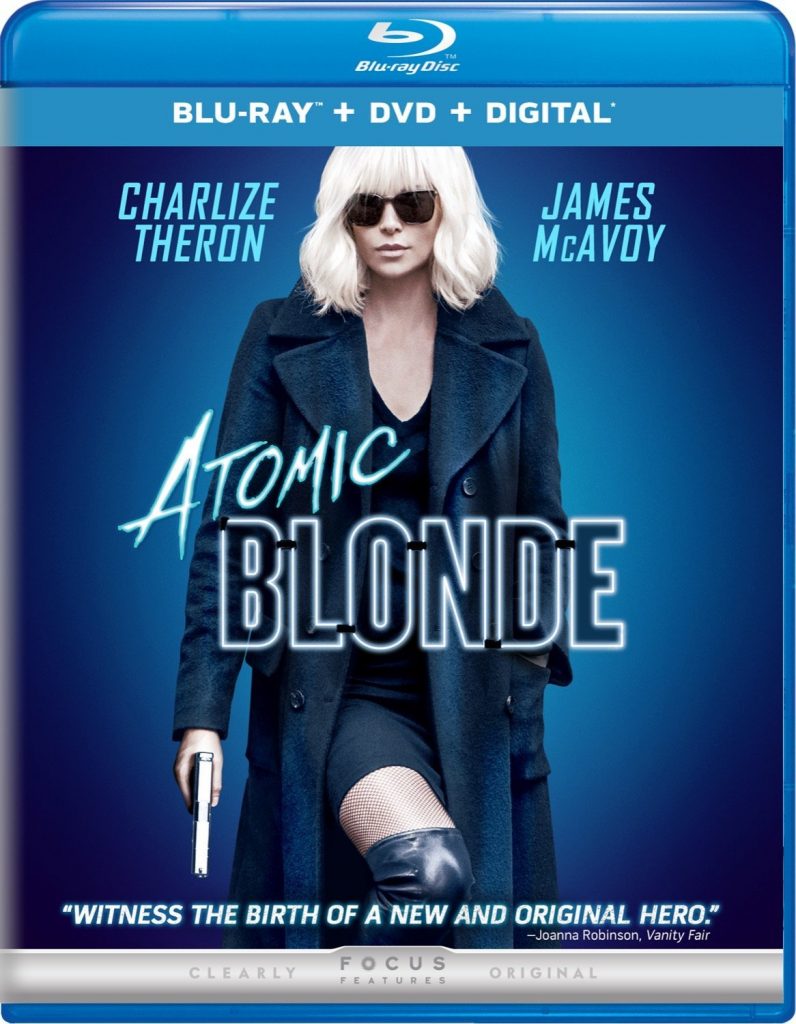 This film portion is written by Dan Moran.

Atomic Blonde isn’t a perfect movie. It has an overly complex plot and is about 20 minutes longer than it needs to be, but all of that is overcome by some of the best action sequences in recent memory with an absolutely badass performance by Charlize Theron.

I assume the pitch for this movie went something like this:

BILL
We aren’t having a great year, Steve. Every script and idea brought to me has been garbage. What am I paying you for?

BILL
You’d better or it will be our asses next quarter.

What if John Wick, Jason Bourne, & James Bond…. had boobs?

We zoom in on the cigar that slowly falls out of Bill’s mouth as his eyes widen, he appears to climax.

The movie starts when Charlize Theron is sent to Berlin right around the fall of the Berlin Wall to recover a list of undercover agents names that is hidden on a watch that was stolen off her dead lover. So the setup is, well, you know… every spy movie ever. Theron is tasked with meeting up with Percival, played by James McAvoy and working with him to find the list before it is sold to the highest bidder. Throw in some Russians, the CIA, MI:6, a double agent mystery, and a French operative and you have enough pieces to move around for twists and betrayals. It seems like too many pieces to weave together into a cohesive plot, where you’d think that removing some would’ve probably helped the film as a whole. But here’s the amazing thing:

NONE OF THAT MATTERS!

I want to make that clear. This movie is complex for the sense of being complex. It is told through flashbacks as Theron recounts her previous 10 days to her bosses, which sounds redundant, but die to the incredible action sequences and performances, particularly by Theron, I was completely satisfied.

Charlize Theron is just as awesome as Daniel Craig, Matt Damon, and Keanu Reeves  put together in their respective spy/assassin movies. She owns the role and I’d take another Atomic Blondestory over Daniel Craig going through the motions for Bond after whatever they did in Spectre. It is refreshing that studios are starting to put female characters in these roles. I can tell you right now that this movie could’ve been made with a Henry Cavill, Tom Hiddleston, etc. and it would’ve been 10 times worse with the same exact script and action because any male actor they put in this role would not have owned it as much as Theron did. The entire dynamic of the film is immediately more interesting and compelling with a strong female character and that is what Theron brought every second.

David Leitch co-directed John Wick before directing this movie and the action has a very John Wickfeel which I loved. However, there is a set piece in this movie that lasts at least 15 minutes and is so relentless and brutal that it reminded me more of The Raid. The sequence, which takes place in and around an apartment, was just breathtaking. I will rewind it 10 times when this movie is on blu ray. It was better and more intense than any of the action sequences in either of the John Wick movies. It happens about an hour into this two hour movie and as we left people were talking about it on the way out. It has to be seen by everyone. Any studio doing a superhero film, spy film, or any film with fights that doesn’t approach David Leitch after this movie is an idiot. Give him a Black Widow movie for Marvel immediately.

The final thing I really appreciated about the movie was that it was mostly self-aware. It knew what it was and played some of the action scenes in a “yeah this is ridiculous and brutal but I mean it is pretty awesome, right?” attitude which my audience accepted pretty early on. It even played a short sex scene between Theron and the female French operative for a laugh in the spirit of “of course two guys won’t mind hearing Theron describe lesbian sex” which was directed right at the audience. The movie failed to show much self-awareness with the wild plot though.

Overall, two of the best action sequences of the last decade and a great performance by Charlize Theron is enough to overcome a needlessly complex plot that makes the movie 20 minutes longer than it should be. I want everyone to see this movie and I want David Leitch to release another action movie as soon as he can. 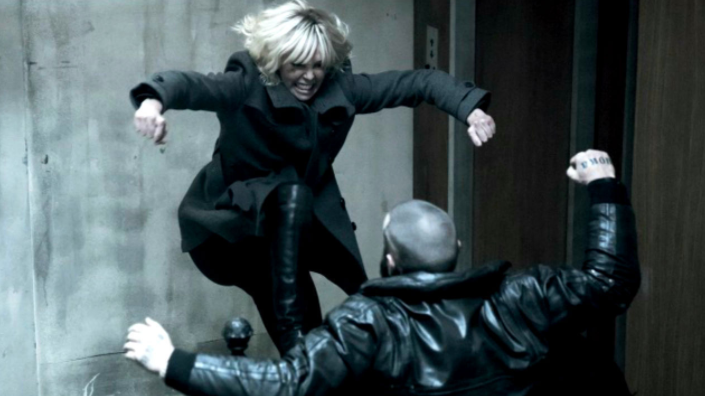 ‘Atomic Blonde‘ comes with a 1080p HD transfer and is presented in 2.40:1 aspect ratio. This is a digitally shot movie and is very stylized in terms of its visuals and colors. I wouldn’t say this film looks particularly lively or bright by any means. In fact, most of the film has a cold and steely image. Blues, silvers, and grays are the key colors in each scene, which almost leaves you gasping for a breath of primary color.

The film gives you it in flashes of bright neon lights on the wall from time to time, but other than those instances, it’s a decaying, cold picture. Again, that’s not the transfer, but rather the intended look and this Blu-ray does a good enough job of showing all off it’s odd color scheme. The detail is as sharp as it can be in these heavily stylized sequences. With the digital shooting process and the heavy effects and filters, the movie has a glossy look to it, leaving it with a flat look. There is a little bit of depth, but more so in well-lit scenes.

Closeups reveal decent detail, but things can look murky in the background and other details tend to not stand out as much. Black levels are deep and inky though and the skin tones are are coherent with the stylized coloring. There was some heavy noise, but no aliasing or banding. I imagine the 4K UHD release looks a bit better than this Blu-ray.

This release comes with a lossless DTS:X MA track and sounds excellent. Watching a big action film, you have a certain expectation on what your sound system should boost out, which I’m happy to say that ‘Atomic Blonde‘ does a great job in that department. All sound effects pack a big punch with tons of gunshots, takedowns, kicks, and chops. Each gun blast is hefty with bass and just rattles the walls.

Other big action effects sound dynamic with great directionality too.  Ambient noises of people talking or screaming all sound excellent in the rear speakers. The height speakers with this DTS:X option adds some audio effects, but it’s not anything potent or loud. Instead, it just slightly adds to the overall effects of the action sequences. I hoped for better here. The score perfectly adds to the intense adrenaline of the film and the dialogue is clear and easy to follow and free of any pops, cracks, hiss, or shrills.

Audio Commentary – The director and editor of the movie talk about making the film, editing the fight scenes, casting, tone, themes, and shooting on location.

Deleted Scenes (HD, 8 Mins.) – There are six deleted scenes, all of which are not great and don’t pack any big action sequences.

Welcome to Berlin (HD, 5 Mins.) – This shows how the city was transformed to the look of the time and shooting on location, along with some production design.

Blondes Have More Gun (HD, 7 Mins.) – Interviews with cast and crew on making the movie, working with the director, Theron’s excitement for the role, and more.

Spymaster (HD, 4 Mins.) – The director is the focus here and how he made the film.

Anatomy of a Fight Scene (HD, 8 Mins.) – This is an excellent extra that I wish more movies would use. The big fight scene is shown on screen with a picture in picture commentary and behind the scenes footage on how they made it.

‘Atomic Blonde‘ is a fun film with great action sequences that rival some of the best action movies of recent memory. Charlize Theron is a big action star and just owns every time she’s on screen. You’re gonna have fun with this one. The video and audio presentations are both solid and the extras are worth your time. Highly Recommended for sure!