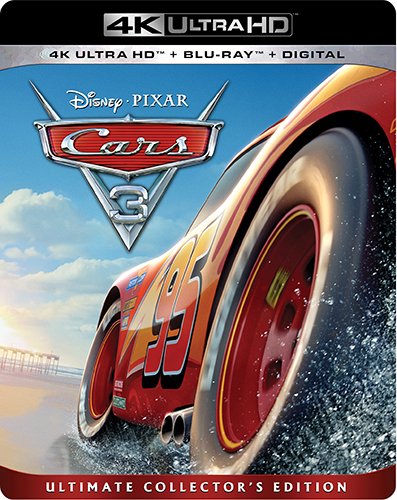 This film review portion was written by Jodi York.

I wasn’t sure how well a midlife crisis plot line was going to play with my 10 & 12 year old viewing companions, but they both gave Cars 3 the thumbs up!  Surprisingly, Harrison said that he really enjoyed that this was a ‘comeback story.’

There were a number of new characters introduced in this film.  Jaquelin, who has a need for speed, said she liked the way the new, high tech racers looked; but what we all relished the most was the scenes with the ‘old timer’ racing cars, which Lightning McQueen sought out to try and get his racing mojo back after a big crash.  There were numerous flashbacks with Doc Hudson (McQueen’s late mentor), and this was a big hit with us.  We all appreciated McQueen’s journey into Doc’s past, reviewing Doc’s career; meeting and training with his mentor, Smokey; and learning that Doc’s greatest pride & joy came not from racing himself, but from training McQueen.

In what Jaquelin referred to as a good plot twist, McQueen ends up taking on the mantle of mentor himself, with another new character named Cruz Ramirez.  But, unlike Doc, McQueen intends to carry on racing as well, and wins the right to quit when he decides its time, not when his sponsor gives up on him (cue the morals of the story).

We viewed the film in 3D, which has certainly come a long way; the landscape vistas were really quite impressive, as Lightning McQueen’s crew traveled across America to his new training facility.  I personally became bored as the extensive racing scenes dragged on (no pun intended), and the kids agreed that the film could have been shortened a bit.  Of course, we were all amused once again by Tow Mater, who we thought was the funniest and most lovable character.  As Jaquelin said, “Tow Mater always makes you cheer up.”

The consensus was that this film was much better than Cars 2, and almost as good as Cars 1.  The kids recommend this movie for anyone between the ages of 5 and 14, and I agree.  Overall, I feel this is a cute movie to enjoy with younger family members, even if it is rather forgettable.  However, if you didn’t grow up with the franchise, and racing isn’t your sport, this movie might not be in your wheelhouse. 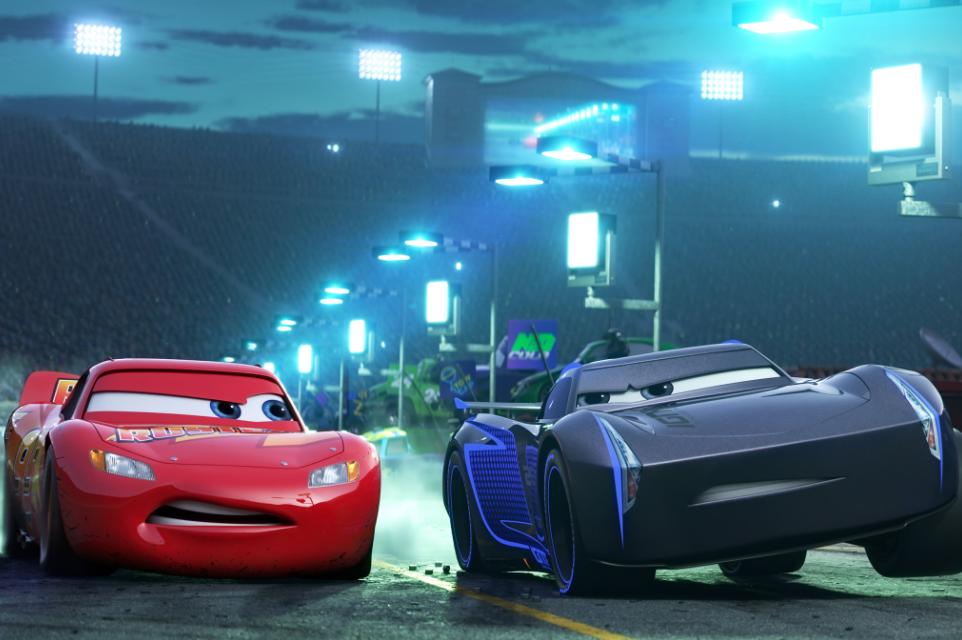 ‘Cars 3‘ comes with a 2160p HDR UHD transfer and is presented in 2.39:1 aspect ratio. Oddly enough, the film was finished in Dolby Vision, but it’s nowhere to be found on this 4K UHD release. Instead, it’s HDR we’re dealing with here. Still, this video presentation looks impressive. Pixar has improved the look of their films over the years with more realism and detail and ‘Cars 3‘ puts that to the test and passes with flying colors.

The HDR color presentation is simply vibrant and striking at every angle. No matter if it’s a closeup of Lightning’s car or the colors of the wide shots of Radiator Springs, the color is outstanding. The HDR really picks up the nuanced shades and smaller colors of each car as it moves through different lighting conditions. The colors are reflective and just a joy to see on every level. In fact, I’d say you can put this disc in and show your friends how well your television handles color. The detail is upgraded here too and is rich with textures in every scene.

The small details and textures on the rubber tires are intricate and easily seen as are the metallic texturing on each car. It’s simply phenomenal. Wider shots look equally impressive with each grain of sand, piece of rock, and other metal looking exquisite with zero softness. It really is an amazing looking video presentation. Black levels are deep and inky with no evidence of crush or shadow either and the animation is very smooth at all times. There were zero instances of any aliasing and banding, leaving this a demo-worthy looking video presentation.

This release comes with a Dolby Atmos track that sounds great, but it’s not on a standard that Dolby Atmos is known for. What do I mean by that? Well, Dolby Atmos adds the height speakers, which give an additional sound aspect in an almost 3D environment. Instead of the sound of a bullet flying from one corner speaker to the other corner speaker on a regular 5.1 surround sound set up, the Atmos adds other speakers that would allow the sound of that bullet to be heard flying overhead and making the full journey, rather than just a point A and point B sound design. In the case of ‘Cars 3’, even though it says Dolby Atmos, there really isn’t anything Dolby Atmos about it with the exception of a couple of scenes that don’t take full advantage of the height speakers and their noises.

For instance, there is a scene where rain falls. Usually in other films that sport the Dolby Atmos option, you’ll hear the rain drops from overhead, providing a great immersion of a storm for you. Here in ‘Cars 3’, it’s vey soft and doesn’t really sound like it’s coming from the height speakers at all. There is another point where cars flip over each other or the point of view is from the road where cars pass overhead. The dynamics and precision of the noises don’t come across well on the Dolby Atmos option, which is available only on the 4K UHD Disc and not on the Blu-ray Disc. All this being said, ‘Cars 3‘ has a good audio mix, it’s just not Dolby Atmos ready in my opinion yet. Dialogue is still clear and easy to follow and the sound effects pack a punch with some good directionality. The score and music always adds to the suspense, comedy, and overall tone of the film, while other ambient noises make their way to the rear speakers. It’s a good audio presentation, but not a great one.

Audio Commentary – The director and a few of the producers talk about working on the film along with the previous two movies in the Cars universe. They also talk about the voice acting, design, tones and themes, and the technical aspects of the animation. It’s a good listen.

Lou (HD, 7 Mins.) – The short film about recess and items coming to life.

Miss Fritter’s Racing School (HD, 3 Mins.) – A fun commercial that advertises to cars looking to be young and racing again.

Cruz Ramirez: The Yellow Car That Could (HD, 8 Mins.) – This focuses on the new character of the film and her design and voicing.

Behind the Scenes (HD, 30 Mins.) – This is a 5-part featurette that tackles areas of production of the film, including more interviews of the cast and crew on themes and storylines, the big race sequences, the merchandising, the promo artwork, the history of racing in general, and more.

Fly Throughs (HD, 3 Mins.) – Three of the bigger animated environments are given an actual fly over and closer look at all the detail that went into it.

My First Car (HD, 6 Mins.) – The cast and crew talk about their first cars, which was fun.

Deleted Scenes (HD, 27 Mins.) – There are quite a few deleted scenes here, all of which are worth watching to see what was left out, along with optional director commentary.

Trailers (HD, 8 Mins.) – Trailers and TV Spots for the film.

Promos (HD, 6 Mins.) – Some more time with the car characters are here.

‘Cars 3‘ is a decent film. It might not be better than the first movie, but is loads better than Part 2. There was some heart and soul that went into this and it shows on screen. The film itself looks beautiful and it sounds good, but the Dolby Atmos could have been a bit better. The extras are excellent and worth watching. With all that is included here, this comes Highly Recommended!