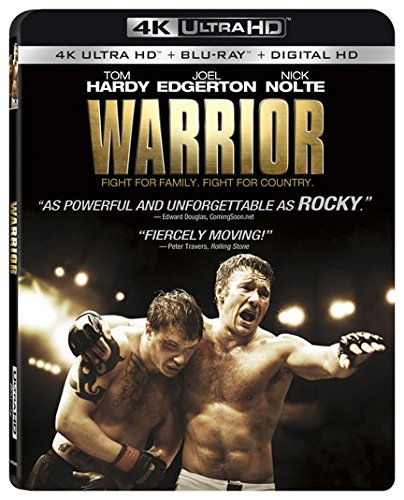 If you ever thought that the world of MMA could be a one-note violent sport, you do not know what you’re talking about and you’ve obviously never seen this highly emotional and excellent film called ‘Warrior‘. It’s been a long time since we’ve all connected to such characters such as these, and it has certainly been a long time since we’ve seen Nick Nolte in a role such as this one, which he received an Oscar nomination for. ‘Warrior‘ is certainly a violent film, but it’s also one about redemption, family, and forgiveness.

Director Gavin O’Connor (Miracle, The Accountant) has flawlessly weaved a very dysfunctional family dynamic into a very emotional movie about coming together and letting bygones be bygones. The film centers on two brothers. One is Tommy (Tom Hardy), who ran away at a young age due to his very abusive and alcoholic father (Nick Nolte) and joined the Marines, where he became a hero. The other brother is Brendan (Joel Edgerton), who stayed close to home and married the love of his life.

Both brothers have not forgiven their father for his past abuse. Brendan is a school teacher, who is trying to make ends meet for his family, who has taken up fighting in small bouts to make some extra money. Tommy on the other hand, back from the Marines, confronts his father, but does not forgive him, resulting in Tommy in taking out his anger on an MMA fighter. Turns out, somebody filmed this fight and the video goes viral. This sets in motion both brothers hearing about a tournament, similar to that from ‘Bloodsport‘, where one winner is crowned with a cash prize.

The two brothers aren’t exactly on great terms either, but by the end, they might confront their own demons with their father and themselves. The result is a very emotional turn of events as the brothers and their father must confront their past and learn to forgive. The fight choreography is top notch and the acting by everyone is award worthy. This is one film that doesn’t soon leave your mind and is highly re-watchable. 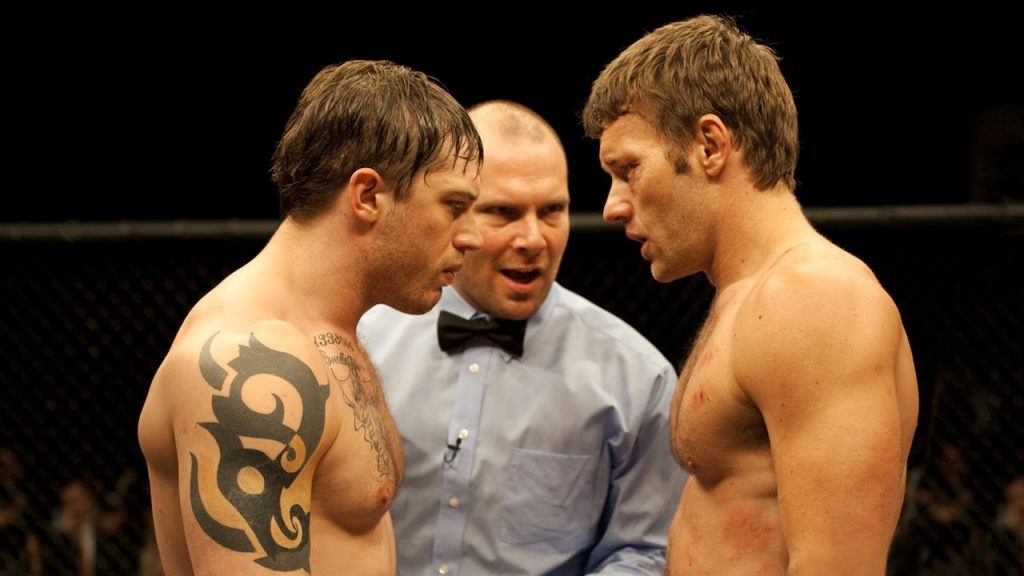 The Video: ‘Warrior‘ comes with a 2160 4K UHD transfer, which has a HEVC H.265 encode in HDR10 with a 2.40:1 aspect ratio. This release has a digital download code as well as the standard Blu-ray version, in addition to the 4K disc. There is definitely an improvement here in detail and color even though the film has a darker and more sepia tone than most. Detail is still very vivid and sharp in closeups in well lit exteriors. The individual hair strands on Nolte and Hardy’s hair look incredible in this new 4K upgrade as well as some of the cuts and knicks on their faces. The hardcore color grading really does a number on the overall detail of the picture though with the filtered and unsaturated color scheme.

The HDR looks amazing here though and is the biggest and most noticeable upgrade with this 4K release. The colors are somewhat saturated in certain scenes to give a pale look to everything as if everything has a pale, yet warmer color spectrum. Other moments are bright and bold throughout with different variations on certain colors on costumes in different lighting conditions. It all looks excellent. Detail also provides strong closeups with wrinkles, makeup effects, beads of sweat, and individual hairs, which show up nicely. Black levels are very deep and inky as well. There are no other compression issues, with the exception of some heavy grain spikes, leaving this with a good looking 4K presentation.

The Audio: This release has an English: Dolby Atmos track, where I used a 7.1.2 Atmos speaker setup with the normal 7.1 surround and two overhead speakers, plus a subwoofer powering this comedy action soundscape. This fully immersive track is outstanding in the heavier fight scenes where the cheers and boos of the crowd can be heard all over the speaker system. Those height speakers really add the full effect and reverb of the venues where the fights happen, putting you in the center of all the action.

Other ambient noises are full and robust as well and never stall out. Dialogue is always crystal clear and easy to follow along with and free of any pops, cracks, hiss, and high shrills.The score is always adds to the emotional tone in each scene, while the low end packs a great amount of bass without going into rocky territory.This is a top notch audio presentation for sure.

Audio Commentary – The filmmakers and Joel Edgerton talk about making the movie, which drags at the beginning, but then delivers a wealth of information in regards to the movie. It’s a very good commentary track.

Redemption: Bringing Warrior to Life (HD, 32 Mins.) – This is a better than average EPK with cast and crew interviews, on set footage, and behind the scenes information.

The Diner: Deleted Scene (HD, 3 Mins.) – A great scene you should watch with Nick Nolte and Tom Hardy.

Brother vs. Brother: Anatomy of the Fight (HD, 12 Mins.) – An excellent look at how they choreographed and made the fight scenes.

Philosophy in Combat: Mixed Martial Arts Strategy (HD, 21 Mins.) – Another great look with some real MMA fighters talking about their sport and how well it was portrayed in the movie.

Simply Believe: A Tribute to Charles Lewis Jr. (HD, 14 Mins.) – A tribute to the Tapout founder.

‘Warrior‘ is a wonderful and powerful movie that is not soon forgotten. The message of forgiveness and family is top notch with some excellent performances by all involved. The HDR10 image is exquisite and the Dolby Atmos soundtrack is a worthy upgrade for sure. The bonus features are all worth watching and listening to. This 4K UHD release is HIGHLY RECOMMENDED!