Back in 2008, Mark Millar and John Romita Jr. created a new comic book that was kick-ass, that they in fact named it ‘Kick-Ass‘. It was basically Spider-Man if Spider-Man had no superpowers and was had a hardcore R rating. The amount of creative energy, violence, comedy, and character development that went into the comic was magical as it was entertaining and wonderful. Millar just had a way with words and story plot that made this comic book called ‘Kick-Ass‘ solid gold. It was to nobody’s surprise that only two years later, we got a feature film directed by Matthew Vaughn (Layer Cake, X-Men: First Class, Kingsman) and produced by Brad Pitt, that ignited a new breed of R rated superhero films.

At some point, Dave and his friends are tired of seeing others robbed and beaten up on the street, and after this happens to Dave himself, he purchases a scuba outfit that doubles as a superhero outfit. His first outing to fight crime, he is stabbed and run over by a car, leaving him in the hospital for a long time. Turns out, that his multiple surgeries put metal plates through his limbs and made his nerve endings out of whack in that he doesn’t feel pain anymore. This enhances his new persona, which he dubs Kick-Ass.

When he is filmed defending a guy from being beat up, two other people take notice, who are dubbed as Hit-Girl and Big Daddy, who are a 10 year old girl who can kill anyone in a matter of seconds, and her father, who resembles Batman. The three try and fight crime as usual, but the big city kingpin and his son want to take out this new trio. It’s a classic setup, but done with an original voice and ultra violence that you’ve never seen before. The humor and wit throughout are also oddly charming, which you can’t seem to get enough of.

Just when you think one character or story line is going one way, it swerves the other direction in the best of ways. The characters are super fun to hang out with on screen and it all seems plausible. The score is out of this world and epic and the performances, especially by Chloe Grace Moretz as Hit-Girl and Nic Cage as Big Daddy are iconic. ‘Kick-Ass‘ is one of those films that you’ll never forget an d want to revisit often. Let’s hope there are many more sequels to come. 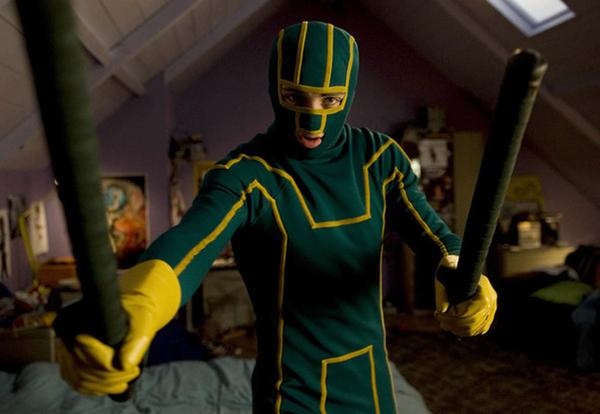 The Video: ‘Kick-Ass‘ comes with two options. One disc has the 4K UHD version with a HEVC/H.265 encoded 2160p transfer and is presented in 2.40:1 aspect ratio. This is also has the Dolby Vision and HDR10 option, which is definitely an improvement on the standard Blu-ray version. Needless to say, this 4K UHD Disc is just about everything you’d want in this upgraded format and is the only way to watch this movie, despite a few minor issues. The clarity and detail is impressive with every tiny stitch in the superhero costumes showing up nicely. The way they look with all of their nuanced colors changing in the different lighting and gun shot blasts look fantastic.

Details in the makeup, individual hairs on the actor’s faces and background objects in the box factory and the comic books store look magnificent. You’ll be able to distinguish every tiny detail. Colors are bright, bold, and simply pop off screen, and even change during the many well-lit sequences throughout the film. The black levels are deep and inky and the skin tones are natural. There were some instances of video noise here and some minor judder, but overall, this image is a high improvement on the previous standard Blu-ray release.

The Audio: This UHD release of ‘Kick-Ass‘ has an English: Dolby Atmos track, where I used a 7.1.2 Atmos speaker setup with the normal 7.1 surround and two overhead speakers, plus a subwoofer powering this sci-fi soundscape. The standard Blu-ray version has a DTS-HD 7.1 MA mix. This just a top notch audio presentation with this new Atmos track. The overhead speakers boom with sound as gunshots, kicks, punches, and takedowns come often through the speakers. The sound effects are robust, lively, and pack a powerful blast as the heavier action elements are shown.

The weapons that are used always make the appropriate noises, whether it be a knife swish or clank, or a wooden object. It’s quite theatrical.  Your speaker system will sure get a work out here. The bass is always in high gear, but never rocky and the score always adds to the comedy and suspense in each scene without drowning out any other sound aspect. In fact, the score is rather memorable, dynamic, and very epic. Dialogue is always crystal clear and easy to follow, and free of any pops, cracks, hiss, or shrills. This is a damn good audio presentation.

Audio Commentary – Director Matthew Vaughn talks about making the film, adapting the comic book,  casting the roles, the storyline, and much more. There isn’t much emotion in this commentary as Vaughn is rather dry, but it’s informative.

A New Kind of Superhero: The Making of Kick-Ass (HD, 113 Mins.) – Now this is a bonus feature. An in depth look in four parts on all aspects of the making of the movie, from stunts, casting, shooting on location, the comic, and more.

It’s On! The Comic Book Origin of Kick-Ass (HD, 20 Mins.) – The creators of the comic all talk about the origins of the characters and the storyline.

The Art of Kick-Ass – Tons of images in a gallery that showcase comic art, storyboards, production stills, and more.

Marketing Archive (HD, 6 Mins.) – Posters and trailers for the film. 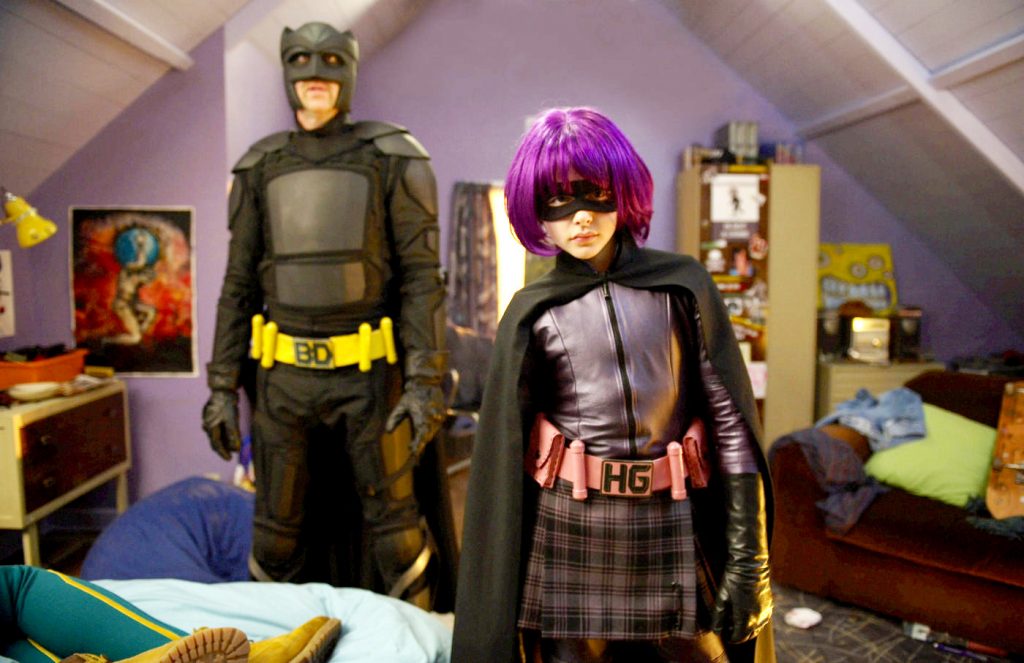 ‘Kick-Ass‘ has a lot of heart and is tons of fun. It’s also one of the better superhero movies to ever be released with great characters, storylines, which perfectly adapted from comic to screen. It just doesn’t get better than this, plus Nic Cage’s performance is legendary as is the character Hit-Girl. The upgraded 4K UD video and Dolby Atmos track are top notch and the extras are out of this world good. MUST-OWN!