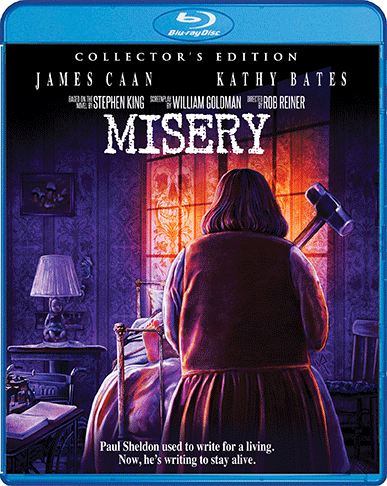 Scream Factory presents ‘Misery‘ in a 2-disc collector’s edition Blu-ray set that will arrive November 28, 2017. From the chilling mind of Stephen King, ‘Misery‘ is based on his novel of the same name. If you’ve read the story, you wince at the thought of Annie Wilkes with an axe, but if you’ve watched the movie, you’ve cringed when you think of  Kathy Bates with a sledgehammer. A role that will lead Bates to accept an Academy Award for her off-center portrayal of the crazed #1 fan, Annie Wilkes.

The film may have taken a different route to keeping the writer hobbled, and it’s definitely memorable. What writer you ask? Why Paul Sheldon, of course. Novelist Paul Sheldon doesn’t remember the blinding blizzard that sent his car spinning off the road. He doesn’t remember being nursed back from unconsciousness. But he will never forget Annie Wilkes. As Paul (James Caan) recuperates from his injuries in the secluded cabin of his benefactor Annie (Kathy Bates), he begins to discover that beneath the seemingly kind and naive exterior of his self-described “number one fan” lurks a mind that is cunning, unhinged, and bent on keeping her favorite writer as her personal prisoner for the rest of his “cock-a-doodie” life … and Sheldon must engage his savior-turned-captor in a battle of wills that will push them both to the brink.

· “Advice For The Stalked” Featurette

· “Profile Of A Stalker” Featurette