One of the things I look forward to in life are more Chucky movies. I don’t know why, but that seems to have been the case since Chucky terrorized all of us back in 1988 with ‘Child’s Play‘. There’s just something fun and horrifying about the universe of Chucky that always had me clamoring for more films. ‘Child’s Play 2‘ and ‘Child’s Play 3‘ furthered the story along while playing to the same silly-horror tropes of each previous film. Still, they were fun and entertaining.

A few years went by and the Chucky franchise took a turn towards to the over-the-top dark comedy and breaking the fourth wall with ‘Bride of Chucky‘ and even more so with ‘Seed of Chucky‘ that found the murderous doll in sex scenes and having children. While being so silly, there really wasn’t any horror aspect to it and we didn’t get our main protagonist Andy Barclay (Alex Vincent) in those last two films. While I appreciate the direction those two films took and even an appearance by long time Chucky fan John Waters had me giddy, the overall tone and horror of it all was lost. That is until the original writer and creator of the story and first film Don Mancini and David Kirschner got together and made ‘Curse of Chucky‘, which brought the film franchise back to its horror roots and even had a bit of backstory on Charles Lee Ray. It was a good film that mixed the absurd with horror and dark comedy very well and set the scene up for multiple sequels, especially with it’s ending where a returning Alex Vincent reprised his role for the first time since ‘Child’s Play 2‘ as a grown up Andy. 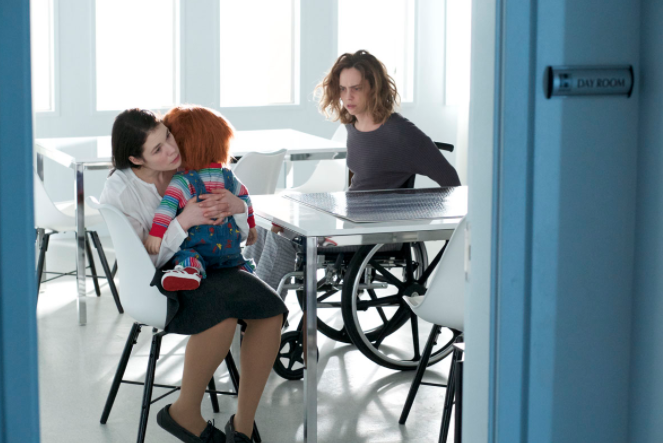 Now we’re in 2017 and we have ‘Cult of Chucky‘ from Mancini, Kirschner, and Brad Dourif returning as the voice of Chucky in a very original and fun sequel to the horror film franchise. By no means at all should a 7th film of any franchise be this good, but holy hell – it is. After the events of ‘Curse of Chucky’, we find Nica (Fiona Dourif) in a mental hospital as she’s been convinced and brainwashed that she was responsible for all of the deaths in the last film, but really – it was all Chucky. Nica is surrounded by other patients, some of which have schizophrenia, others who have killed their own children, and even a doctor who is even worse than Nurse Ratched. Meanwhile, Andy Barclay has been torturing Chucky by having his head on a stick and inflicting pain on him. Somehow though, Chucky has found a way to transfer his soul into multiple people at the same time in the form of other Chucky dolls that make their way to the mental hospital. So instead of one Chucky doll on the loose, there are several, and all have the soul of that murderous serial killer, along with his famous dark sense of humor and one-liners. 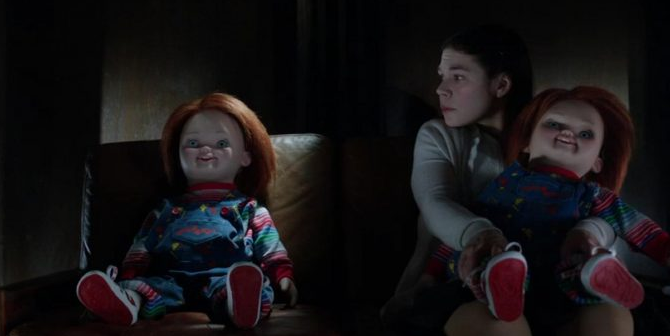 What’s great about this film is that it dives deeper into the voodoo curse without overly explaining anything, but simply showing how the voodoo curse works and what it’s capable of like we’ve never seen before. What Mancini has done visually here is make the locations completely devoid of any color, specifically in the hospital where every wall, ceiling, and floor is a polished bright white. It’s even winter time too, so snow falls, which leaves the blue clothed and red haired Chucky doll stand out perfectly, not to mention the buckets of red blood that splashes all over these white settings. It’s genius. There is a ton of psychological horror to the film too. With the mad doctors and their unethical treatment that conjure up nightmares with horrific imagery, the story really has that good horror element through and through.

Don’t worry though, that iconic dark comedy is present too as Chucky stalks and kills each victim that will for sure make you applaud. Characters from previous films show up too and looks like they will be sticking around for at least another film. I just wish these movies would get a wide theatrical release. Chucky begs to be seen on the big screen in front of a big crowd, rooting for it all. All of the performances are top notch here and it’s always great to hear Brad Dourif reprise his maniacal voice for Chucky. I just love every bit of ‘Cult of Chucky‘ and I know you will too.