Pirates of the Caribbean: Dead Men Tell No Tales Coming To Home Video!!! 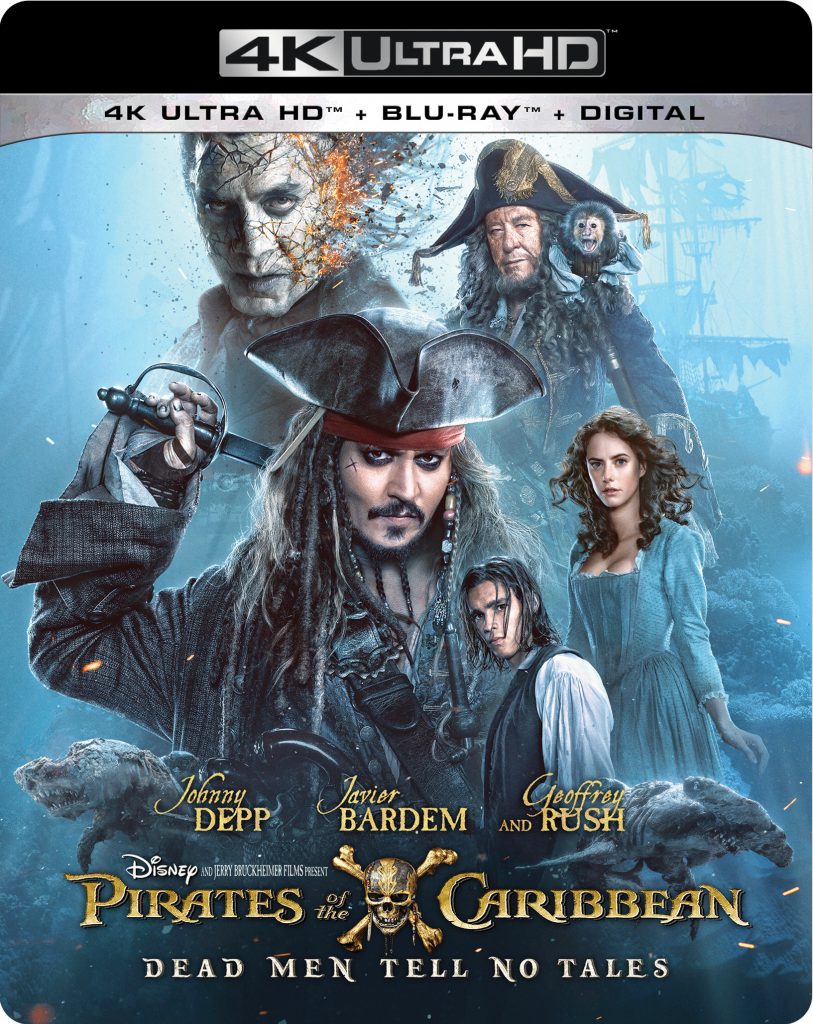 From Disney and Jerry Bruckheimer Films comes ‘Pirates of the Caribbean: Dead Men Tell No Tales‘, the fifth film in the now iconic, POTC film franchise. The film will sail onto Digital in HD and 4K Ultra HD September 19, and on 4K Ultra HD/Blu-ray Combo Pack, DVD and On-Demand October 3.

“Pirates of the Caribbean: Dead Men Tell No Tales” is a rollicking new tale of the high seas, infused with all the elements of fantasy, humor and action that have resulted in an international phenomenon for the past 13 years. Johnny Depp returns to his Academy Award-nominated role as the outrageous, swashbuckling scoundrel Captain Jack Sparrow, and is joined by Oscar winners Javier Bardem (Best Supporting Actor, “No Country for Old Men”) and Geoffrey Rush (Best Actor, “Shine”).

Bonus material includes a collection of behind-the-scenes, making-of stories, including a conversation with directors Joachim Rønning and Espen Sandberg; a sit-down with the two young newcomers who play Henry and Carina; the secrets behind the menacing new villain, Salazar, and his ferocious ghost sharks; an on-set visit with Jack’s first mate from all five films; a chat with Sir Paul McCartney who appears as Uncle Jack; and a discussion about the franchise’s legacy; along with hilarious bloopers, deleted scenes and memories from producer Jerry Bruckheimer’s photo diary.

Dead Men Tell More Tales: The Making of a New Adventure – Get unique access into the making of this exciting new “Pirates of the Caribbean” movie with this collection of revealing and entertaining stories that you can view individually or as a “play all.”

A Return to the Sea – Two talented filmmakers, Joachim Rønning and Espen Sandberg, team up to bring “Pirates of the Caribbean” back to the screen. Hear how this new chapter of the tale was developed.

Telling Tales: A Sit-down with Brenton & Kaya – Meet Brenton Thwaites and Kaya Scodelario, the young actors behind Henry and Carina. The two sit down together for a revealing conversation on becoming a part of the “Pirates of the Caribbean” film franchise and its continuing legacy.

The Matador & The Bull: Secrets of Salazar & The Silent Mary – Oscar-winner Javier Bardem reveals more about his menacing new character and the foreboding ship he helms.

Deconstructing the Ghost Sharks – Peer below the depths at how these ferocious, mythical monsters were designed and brought to life.

A Whale in Poseidon’s Tomb