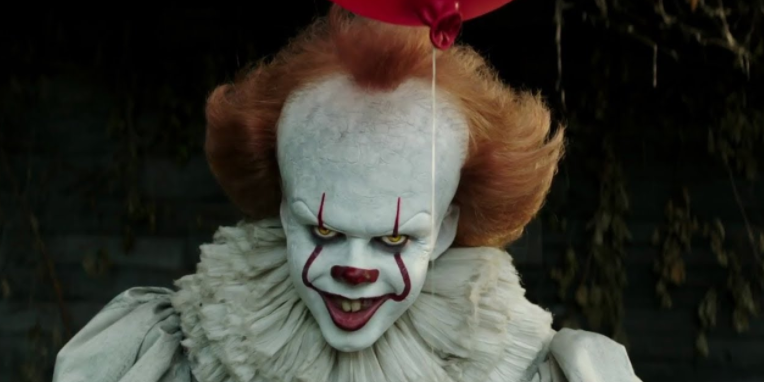 Pennywise the Dancing Clown is back in Derry, Maine after a long hiatus and troubled production. Despite the production issues, this modern version of Stephen King’s IT is a success in many ways, but has a few tiny flaws. Let me just say that if you have a phobia or are scared of clowns in any way, this film will be quite frightening  for you. Bill Skarsgard fills the shoes of a 1993 Tim Curry as Pennywise the Clown and does a very good job. It’s not the same playful Pennywise from the 90s TV movie though. His outfit is different and Pennywise this time around seems more sinister and attacks his victims faster and more violently as we see in that first opening scene with little Georgie looking for his paper boat that went into the sewer.

Andy Muschietti took over as director here and mostly stuck to the book, which is a good thing. There were so many aspects and scenes that were not TV appropriate in the 90s that took place in the book, but now that we have a hard R movie, we can see the truly evil side of IT. The book takes place in the 1950s, but Warner Bros. and Muschietti thought it would be a great idea for the kid’s section of the story to take place in the 1980s from the success of Netflix’s Stranger Things. It’s fun to see all of the 80s references throughout the film too, which brings me to the comedy aspect of the film, which is surprising. I didn’t expect to laugh as much as I did during the film. That’s not a fault either, because the dialogue of the all the kids felt real and extremely funny. The way they talked with each other with their sex and mom jokes were all perfectly delivered. But on the turn of a dime, things could get serious and violent very quickly.

If you’re unfamiliar with Stephen King’s IT, the story is set in a small town of Derry, Maine, where a ton of kids consistently go missing and die. There is an evil lurking in the town in the form of a shapeshifting Clown named Pennywise who feeds on children – literally. A group of young kids in town band together to try and destroy it without their worst fears coming to life. The film works best when the group of kids are together. Their back and forth banter, as well as their coming together always hits the right notes and when they’re not onscreen, you’ll wish they all were. In order to create some character development in this 135 minute film, we get to spend some one-on-one time with each character, experiencing their home life and their scariest fears come to fruition at the hands of Pennywise.

This is where the film feels cliched and rushed. Every scary scene has been done numerous times in other films and uses more jump scare tactics than it should. How many times do we need to see someone slowly walk down a dark hallway, open a creaky door, or see a creepy kid who laughs, which is when the music goes completely silent and the Clown appears with a big music crescendo and sharp teeth. It’s just redundant and gets tiresome. During the final act of the film though, things change for the better and becomes truly frightening. All of the kids do an amazing job in their roles of getting bullied, being afraid, and even gaining enough confidence to tackle their enemies and fears. With all of that, they still have time to be kids and very funny too.

The book is split into two parts as was the 1993 TV movie. One section follows the kids, which continues into the second section of the kids who have grown into adults who come back to Derry to battle IT one last time. What this new film does is build the characters so well, that you can’t wait for the second part to release. If you’re scared of clowns, I have no doubt you will have nightmares here, but I didn’t find the film all that scary. I still find Tim Curry’s Pennywise performance scary-as-hell, but with Skarsgard’s take, while it’s still good, didn’t frighten me at all. This version of IT succeeds in a lot of ways and I can’t wait to see the second film.