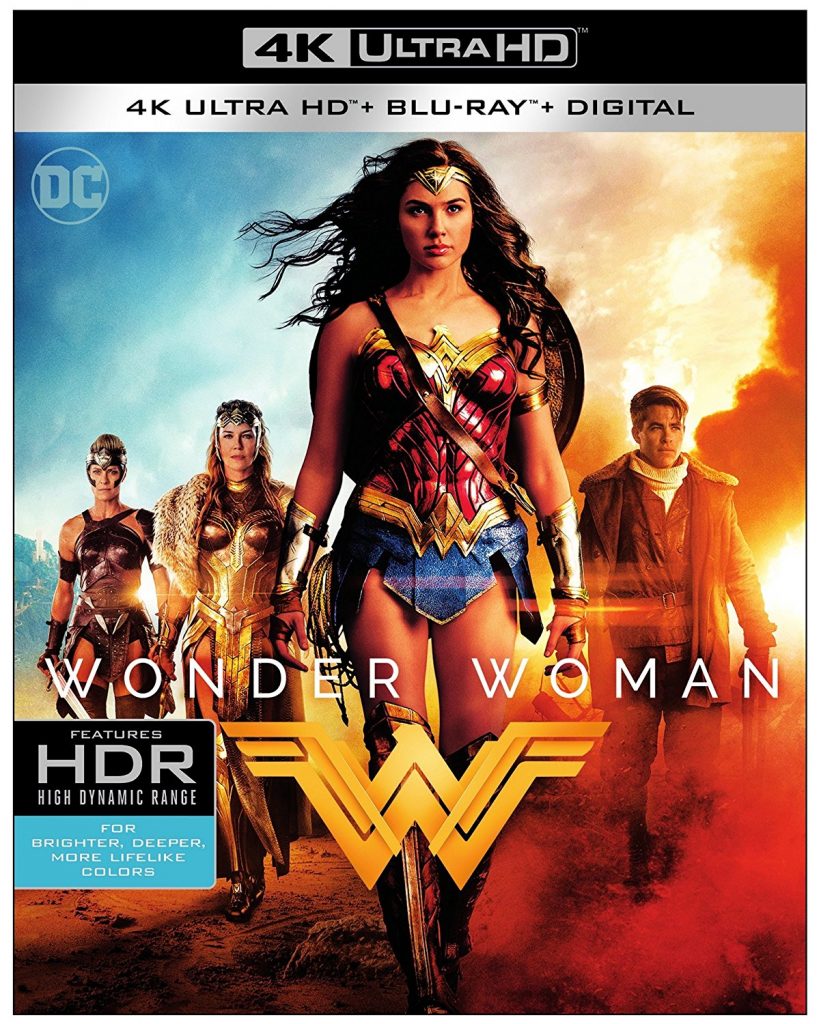 The Warner Bros./DC Comics Cinematic Universe has been trying to get off its feet for a while now with no success, besides some decent box office money. However, most people would tell you that the new DC Comics‘ films are just not up to par with their rivals over at Marvel for many reasons. These people would be right. Perhaps one of the best moments of Batman v Superman was in fact Gal Gadot as Wonder Woman. It was just a shame she only had a few minutes of screen time in that film. The rest was mostly trash. Luckily, Warner Bros. and DC Comics decided to finally make a Wonder Woman movie, which is the first superhero film to feature a female superhero as its main protagonist, as well with a female director with Patty Jenkins. The result is satisfying, making Wonder Woman a damn good film with a few flaws.

First off, Patty Jenkins hasn’t done much in the way of film, other than bring us that amazing movie from 2003 called Monster that starred Charlize Theron and Christina Ricci about a real life serial killer. Jenkins hasn’t made a feature film since then. In this 14 year hiatus from feature films, Jenkins has not missed a beat by any means and fully captured all of the wonderful moments of Wonder Woman. There was not one single moment where I thought that Gal Gadot didn’t own this character with grace, raw emotion, and pure strength, and bravery. She brought Wonder Womanto life in every single frame here. Set during a fictionalized WWI era, Captain Steve Trevor (Chris Pine), crashes his plane inside the magical and hidden island of Themyscira, where Diana Prince/Wonder Woman and the Amazons live.

We get a fantastic origin story that is quick paced and introduces some great characters. Perhaps the most standout here is General Antiope, who is the sister of Hippolyta and Diana’s aunt played by the impressive Robin Wright (Penn). I seriously want a prequel movie that focuses on this character. After Diana rescues Trevor, she realizes that war is upon them, which brings the two of them to the “real world” to stop General Erich Ludendorff (Danny Huston), the leader of the German Army from killing the masses all over the world. Not only do we get to see Diana turn into Wonder Woman, but we get to see her discover her powers and use those famous weapons of hers, and it’s quite the sight to see. We see her transition into this superhero we’ve seen in the comics and other TV shows before and it’s simply glorious and well executed.

In addition to that, we get some fantastic one-on-one scenes with Pine and Gadot, discussing what it’s like to be human and a man. All of these charming and funny conversations have the usual jokes that you’d expect here, but they come across fresh, witty, and adds some genuine relatable character traits to both parties. Everyone seemed to worked well and had dynamite chemistry on screen, which allows us to bond with these characters in such a short time.

Unfortunately now, I have to discuss some of the things I didn’t love about the film. This is a 141 minute film, but it feels like 90 minutes, that is up until that last 15 or so minutes during the big battle scene. Whatever came before this was different, original, and didn’t look like those dark, gloomy previous DC films that we have hated. However, during this climactic battle end scene, things get cheesy real quick and just nose dives as if we were watching the same end fight scene from Batman v Superman. It didn’t ruin the whole movie though by any means.

Also, I know Warner Bros. will forever love Zack Snyder for his work in 300. Snyder’s style is used in every one of his films, particularly the fast to slow motion fight scenes, which his work is clearly evident here in Wonder Woman. I can stand by doing this in key moments, but doing this effect in almost every edit of fighting is redundant and takes you out of the moment of the film. It happens to much and therefor becomes an annoyance. Other than that, Wonder Woman is again, a damn good movie. This is what every future DC Comics film needs to strive to be like with excellent performances, a good scripts, intimate moments, and great storytelling. 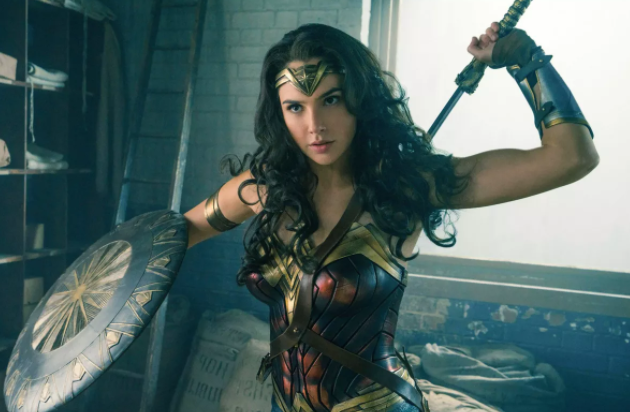 The Video: Wonder Woman comes with a 4K UHD Disc with an HVEC H.265 encode and is presented in 2.40:1 aspect ratio. Partyle shot on the old school 35mm film and the other part digitally, the film looks exquisite in 4K and is a nice upgrade from the Blu-ray version. Most of the film has a dark, steely blue look to it, which is a style choice, but nevertheless still looks amazing. The filmmakers even used blue smoke in the battle scenes, because it looked better than the standard gray or white smoke against the background and costumes. From the cool, icy backdrops of London during WWI to the war torn battlefields, there isn’t a ton of color that pops brightly, besides the golden lasso of truth, which is bright and bold. The beginning 20 minutes of the film is set Themyscira, which looks to be a luscious tropical island with sunny, blue skies and tons of bright green plant life. This is the brightest part of the film, color-wise, and it’s rich and beautiful in each scene.

For the rest of the film, colors are mostly subdued, but it’s a stylistic choice and never hinders the movie-watching experience. Wonder Woman’s outfit has that metallic blue, gold, and red look and is quite eye-popping. In the final act of the film, there is a ton of fire and brimstone, which brightens up the darkness quite a bit too. But keeping with the DC feel of these darker super-hero films, Wonder Woman is no different, besides that opening 20 minutes on the island. Detail is sharp and vivid and showcases every facial pore, individual hair, wound, scar, and makeup effect nicely. The textures of Wonder Woman’s outfit and the heavy uniforms all the men wear look incredible. Wider shots all look detailed and never soft. Heavy CGI effects never look murky or pixelated either, but instead very detailed. Black levels are deep and inky with no crush and skin tones are always natural. They did an outstanding job on this video presentation.

The Audio: This release comes with a great Dolby Atmos track that only adds the big height atmospherics here, which is quite good. Of course, sound effects are loud, robust, and full of life. Every hit, kick, and takedown sounds excellent with great dynamics and directionality. The slow-motion swishes and swooshes add a cartoonish aspect to the sound, but it all works well. Every clank from a bullet that hits Wonder Woman’s wrist bracelets pack a punch too. Ambient noises of other gun-fire, screams, and people talking are fantastic as well and fully engulf the soundscape.

When buildings explode, planes fly, and bullets zoom overhead, the height speakers really knock it out of the park and adds that extra layer of sound and immersion. Dialogue is always clear and easy to follow along without any pops, cracks, hiss, or shrills. The score isn’t my favorite, but always adds to the suspense and action part of each scene. In addition to the loud sound effects, the quieter moments are just as dynamic and moving. 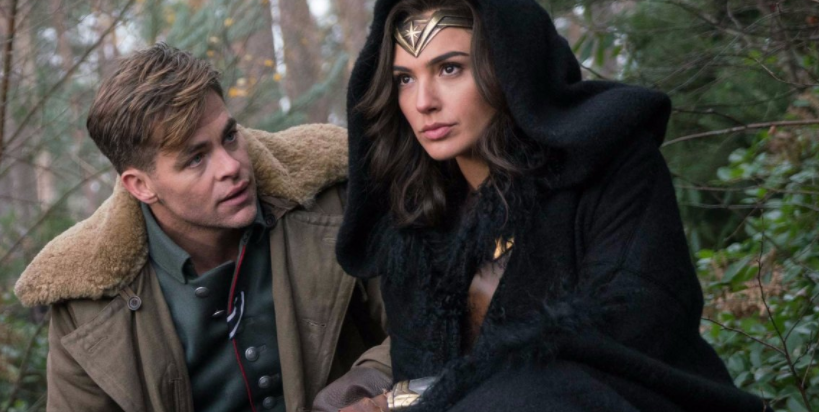 Finding the Wonder Woman Within (HD, 23 Mins.) – The cast and crew talk about how the character has inspired many people over the years with discussions on her traits, meaning, and looks.

Crafting the Wonder (HD, 16 Mins.) – This is a longer EPK promo reel with cast and crew interviews and a lot of great behind-the-scenes footage.

The Trinity (HD, 16 Mins.) – Here is another talk on how Wonder Woman fits into the whole DC Universe with an emphasis on Batman and Superman.

The Wonder Behind the Camera (HD, 16 Mins.) – This is a cool look at most of the women who worked on the film in various crew positions.

Warriors of Wonder Woman (HD, 10 Mins.) – This shows a lot of the stuntwork and training that went into each actress for their Amazon roles.

Wonder Woman at War (HD, 6 Mins.) – A ton of behind-the-scenes footage for the No Man’s land scene with cast and crew interviews.

Themyscira: The Hidden Island (HD, 5 Mins.) – This shows the filmmakers and actors filming on an actual island and what into it.

Beach Battle (HD, 5 Mins.) – The cast and crew talk about how much work it took to make the island battle sequence.

A Photograph Through Time (HD, 5 Mins.) – This goes into that famous black and white photo that seems to come up in a few DC movies.

Diana in the Modern World (HD, 5 Mins.) – Here’s some more interviews on Wonder Woman’s thoughts on a modern world.

Deleted Scenes (HD, 7 Mins.) – There are four deleted and extended scenes here, all of which are worth watching, but add nothing to the final film.

‘Wonder Woman‘ is a damn fine film and has put DC on a good path for films, hopefully in the future. Patty Jenkins, Gal Gadot, and Chris Pine really bring this film to life and despite its flaws, Wonder Woman is a excellent on multiple viewings. The video and audio presentations are both excellent and there are a ton of extras, all of which are worth watching.