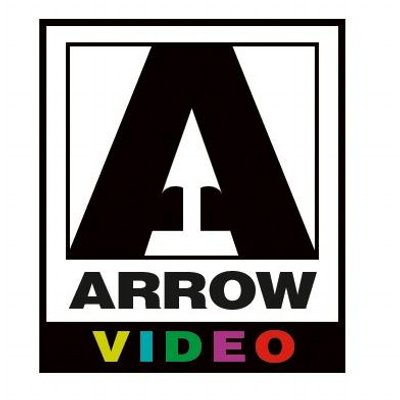 The summer really heats up in August, as Arrow Video releases a special edition of an 80s classic, a white-knuckle thriller, a splatter horror masterpiece, a box set of crime classics, a rare Italian sword-and-sandal epic, and an amazing new limited edition steelbook.

First up, one of the most wildly popular horror movies of all-time, Stuart Gordon’s enduring splatter-comedy classic Re-Animator returns to Blu-ray in a stunning restoration packed with special features. According to the distributor (MVD), this awesome package is officially sold out already, which means fans will need to hunt it down in a hurry if they hope to own it.

This month also sees the Blu-ray release of the star-studded, action-packed crime thriller Ronin, from master director John Frankenheimer (Seconds, The Manchurian Candidate), starring Robert De Niro (Taxi Driver, Heat), Jean Reno (Léon: The Professional) and Sean Bean (Stormy Monday, Game of Thrones). A fantastically entertaining heist-gone-wrong crime caper, featuring one of the greatest car chases ever committed to film, Ronin is presented in a brand new, cinematographer-approved 4K restoration, along with a host of behind the scenes featurettes, with a reversible sleeve, and a collector’s booklet with the first pressing.

August also sees the Dual Format release of controversial splatter classic The Slayer, JS Cardone’s gruesome 80s chiller about a group of friends trapped on a remote island and stalked by a crazed killer. The infamous slasher film, previously only been available on home video in truncated or full screen versions, comes lovingly restored from the original negative, in a stunning transfer that will be a revelation to fans both old and new; and the first pressing includes a collector’s booklet with brand new writing on the film.

Then there is the Dual Format release of New Battles Without Honour And Humanity – The Complete Trilogy, the 1970s Japanese crime classic series making its UK English-language home video debut. From legendary Battle Royale director Kinji Fukasaku, starring Bunta Sugawara in three separate yakuza stories set in various parts of Japan, the films are hard-boiled and action packed, and the limited edition set features new subtitle translations, a host of extras and a collectible book.

Next up, the Dual Format release Erik the Conqueror, a 1961 sword-and-sandal epic from Italian supremo Mario Bava, a rare detour from the master director away from genre thrillers like Rabid Dogs and A Bay of Blood. Inspired by the Kirk Douglas hit The Vikings, this is a tale of treachery, heroism and forbidden love starring George Ardisson (Juliet of the Spirits) in the title role, and Hollywood legend Cameron Mitchell (Blood and Black Lace). Restored in high definition for the first time, and packed with extras, as well as a collector’s booklet with the first pressing, this is a must for Bava fans and lovers of spectacular swashbucklers.

And finally, after producing Stuart Gordon’s hit Re-Animator, Brian Yuzna (Bride of Re-Animator,Return of the Living Dead III) turned his hand to directing with 1989’s Society, and gave birth to one of the ickiest, most original body horror shockers of all time. This time, Arrow delivers the film in the form a sleek sexy limited edition steelbook, sure to sell out quickly. 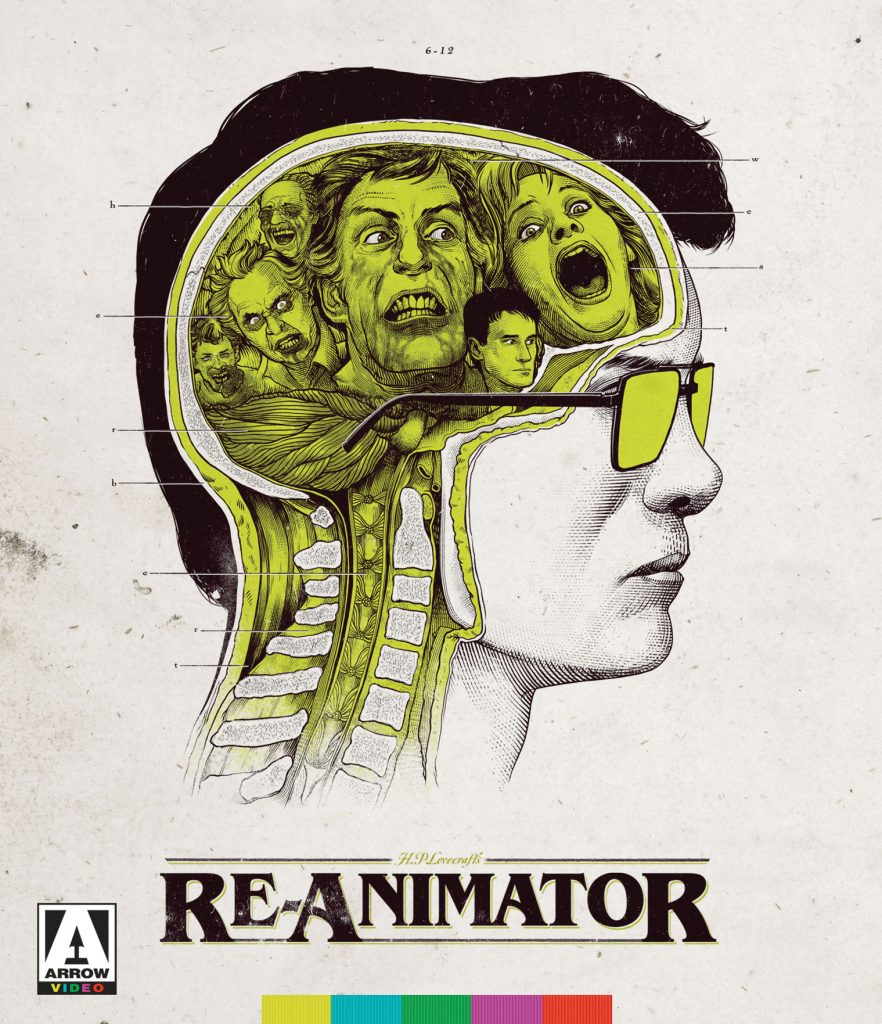 HERBERT WEST HAS A GOOD HEAD ON HIS SHOULDERS… AND ANOTHER ONE ON HIS DESK.

One of the most wildly popular horror movies of all-time, Stuart Gordon’s enduring splatter-comedy classic Re-Animator returns to Blu-ray in a stunning restoration packed with special features!

When medical student Dean Cain advertises for a roommate, he soon finds one in the form of Dr. Herbert West. Initially a little eccentric, it some becomes clear that West entertains some seriously outlandish theories – specifically, the possibility of re-animating the dead. It’s not long before Dean finds himself under West’s influence, and embroiled in a serious of ghoulish experiments which threaten to go wildly out of control…

Based on H.P. Lovecraft’s classic terror tale Herbert West – Reanimator and featuring a standout performance from Jeffrey Combs as the deliciously deranged West, Re-Animator remains the ground-zero of ’80s splatter mayhem and one of the genre’s finest hours. 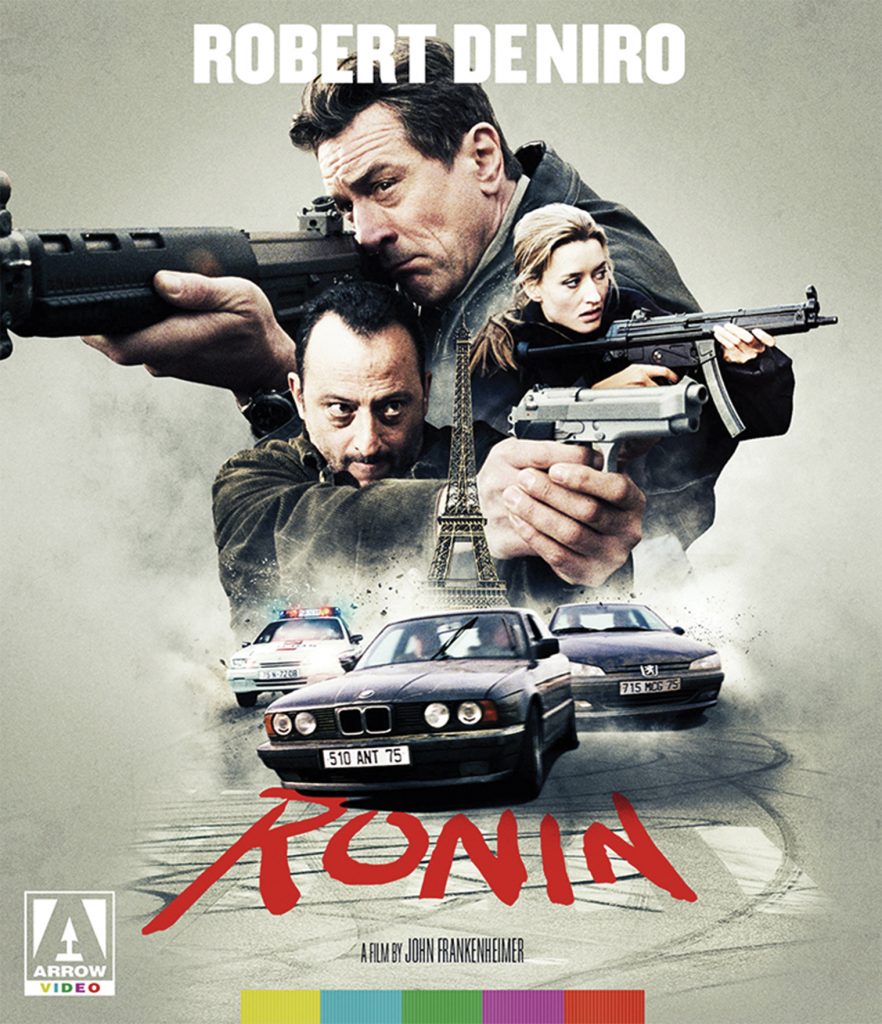 RONIN. Noun, historical. A samurai who no longer serves a daimyo, or feudal lord.

On a rain-swept night in Paris, an international crack team of professional thieves assembles, summoned by a shady crime syndicate fronted by the enigmatic Deirdre (Natascha McElhone, The Devil’s Own). Their mission: to steal a heavily guarded briefcase from armed mobsters, its contents undisclosed. But what begins as a routine heist soon spirals into chaos, with the group beset by a series of double-crosses and constantly shifting allegiances, and it falls to world-weary former CIA strategist Sam (De Niro) and laconic Frenchman Vincent (Reno) to hold the mission together.

A latter-day return to form for Frankenheimer, the film evokes the same gritty milieu as classic 70s crime fare like The French Connection, in addition to anticipating the early 21st century trend towards more grounded, realistic action movies, exemplified by the likes of the Bourne franchise.

Arrow Video is proud to present Ronin in a brand new, cinematographer-approved 4K restoration, allowing this jewel in the crown of 90s thriller cinema to shine like never before. 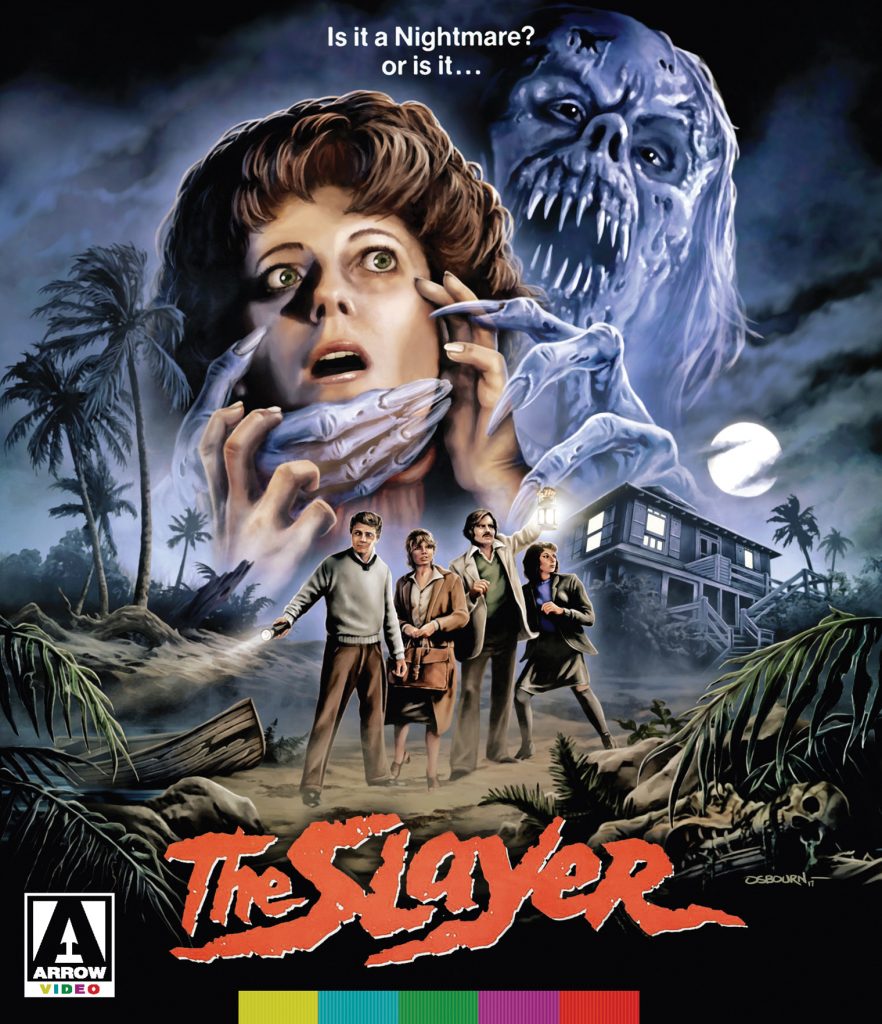 IS IT A NIGHTMARE? OR IS IT… THE SLAYER?

One of the most sought-after titles for slasher fans everywhere, The Slayer finally rises from the ashes of obscurity in a brand new 4K transfer courtesy of Arrow Video.

Two young couples set off to a secluded island for what promises to be a restful retreat. But the peace is short-lived: as a storm batters the island, troubled artist Kay begins to sense that a malevolent presence is here with them, stalking them at every turn. Is she losing her mind, or are her childhood nightmares of a demonic assailant coming to terrifying life?

Previously only available on home video in truncated or full screen versions, The Slayer – whose nightmares-seeping-into-reality theme predates a certain Wes Craven classic by several years – comes lovingly restored from the original negative in a stunning transfer that will be a revelation to fans both old and new. 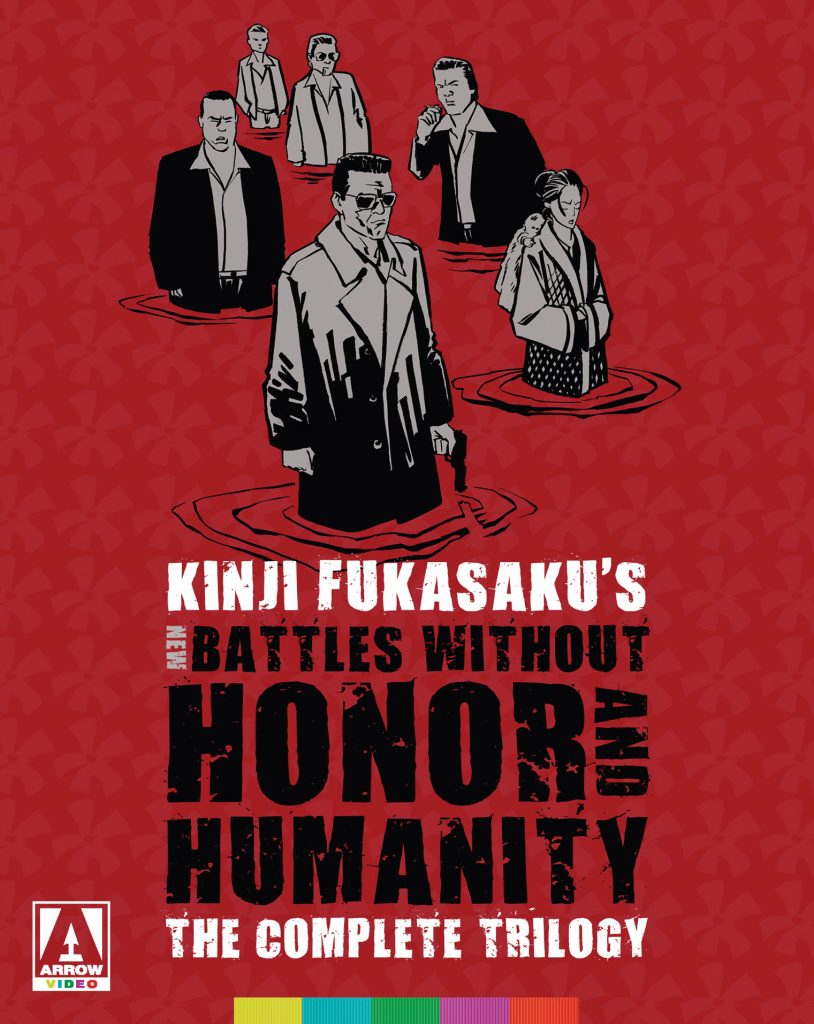 In the early 1970s, Kinji Fukasaku’s five-film Battles Without Honor and Humanity series was a massive hit in Japan, and kicked off a boom in realistic, modern yakuza films based on true stories. Although Fukasaku had intended to end the series, Toei Studio convinced him to return to the director’s chair for this unconnected, follow-up trilogy of films, each starring Battles leading man Bunta Sugawara and telling separate, but fictional stories about the yakuza in different locations in Japan.

In the first film, Bunta Sugawara is Miyoshi, a low-level assassin of the Yamamori gang who is sent to jail after a bungled hit. While in stir, family member Aoki (Lone Wolf and Cub’s Tomisaburo Wakayama) attempts to seize power from the boss, and Miyoshi finds himself stuck between the two factions with no honorable way out.

In the second entry, The Boss’s Head, Sugawara is Kuroda, an itinerant gambler who steps in when a hit by drug-addicted assassin Kusunoki (Tampopo’s Tsutomu Yamazaki) goes wrong, and takes the fall on behalf of the Owada family, but when the gang fails to make good on financial promises to him, Kuroda targets the family bosses with a ruthless vengeance.

And in Last Days of the Boss, Sugawara plays Nozaki, a laborer who swears allegiance to a sympathetic crime boss, only to find himself elected his successor after the boss is murdered. Restrained by a gang alliance that forbids retributions against high-level members, Nozaki forms a plot to exact revenge on his rivals, but a suspicious relationship with his own sister (Chieko Matsubara from Outlaw: Gangster VIP) taints his relationship with his fellow gang members. 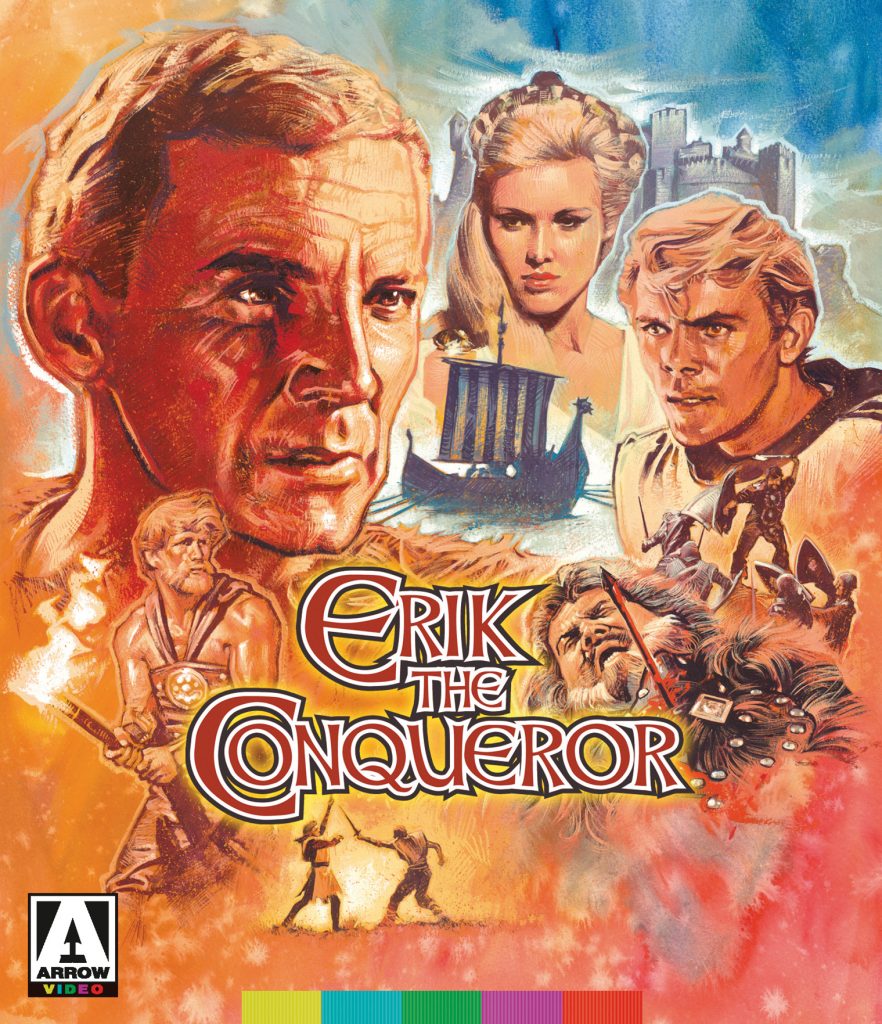 In 1961, director Mario Bava (Rabid Dogs, Kill Baby Kill) turned his hand to the historical adventure genre, capitalizing on the recent success of 1958’s Kirk Douglas vehicle The Vikings. The result was a colorful, swashbuckling epic of treachery, heroism and forbidden love: Erik the Conqueror.

In 786 AD, the invading Viking forces are repelled from the shores of England, leaving behind a young boy – Erik, son of the slain Viking king. Years later, Erik (George Ardisson, Juliet of the Spirits), raised by the English queen as her own, becomes Duke of Helford, while across the sea, his brother Eron (Cameron Mitchell, Blood and Black Lace) assumes leadership of the Viking horde and sets his sights on conquering England once again, setting the two estranged brothers on a collision course that will determine the fates of their respective kingdoms…

Now restored in high definition for the first time, Arrow Video is proud to present this cult classic in all its original splendor.

FEATURES
– Brand new 2K restoration of the film from the original camera negative
– High Definition Blu-ray (1080p) and Standard Definition DVD presentations
– Original Italian and English mono audio (lossless on the Blu-ray Disc)
– Newly translated English subtitles for the Italian soundtrack
– Optional English subtitles for the deaf and hard of hearing for the English soundtrack
– New audio commentary by Tim Lucas, author of Mario Bava – All the Colors of the Dark
Gli imitatori, a comparison between Erik the Conqueror and its unacknowledged source, The Vikings
– Original ending
– Reversible sleeve featuring original and newly commissioned artwork by Graham Humphreys 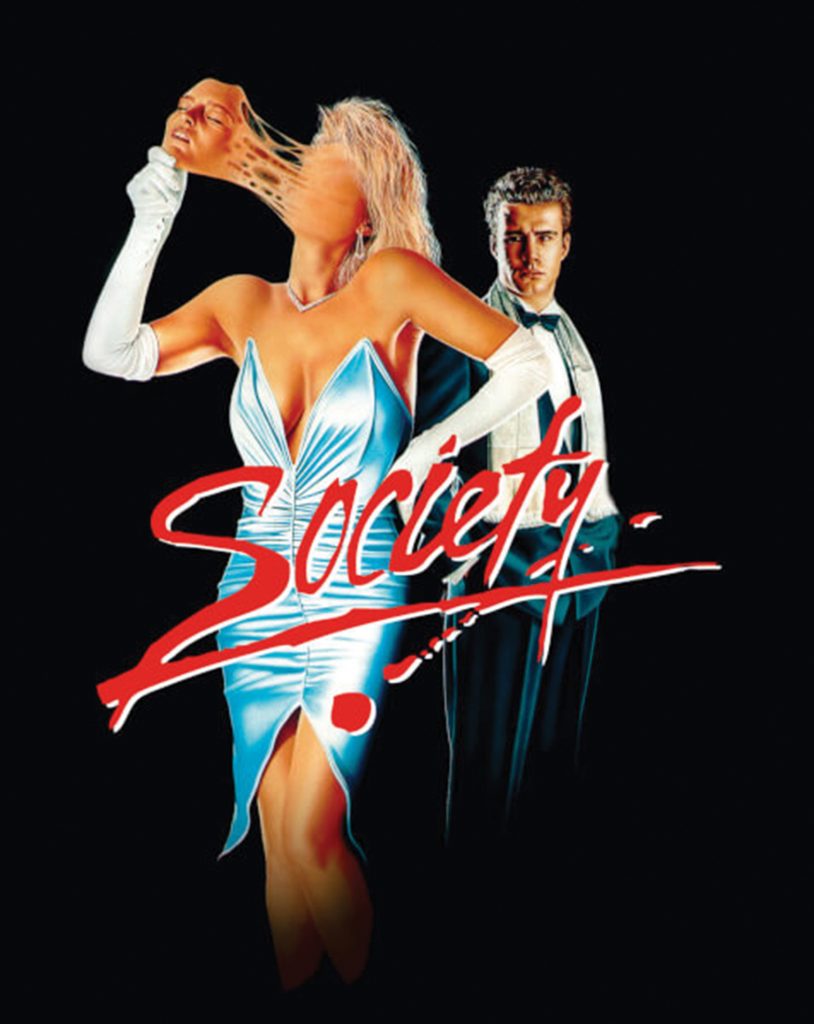 IT IS A MATTER OF GOOD BREEDING. REALLY.

After producing Stuart Gordon’s hit Re-Animator, Brian Yuzna (Bride of Re-Animator, Return of the Living Dead III) turned his hand to directing with 1989’s Society, and gave birth to one of the ickiest, most original body horror shockers of all time.

Packing stomach-churning grue and thought-provoking social commentary in equal measure, Society is a biting horror satire which culminates in one of the most gag-inducing “climaxes”‘ in all of horror history.