Favorite Movie Scene of the Day #6! 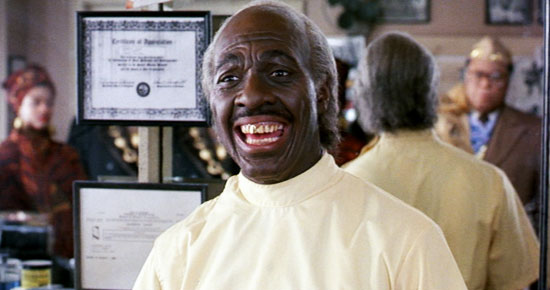 I really don’t think it gets any funnier than this right here. The year was 1988 and director John Landis and actors Eddie Murphy and Arsenio Hall were on top of the world. It was good times for sure. These three made a little comedy movie called Coming to America, which is still to this day one of the funniest movies ever made. This had super-star Eddie Murphy, who was then mostly known for his work on SNL and his vulgar and hilarious stand up routine, acting in a role where he was the most gentle, warm, and nicest guys around.

He was a fish out of water in being an African Prince who just turned 21, who travels to Queens New York City to find his – well Queen. He didn’t know any of the customs of America, nor did his best friend, played by Arsenio Hall. What transpired on screen is some of the best comedy we’ve ever seen in cinema. With Landis’ filmmaking techniques and brilliant story-telling, and Murphy and Hall’s brilliant comedic timing and improv, it’s a shame that nobody got back together again to make a sequel to this. There are so many great scenes in this movie.

Perhaps one that stands out though is Eddie Murphy and Arsenio Hall playing the barber shop characters. After Michael Jackson’s Thriller and Landis’ American Werewolf in London, we all knew the name Rick Baker, who was the amazing makeup and visual effects master on those projects. After Eddie saw Thriller and the werewolf film, I’m sure he wanted to be a part of immersing himself into makeup and costume to play his iconic characters.

From this movie, Murphy went on to make a ton of family-friendly films with the help of Rick Baker, helping him to transform into the Klumps and various other acting roles through the years. It’s with Coming to America though, is where it all started.

In this scene, we meet four old guys who work in a barber shop below where Murphy and Hall’s characters live in the film. They all seem to bitch at each other and talk about boxing all the time. One of the patrons, who seems to live inside the barber shop is an old white Jewish guy, who is also played by Murphy. Their banter between one another, even with customers in the store is simply magic. I wonder just how many times it took to improv these scenes without any laughter.

It’s the funniest thing I’ve probably ever seen. The chemistry between Murphy and Hall is outstanding and I only wish they would make more movies together, because when the riff off one another, it’s comedic gold. I mean, Eddie just says Joe Lewis’ age is 137. Priceless.

Just take in this scene and try not to laugh.

Saul: What about Rocky Marciano?

Clarence: Joe Louis was seventy-five years old when he fought!

Morris: I don’t know how old he was, but he got his ass whooped.