The comedy favorite team of Simon Pegg and Nick Frost have co-starred in some amazing flicks together, the Three Flavours Cornetto trilogy, consisting of ‘Shaun of the Dead‘, ‘Hot Fuzz‘, and ‘The World’s End‘. They’re not done with the film-making and Thank God for it!! The pair have their own film and TV production company titled Stolen Picture. The first film to break in the banner is ‘Slaughterhouse Rulez‘. 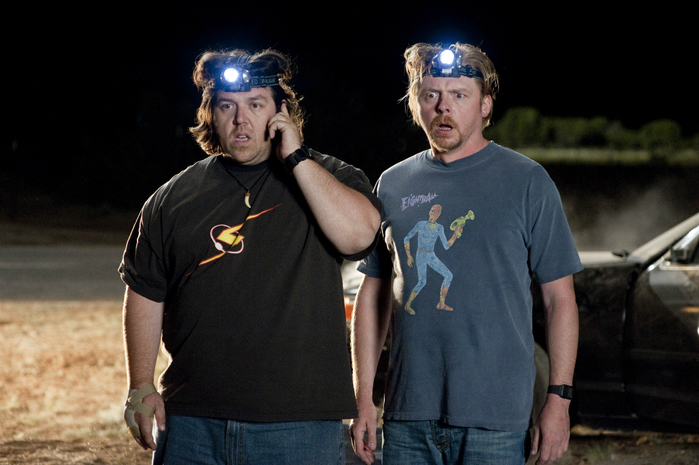 The comedy-horror has got the backing of Sony Pictures and Catalyst Global Media. Crispian Mills is directing from a script he co-wrote with Henry Fitzherbert. Mills wrote and directed Pegg’s ‘A Fantastic Fear of Everything‘. Fantastic Fear may have had it’s slow points, but was absolutely hilarious and everything I wanted it to be. I can’t wait to see what Mills and Pegg can do with the flavorful zing of Frost mixed in.

From Deadline, “Slaughterhouse Rulez is set in an elite boarding school – Welcome to Slaughterhouse – where boys and girls are groomed for power and greatness and they’re about to meet their match. The story’s hero, Don Wallace, is a wide-eyed new boy from a modest background forced to navigate a baffling new world of arcane rules and rituals, presided by sadistic sixth formers. Matters of status are aggressively enforced and conversation with school goddess Clemsie, are strictly forbidden.

But this ancient and ordered world is about to be shaken to its foundations – literally – and when a controversial frack site on prize school woodland causes seismic tremors, a mysterious sinkhole and an unspeakable horror is unleashed. Soon a new pecking order will be established as pupils, teachers and the school matron become locked in a bloody battle for survival.”

I know what I’ll be saying opening day, “One please”. Until then, check out ‘A Fantastic Fear of Everything“.