We live in a time where all of our favorite films and television programs from decades ago are getting sequels, rebooted, and remade. The ALIEN franchise that we have all come to love over the years has had its share of revamps. Luckily, the original filmmaker Ridley Scott, who made ALIEN back in 1979 came back a few years ago and made an early sequel to the franchise with PROMETHEUS. Clearly, Scott isn’t done telling stories in this horrifying universe, and we now have a sequel with ALIEN: COVENANT, which breathes new life into this stale franchise and promises more sequels and even more scares. What we loved about the original ALIEN is certainly present in a lot of COVENANT.

Suspenseful moments, face-huggers, aliens, gore, and good characters all mix well here as Scott explains some of the events in PROMETHEUS that are still relevant now with the help of writer John Logan (GLADIATOR, SKYFALL), as we get a double dose of Michael Fassbender this time around as the previous droid David and now newly improved droid Walter as he helps the crew of the Covenant, which is a ship headed to a planet to colonize with a ton of frozen embryos and humans in hyper sleep to help settle in on the new planet. 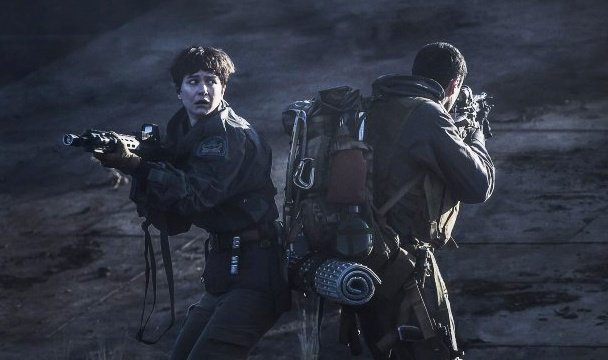 When they get a signal from a nearby planet that looks to be habitable, the crew heads there, only to find David and some nasty aliens. The suspense is slow-building, but will have you on the edge of your seat for sure in certain moments, and will bring you back to the 1980’s in its feel and tone of horror. The characters all have potential, but aren’t given enough time to really get meat of them. Danny McBride as Tennessee, the pilot of the Covenant is the comic relief, but also holds his own in suspenseful situations. Billy Crudup as the first mate of the ship brings a good balance of someone you love and hate when he’s on screen. Katherine Waterson plays Daniels, a terraforming expert and bares a huge resemblance to Sigourney Weaver’s character from the original ALIEN films. However, just like her performance in FANTASTIC BEASTS, she’s stale and uninteresting in every scene.

The real spotlight is on Fassbender here, playing both droids, who you’re never really sure of. Both of his accents are spot on and his mannerisms are eerily calculated. Then again, Fassbender is always amazing. The explanations of the aliens themselves and seeing them evolve is quite spectacular with some truly terrifying scenes with some great blood and guts scenes that should satisfy the horror hounds. There are a few slow moments throughout, but it’s never filler for the next scene. It’s just part of this new slow pacing that drives up suspense. ALIEN: COVENANT is the step in the right direction we need with these films. Now if we can just get back Sigourney Weaver as Ripley, then we can have our freak out.