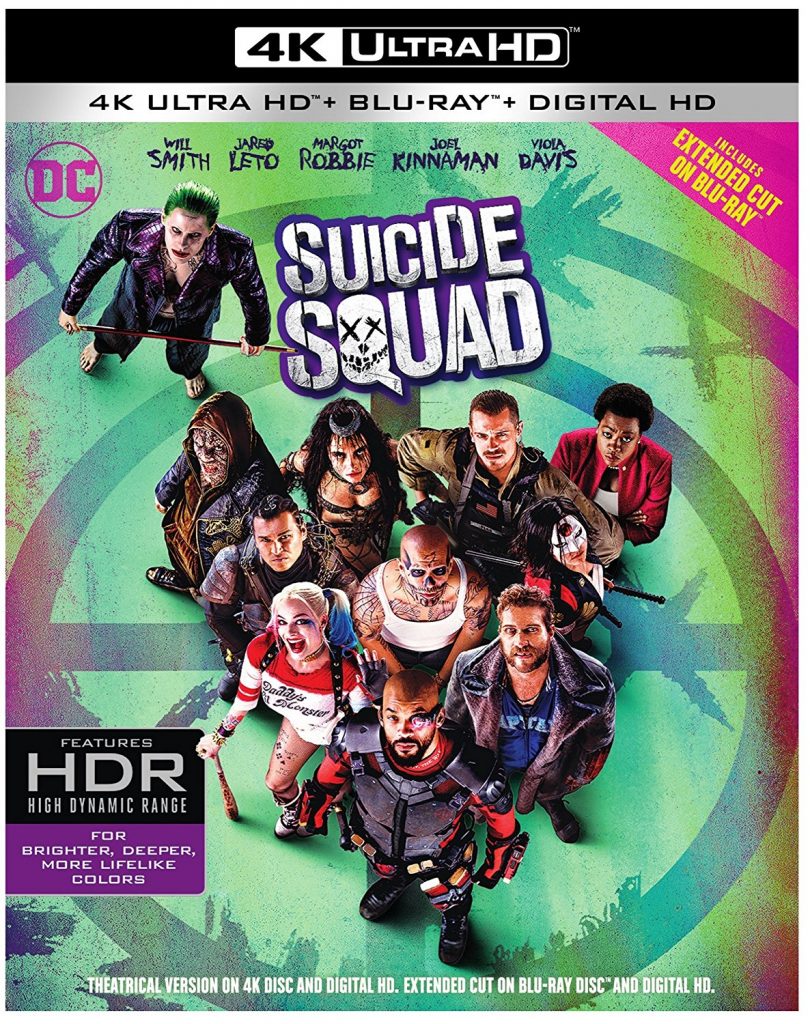 There seems to be a good movie hidden somewhere in ‘Suicide Squad‘, but the film itself makes it nearly impossible for you to find where those good moments are. The film is its own worst enemy, because it promises something new and fresh in the first dozen or so minutes, but then nose dives into the mountain from there on out. This is certainly writer/director David Ayer’s most ambitious project and I can’t tell if it’s his mistake or the collection of DC/Warner Bros. executives who forced the notes on him to make this film not succeed, because again, the first part of the movie gathers your hopes up for something fun. Ayer wrote ‘Training Day‘ and ‘U-571‘, then transitioned into directing with ‘End of Watch‘ and ‘Fury‘, which were both new and fresh takes on tired genres. I was hoping that Ayer could breathe new life and put the DC Comic movie franchise on the right track, but alas, that is not the case.

That being said, this is a tiny fraction better than ‘Batman v Superman: Dawn of Justice‘, but again, that’s not saying much either. I still think one of the worst films in the comic book realm was the recent ‘Fantastic Four’ remake. That movie on a whole was just terrible on every possible level. It was the worst movie of the year for me. Nothing worked on that film. Here with ‘Suicide Squad‘, Ayer and Warner Bros. had all of the perfect parts to make a great movie, but somewhere in post-production, everything was lost, which makes me just more disappointed in ‘Suicide Squad‘, because they had a ton going for it, but missed the mark, seemingly on purpose. This concept is nothing new with having a team of “bad guys” unite to fight something worse for the greater good. Akira Kurosawa’s ‘Seven Samurai‘ paved the way for this genre, which in turn gave birth to this sub genre that spawned ‘The Magnificent Seven‘ all the way to Marvel’s ‘Guardians of the Galaxy‘.

Those films worked on every level of entertainment and filmmaking, where ‘Suicide Squad‘ falls short on almost every account, whether it be the horrendous and cringe worthy dialogue throughout the whole movie, the unbelievably awful plot and relationships that are just flat out silly, to the vast amount of characters who never get any screen time other than a couple of shots of action. It was all a disappointment. Since most people won’t know who or what the ‘Suicide Squad’ is  other than big comic book fans with the exception of The Joker (Jared Leto) and maybe Harley Quinn (Margot Robbie) , the first part of the film introduces us to all of the characters in a roll call style montage, each with their own flashback of their skill-set, arrest, and pop song. Sometimes, we are introduced to the characters twice, which didn’t make sense.

Like the trailer, Ayer filmed these biographical sequences with the use of those neon color schemes and the right amount of fun and explosiveness that promised something different that took us out of the dreary, dark, and moody DC universe, but as soon as this segment was over, it was back to dark and brooding in a dilapidated city of no color or even citizens walking around. The characters themselves are all great and have their individuality, but it never goes as far as that really. Sure Deadshot (Will Smith) shows that not only is he the world’s deadliest assassin and has a chip on his shoulder in the form of Batman (Ben Affleck), but that he is willing to do anything for his 11 year old daughter, including to show her that he is not a “bad guy”. That sounds good on paper, but the execution and dialogue is covered in smelly cheese throughout and never really investigates any of this.

Jay Hernandez’s character El Diablo probably has one of the better backstories, as his power is basically that of the Human Torch, but has now doesn’t use his fire power anymore, due to an accident with his family long ago. Again, this wasn’t explored as well as it should have been, and instead, we got awful dialogue and a terrible flashback that ended in that dreaded camera shot panning upwards with the character looking up at the camera, screaming, “NOOOOOOOOOOO”. Another big problem with the film was the villain, who resembled a terrible looking Zuul from ‘Ghostbusters’. The problem here is that the evil or “villain” part is never explained as to why or what it is, but is rather just thrown in there with the tired use of the sky opening up and everybody and everything being sucked up into the sky. This villain is known as The Enchantress and is basically a witch with powers who in turn has a romantic relationship with the military leader named Flag (Joel Kinnaman). This plot line is so laughable  and executed so poorly, that I immediately was bored any rolling my eyes in the first part of the film.

And of course there is Jared Leto’s Joker, who is only inserted here in very small doses. He’s not a major part of the film, and only serves to enhance Harley Quinn, who is easily the BEST part of the movie. Leto is fairly unpredictable and wild as the Joker should be, but he is never scary nor chaotic as he is known to be. In fact, he is mostly a weird nightclub owner in the film, but his sadistic relationship with Harley Quinn is what drives Robbie’s character, which shows us a human side to her from time to time, which brings us to Margot Robbie herself.

Again, she just owns this character from top to bottom. Her inner chaos and craziness is as good as her softer human side and you can tell she just wants to be accepted in some form or fashion. I’m glad she’s getting her own film. Killer Croc’s makeup is fantastic, but is only given some throwaway jokes here and there. In fact, the film had some reshoots to make the film funnier due to the backlash on ‘Batman v Superman: Dawn of Justice‘, but it was done in such a lazy manner that you can easily tell where they added the worst and cringe worthy dialogue in to try and make it “funny”, which it wasn’t. Other characters show up out of nowhere and never have anything to do but have some special skill that is never fully utilized or sought out. ‘Suicide Squad‘ promises something good and different in its opening minutes, but then falls flat on its face and never recovers. 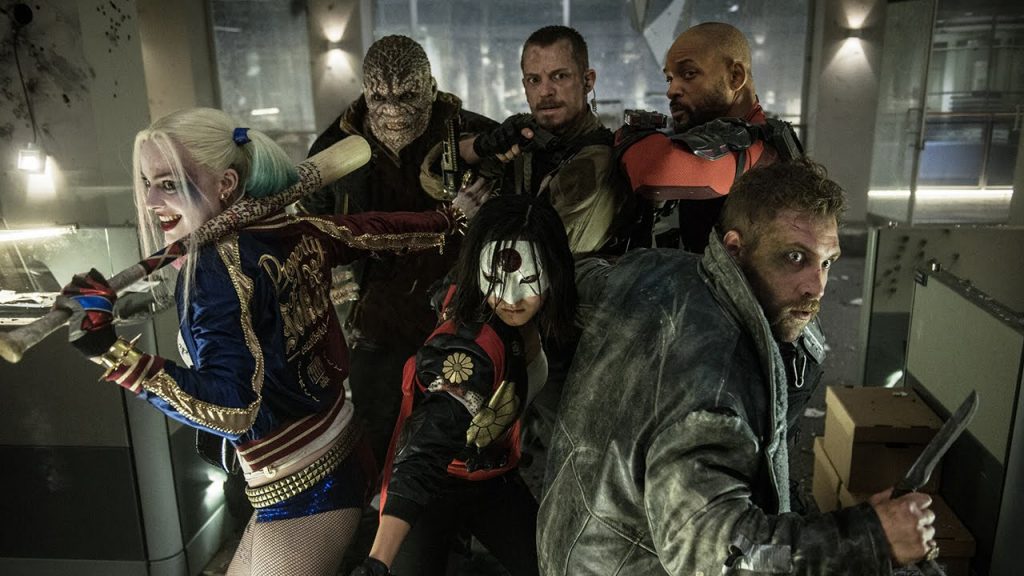 Warner Bros. goes on a suicide mission with the 4K UHD release of ‘Suicide Squad‘, which has a HEVC H.265 encode in HDR10 with a 2.40:1 aspect ratio. This release has a digital download code as well as the standard Blu-ray version, in addition to the 4K disc. There is no 3D option here. This 4K version has better detail that is sharper and more vivid than the standard Blu-ray version. The HDR is what really shines here in this mostly darkly lit film. What truly stands out are those bright neon graphics and scenes with The Joker and Harley Quinn in their colorful outfits and makeup.

Closeups show every tattoo perfectly on El Diablo’s skin and every piece of makeup on every other villain. Every scale and spike on Killer-Croc’s body is perfectly distinguishable as well. When different lighting scenarios hit all of these tiny details, the colors change too with the lighting, and every shade and piece of detail shows up nicely.  Heavier CGI effects look good here too and never really go soft. The daylight sequences certainly show better detail and color, but the night time sequences are bright and boast some great color as well. Black levels are very deep and inky and the skin tones are natural. There is an uptick in detail and in the color for sure with this 4K presentation and makes this film visually stunning, even if the story isn’t.

The Audio: This UHD release of ‘Suicide Squad‘ has an English: Dolby Atmos track, where I used a 7.1.2 Atmos speaker setup with the normal 7.1 surround and two overhead speakers, plus a subwoofer powering this comedy action soundscape. The standard Blu-ray version has a Dolby Atmos track as well. This is a great audio presentation, but not the best I’ve heard, due to the stylistic choices. This could have been an amazing audio mix with bullets flying overhead, helicopters zooming in the sky, and tons of bodies flying, jumping, and running all over the place. Sure, all of that happens, but the songs that David Ayer picked mostly drowns out all of the sound effects of the heavier action scenes.

I get that Ayer wanted these songs in the film for a purpose, but it took away from all of the cool sound effects for what they could have been. There is some great directionality here and the dialogue is always clear and easy to follow, and free of any pops, cracks, hiss, and high shrills. There is quite a bit of bass here too, which never crosses into rocky territory, leaving this audio presentation with good marks, but I wish there was a bigger sound effect presence that was not drowned out by classic rock and pop songs.

Task Force X: One Team, One Mission (HD, 23 Mins.) – The filmmaker, cast and DC Comics writers discuss the origin of the Suicide Squad in comic book form and how they transitioned to the big screen.

Chasing the Real (HD, 10 Mins.) – The crew of the film talk about how the film used realistic elements to transcribe the superhero aspect and fantasy of the comic books.

Joker and Harley: ‘It’ Couple of the Underworld (HD, 15 Mins.) – Jared Leto, Margot Robbie, and David Ayer talk about their versions and characters based off the comic book icons.

Squad Strength and Skills (HD, 9 Mins.) – The stunts are given a look here, which are quite impressive and worth watching.

Armed to the Teeth (HD, 12 Mins.) – All of the weapons, guns, and props are discussed here with how they were made and them in use.

This is Gonna Get Loud: The Epic Battles of ‘Suicide Squad’ (HD, 11 Mins.) – This extra focuses on staging, rehearsing, and getting all of the fight scenes just right for film.

The Squad Declassified (HD, 5 Mins.) – All of the characters except Diablo get a short synopsis that talks about the traits and weapons. 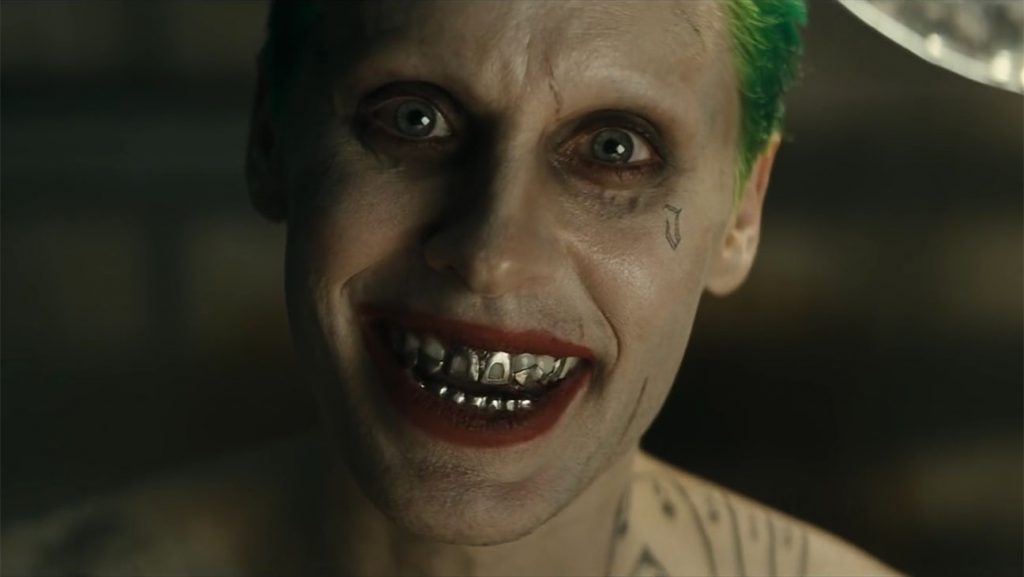 This 4K UHD version of ‘Suicide Squad‘ looks and sounds great, despite some minor issues. The film still isn’t great, even with the extended cut. If you’re a fan of the film, I’m sure you’ll love this release, because there are some decent extras here, but if you didn’t enjoy the film, then you won’t be missing anything special.