Criterion has announced their September titles, which are all listed below. You can see all the tech-specs and bonus features with each title. This is one hell of a month for Criterion, as all titles look insanely good. I can’t wait to watch all of these. We will update when pre-order links are available.

‘NIGHT TRAIN TO MUNICH‘ – Blu-Ray Edition
Night Train to Munich, from writers Frank Launder and Sidney Gilliat (Hitchcock’s The Lady Vanishes) and director Carol Reed (The Fallen Idol, The Third Man), is a twisting, turning, cloak-and-dagger delight. Paced like an out-of-control locomotive, this gripping, occasionally comic confection takes viewers on a World War II-era journey from Prague to England to the Swiss Alps, as Nazis pursue a Czech scientist and his daughter (Margaret Lockwood, of The Lady Vanishes), who are being aided by a debonair British undercover agent, played by Rex Harrison (Major Barbara, My Fair Lady). This captivating adventure-which also features Casablanca’s Paul Henreid-mixes comedy, romance, and thrills with enough skill and cleverness to give the Master of Suspense himself pause.

* Restored high-definition digital transfer, with uncompressed monaural soundtrack
* Conversation from 2010 between film scholars Peter Evans and Bruce Babington about director Carol Reed, screenwriters Frank Launder and Sidney Gilliat, and the social and political climate in which Night Train to Munich was made
* PLUS: An essay by film critic Philip Kemp 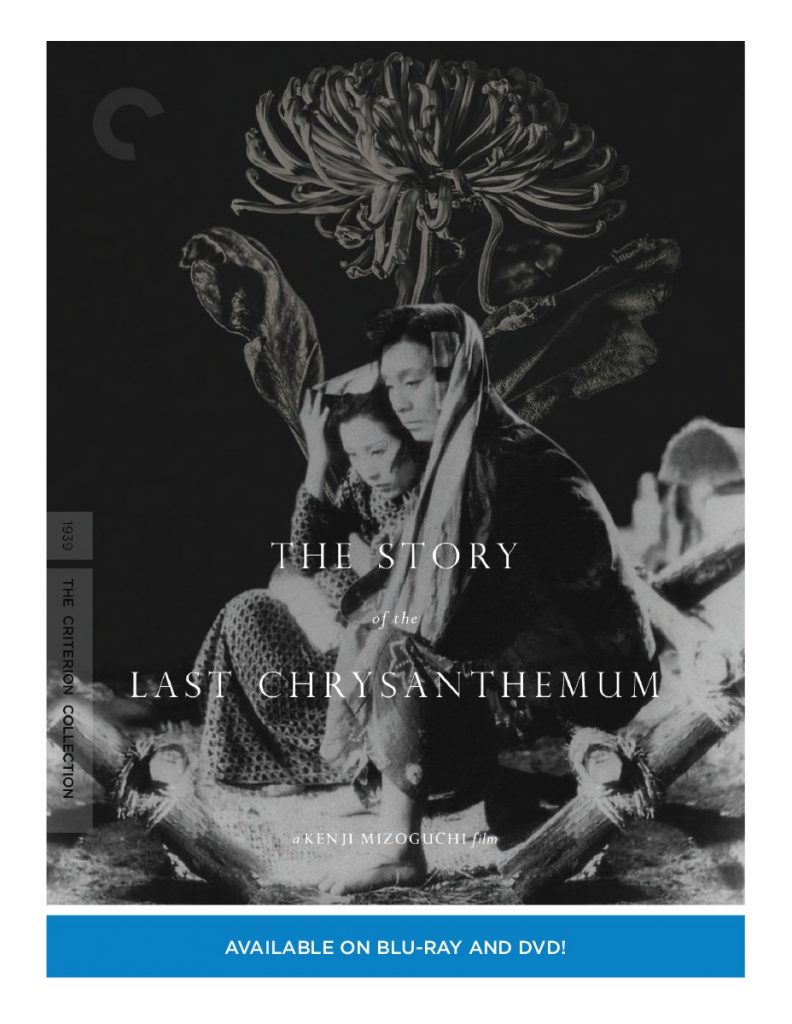 ‘THE STORY OF THE LAST CHRYSANTHEMUM‘ – Blu-Ray & DVD Editions
This heartrending masterpiece by Kenji Mizoguchi (Ugetsu) about the give-and-take between life and art marked the director’s first use of the hypnotic long takes and eloquent camera movements that would come to define his films. The adopted son of legendary kabuki actor Kikunosuke (Shotaro Hanayagi), who is striving to achieve stardom by mastering female roles, turns to his infant brother’s wet nurse (Kakuko Mori) for support and affection-and she soon gives up everything for her beloved’s creative glory. Featuring fascinating glimpses behind the scenes of kabuki theater in the late nineteenth century, The Story of the Last Chrysanthemum is a critique of the oppression of women and the sacrifices required of them, and the pinnacle of Mizoguchi’s early career. 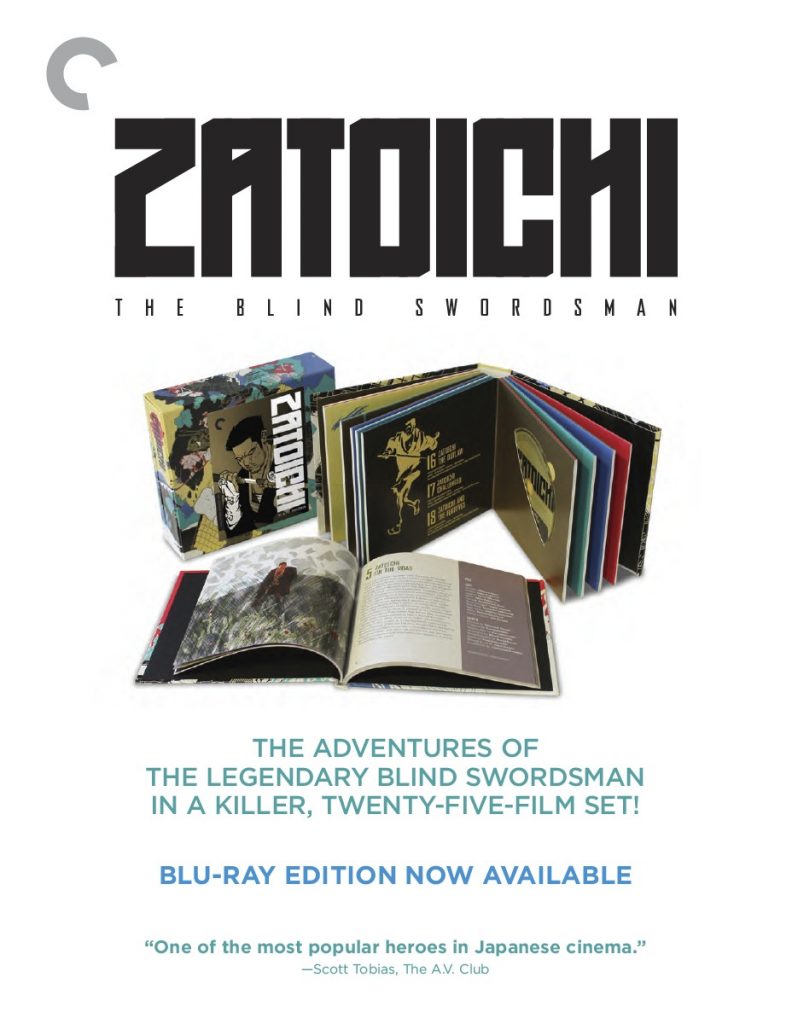 ‘ZATOICHI: THE BLIND SWORDSMAN‘ – Blu-Ray Edition
The colossally popular Zatoichi films make up the longest-running action series in Japanese history and created one of the screen’s great heroes: an itinerant blind masseur who also happens to be a lightning-fast swordsman. As this iconic figure, the charismatic and earthy Shintaro Katsu became an instant superstar, lending a larger-than-life presence to the thrilling adventures of a man who lives staunchly by a code of honor and delivers justice in every town and village he enters. The films that feature him are variously pulse-pounding, hilarious, stirring, and completely off-the-wall. This deluxe set features the string of twenty-five Zatoichi films made between 1962 and 1973.

BLU-RAY SPECIAL EDITION FEATURES
* Digital restorations of all twenty-five films, with uncompressed monaural soundtracks
* The Blind Swordsman, a 1978 documentary about Zatoichi portrayer and filmmaker Shintaro Katsu, along with a 2013 interview with its director, John Nathan
* Interview from 2013 with Asian-film critic Tony Rayns
* Trailers
* PLUS: A book featuring an essay by critic Geoffrey O’Brien; synopses of the films by critic, novelist, and musician Chris D.; “The Tale of Zatoichi,” the original short story by Kan Shimozawa; and twenty-five illustrations inspired by the films, by twenty-five different artists 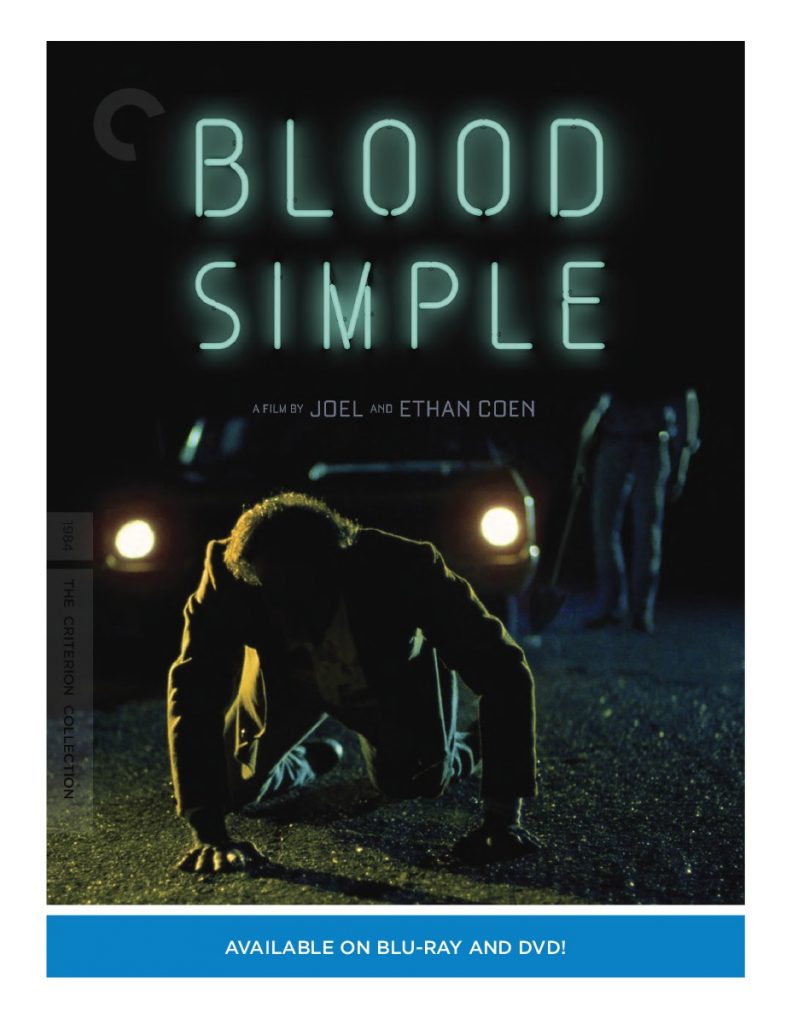 ‘BLOOD SIMPLE‘ – Blu-Ray and DVD Editions
The career-long darkly comic road trip through misfit America of Joel and Ethan Coen (Inside Llewyn Davis) began with this razor-sharp, hard-boiled neonoir set somewhere in Texas, where a sleazy bar owner sets off a torrent of violence with one murderous thought. Actor M. Emmet Walsh (Blade Runner) looms over the proceedings as the slippery private eye with a yellow suit, a cowboy hat and no moral compass, and Frances McDormand (Fargo) gives a cunning debut performance that set her on the road to stardom. The tight scripting and inventive camera work that have marked the Coens’ work for decades is all here, as cinematographer Barry Sonnenfeld (Raising Arizona) trades black-and-white chiaroscuro for neon signs and jukebox colors that combine with a haunting score by Carter Burwell (Barton Fink) to lurid and thrilling effect. Blending elements from pulp fiction and low-budget horror flicks, Blood Simple reinvented the film noir for a new generation, and marked the arrival of a filmmaking ensemble that would help to transform the American independent cinema scene in the 1980s. 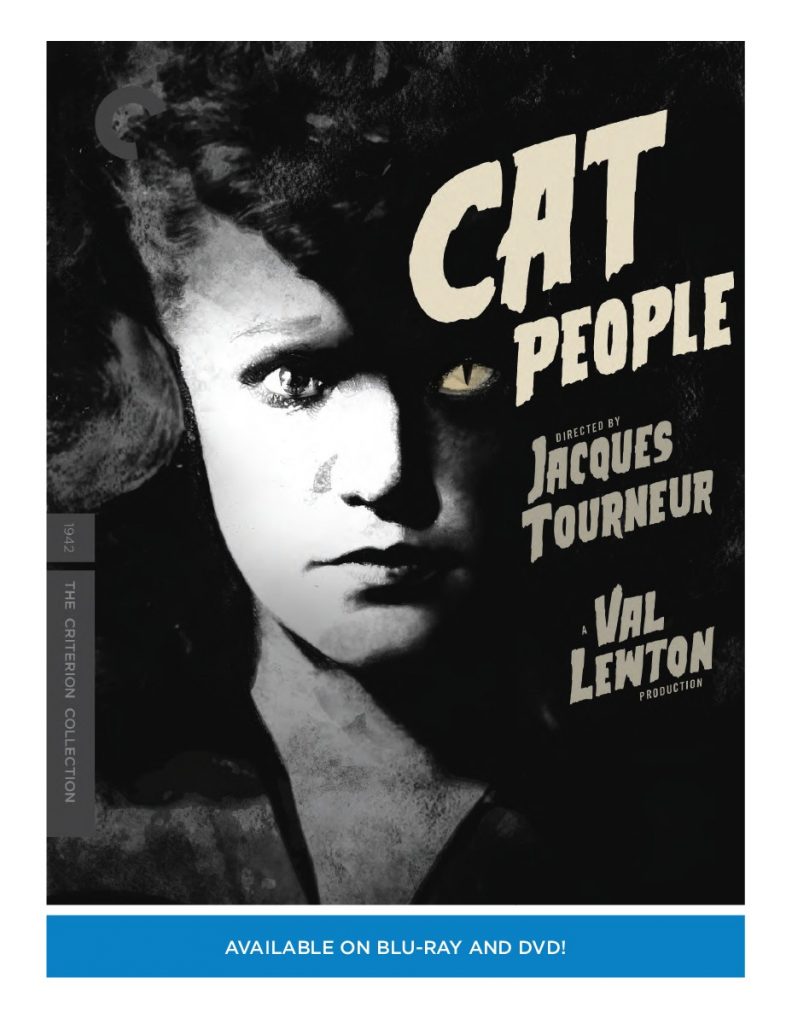 ‘CAT PEOPLE‘ – Blu-Ray and DVD Editions
The first of the horror films producer Val Lewton (The Body Snatcher, I Walked with a Zombie) made for RKO Pictures redefined the genre by leaving its most frightening terrors to its audience’s imagination. Simone Simon (La bête humaine) stars as a Serbian émigré in Manhattan who believes that, because of an ancient curse, any physical intimacy with the man she loves (Kent Smith) will turn her into a feline predator. Lewton, a consummate producer-auteur who oversaw every aspect of his projects, found an ideal director in Jacques Tourneur (Out of the Past), a chiaroscuro stylist adept at keeping viewers off-kilter with startling compositions and psychological innuendo. Together, they eschewed the canned effects of earlier monster movies in favor of shocking with subtle shadows and creative audio cues. One of the studio’s most successful movies of the 1940s, Cat People raised the creature feature to new heights of sophistication and mystery.

SPECIAL EDITION FEATURES
* New, restored 2K digital transfer, with uncompressed monaural soundtrack on the Blu-ray
* Audio commentary from 2005 featuring film historian Gregory Mank, with excerpts from an audio interview with actor Simone Simon
* Val Lewton: The Man in the Shadows, a 2008 feature-length documentary that explores the life and career of the legendary Hollywood producer
* Interview with director Jacques Tourneur from 1977
* New interview with cinematographer John Bailey about the look of the film
* Trailer
* PLUS: An essay by critic Geoffrey O’Brien 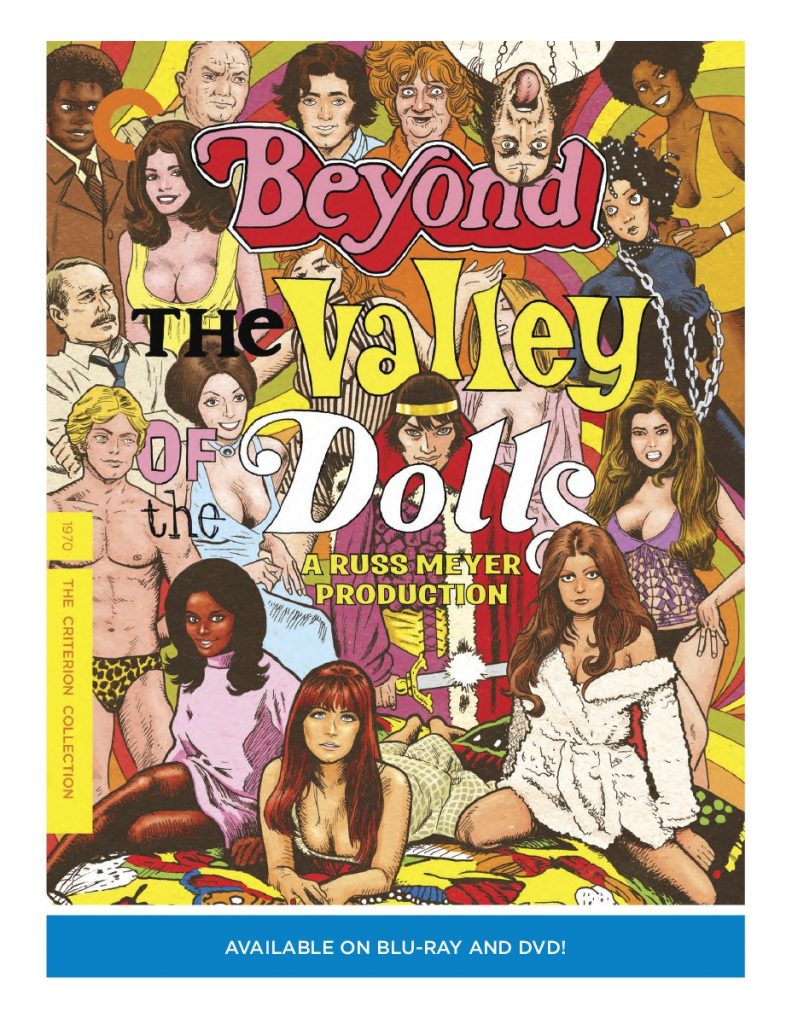 ‘BEYOND THE VALLEY OF THE DOLLS‘
In 1970, 20th Century-Fox, impressed by the visual zing “King of the Nudies” Russ Meyer (Faster, Pussycat! Kill! Kill!) brought to bargain-basement exploitation fare, handed the director a studio budget and the title to one of its biggest hits, Valley of the Dolls. With a satirical screenplay by Roger Ebert, Beyond the Valley of the Dolls follows three young female rockers going Hollywood in hell-bent sixties style under the spell of a flamboyant producer-whose decadent bashes showcase Meyer’s trademark libidinal exuberance. Transgressive and outrageous, this big-studio version of a debaucherous midnight movie is an addictively entertaining romp from
one of the movies’ great outsider artists.

SPECIAL EDITION FEATURES
* High-definition digital restoration, with uncompressed monaural soundtrack on the Blu-ray
* Audio commentary from 2003 featuring screenwriter Roger Ebert
* Audio commentary from 2006 featuring actors Dolly Read, Cynthia Myers, Harrison Page, John La Zar, and Erica Gavin
* New interview with filmmaker John Waters
* Archival interviews with writer, director, and producer Russ Meyer
* Q&A about the film from 1992 featuring Meyer, Ebert, La Zar, Read, and actors David Gurian, Charles Napier, Michael Blodgett, and Edy Williams
* Above, Beneath, and Beyond the Valley; Look On Up at the Bottom; The Best of Beyond; Sex, Drugs, Music and Murder; and Casey & Roxanne, five documentaries from 2006 about the making of the film, featuring the cast and crew
* Trailers and TV spots
* More!
* PLUS: An essay by film critic Glenn Kenny 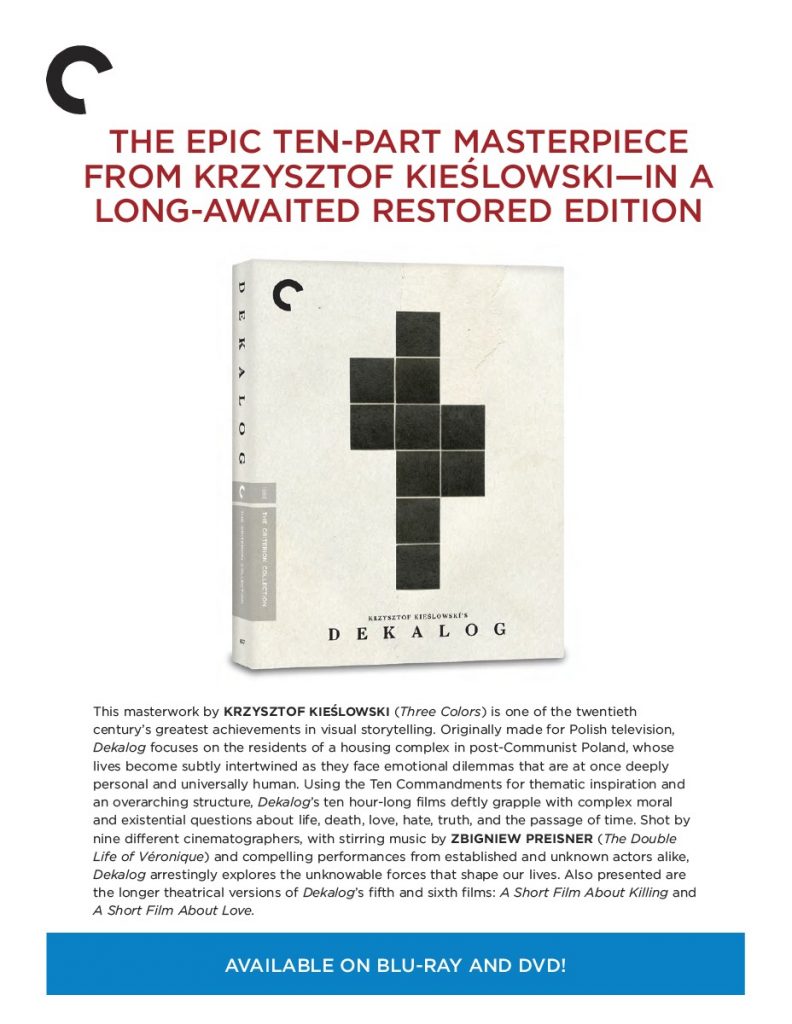 ‘DEKALOG‘ – Blu-Ray and DVD Editions
This masterwork by Krzysztof Kieślowski (Three Colors) is one of the twentieth century’s greatest achievements in visual storytelling. Originally made for Polish television, Dekalog focuses on the residents of a housing complex in post-Communist Poland, whose lives become subtly intertwined as they face emotional dilemmas that are at once deeply personal and universally human. Using the Ten Commandments for thematic inspiration and an overarching structure, Dekalog’s ten hour-long films deftly grapple with complex moral and existential questions concerning life, death, love, hate, truth, and the passage of time. Shot by nine different cinematographers, with stirring music by Zbigniew Preisner (The Double Life of Véronique) and compelling performances from established and unknown actors alike, Dekalog arrestingly explores the unknowable forces that shape our lives. Also presented are the longer theatrical versions of Dekalog’s fifth and sixth films: A Short Film About Killing and A Short Film About Love.

SPECIAL EDITION COLLECTOR’S SET FEATURES
* New 4K digital restoration, with uncompressed monaural soundtracks on the Blu-rays
* New high-definition digital restorations of A Short Film About Killing and A Short Film About Love, with uncompressed monaural soundtracks on the Blu-rays
* Selection of archival interviews with director Krzysztof Kieślowski, culled from footage from the 1987 production of Dekalog: Two, excerpts from the 1995 documentary A Short Film About “Dekalog,” and a 1990 audio recording from the National Film Theatre in London
* New program on the visual rhyming of Dekalog by film studies professor Annette Insdorf
* New and archival interviews with Dekalog cast and crew, including cowriter Krzysztof Piesiewicz, thirteen actors, three cinematographers, editor Ewa Smal, and Kieślowski’s confidante Hanna Krall
* Trailers
* PLUS: A booklet featuring an essay and film analyses by film scholar Paul Coates and excerpted reprints from Kieślowski on Kieślowski 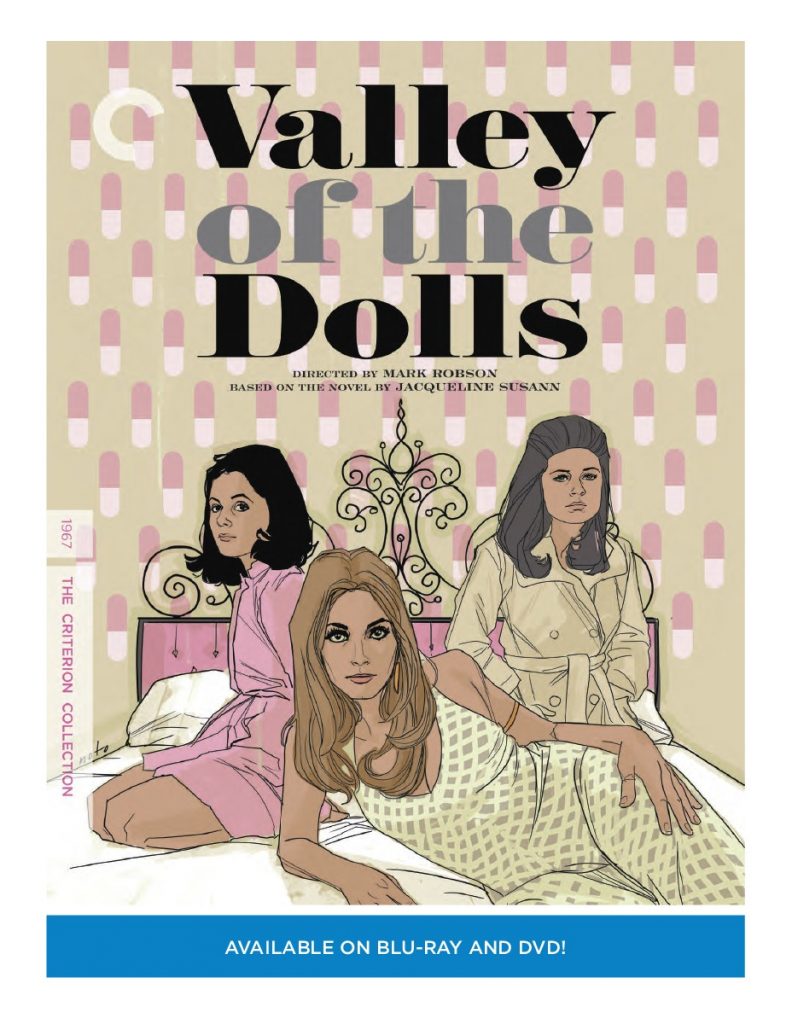 ‘VALLEY OF THE DOLLS‘ – Blu-Ray & DVD Editions
Cutthroat careerism, wild sex, and fierce female protagonists are all on offer in this adaptation of Jacqueline Susann’s sensational and wildly popular novel. Patty Duke (The Miracle Worker), Barbara Parkins (Peyton Place), and Sharon Tate star as three friends attempting to navigate the glamorous, pressurized world of big-time show business-the “valley” is not a place but a narcotized state of mind, and the “dolls” are the pills that rouse them in the morning and knock them out at night. Blending old-fashioned gloss with Madison Avenue grooviness, this slick look by director Mark Robson (Peyton Place) at the early days of sexual liberation and an entertainment industry coming apart was a giant box-office hit and has become an unforgettably campy time capsule of the 1960s.