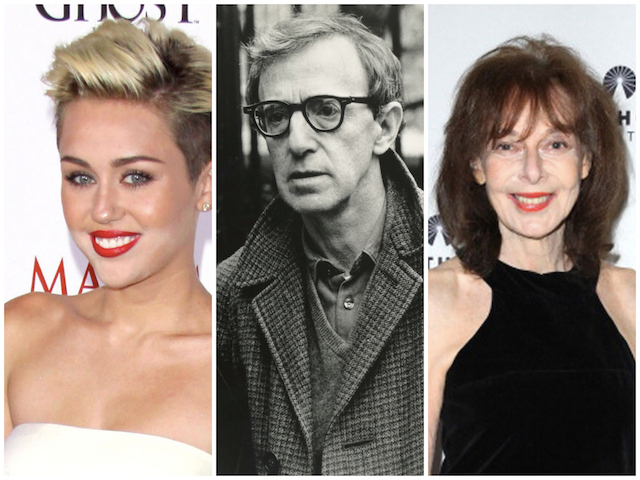 Woody Allen is an artist that garners reactions on both ends of the spectrum when it comes to enjoyment of his projects, you either love him or hate him. It seems, he’s not always happy with his decisions, either, at the last Cannes, he said the deal he made to create a TV series for Amazon was a catastrophic mistake and he regretted signing on to make an original series. His plan was to create a movie, but in six parts, that didn’t quite work out as planned. He struggled through the process and will write, direct and star in the finished product along with two unlikely co-stars.

The time period for six half hour episodes is the 1960’s and those co-stars come in the form of Elaine May and Miley Cyrus. Not sure how much twerking went on in the 60’s, but it seems she’s the right fit for Allen, regardless of the dance style.

May, who is 83, starred in Allen’s film ‘Small Time Crooks‘ from 2000 and that is also her last screen appearance. Outside of acting, she’s made a name for herself as the writer for some great movies like ‘The Birdcage‘ and ‘Primary Colors‘ and as the director of ‘The Heartbreak Kid‘ and ‘Ishtar‘. So, she makes sense to be cast, but Miley? This one is throwing me. The 23 year old Cyrus‘ largest acting role is from ‘Hannah Montana‘, along with flicks like ‘The Last Song‘ and ‘LOL‘. I’m not sure which performance sold Allen, but maybe he needs someone to ride a wrecking ball?

Allen has until the end of 2016 to produce the six episodes, and production begins in March.