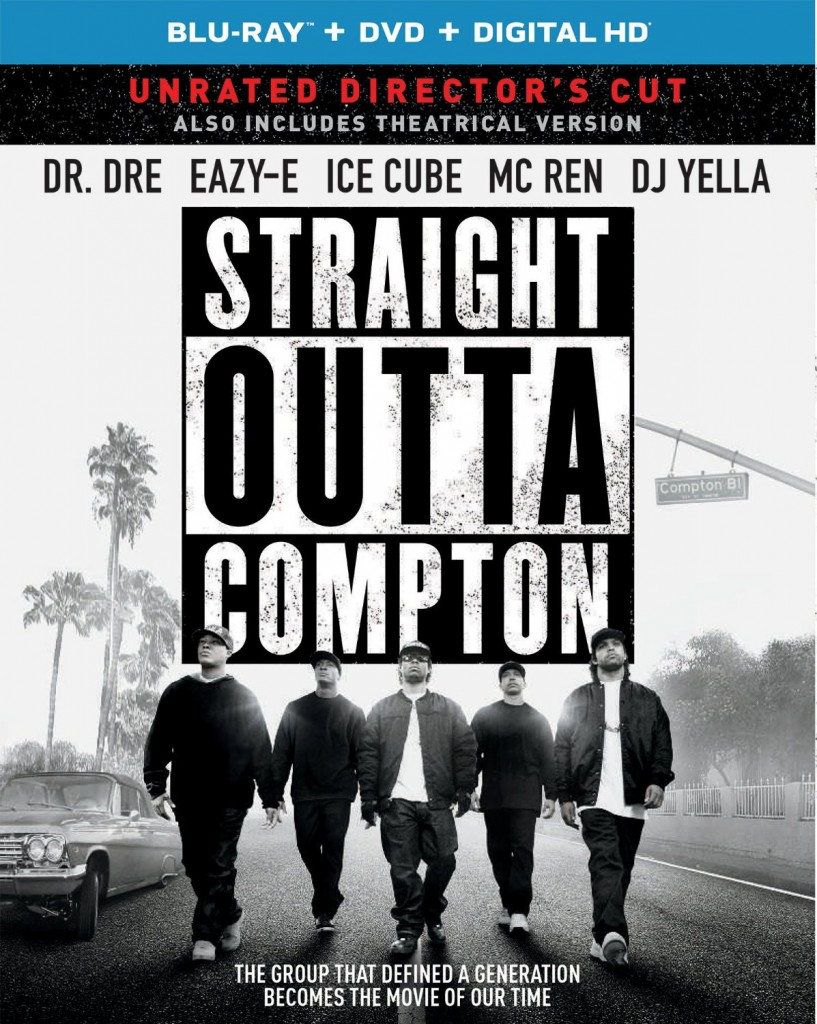 Music biopics are one of my favorite genres of film. I love seeing a musical artist or band portrayed on screen and their rise to fame, complete with how they came up with their platinum hits, warts and all. As of lately, we haven’t seen a ton of these biopics with the exception of the excellent ‘Love & Mercy‘ about Beach Boys member Brian Wilson. Most of the biopics usually focus on one person or a band and go up until they hit it big, but that’s not the case with ‘Straight Outta Compton‘, which is more of a bio-epic than a biopic. Instead of following one person, the film follows three main characters with a treasure trove of other superstar artists.

The three in question are Andre Young, O’Shea Jackson, and Eric Wright or Dr. Dre, Ice Cube, and Eazy-E respectively as they form one of the world’s greatest rap groups in the late 80s – ‘N.W.A.‘. Director F. Gary Gray (‘Friday‘), has perfectly strewn together several characters and told their stories through several years, highlighting the good times as well as the bad of these three amazing artists. If you grew up like I did in the 80’s and 90’s, ‘N.W.A.‘ was a huge deal. Not only was their music and lyrics incredible and powerful, but they spoke the truth about was going down in their violent neighborhoods as well as how the racist and trigger happy L.A.P.D. would treat them and their fellow neighbors.

Nothing like that had been done before and caused a revolution of sorts as it gave the people a voice to stand up against the unfair and unjust law enforcement, as well as shed light onto what was going on the in these certain neighborhoods on a daily basis. Dre (Corey Hawkins) and Ice Cube (Ice Cube’s son O’Shea Jackson Jr.) were already creating beats and rapping about the streets at local rollerskating rinks and other parties in town to get by, and people were taking a keen liking to the new style of rap. It was then that they asked their drug-dealer friend Eazy-E (Jason Mitchell) to front the money to cut single, which would become ‘Boyz n the Hood‘, as Dre made the music, Cube wrote the lyrics, and Eazy sang.

It didn’t all come easily either as we see in a humorous scene where they finally talk Eazy into getting on the microphone, and realize he sounds awful, that is until Dre gives him some advice and direction, to which we hear those iconic lyrics, “Cruisin’ down the street in my 64″. This film is made up of moments like this, and it’s so much fun to see how these amazing artists came up with it. After the ‘Boyz n the Hood’ single was released on Eazy’s Ruthless Records, Jerry Heller (Paul Giamatti), a music manager comes after Eazy and tells him her can bring him to the top of the music game. All seems kosher and right with Jerry at first, but he’s focused on Eazy rather than anyone else in the group, leaving Dre, Ice Cube, MC Ren, and DJ Yella without pay or claim to their contributions to their first record ‘Straight Outta Compton’.

As we go through these guy’s careers, we also see their vulnerable side, as they struggle with fame, death, law enforcement, and even the federal government who try to cease and censor their music. We even see the origin of their famous song ‘F*ck the Police’, after several repugnant L.A. police officers force these guys to the ground outside their music studio for doing literally nothing, which is something these musicians have witnessed and been privy to many times before. We also get glimpses of how TuPac, Snoop Dogg, Warren G, and Suge Knight came into play as well, with their usual claims to fame, whether it be how Snoop and Dre created “Nuthin’ But a “G” Thang“, Dre showing ‘California Love‘ to TuPac, or Suge Knight showing his true violent colors.

It’s all well directed and executed in a manner that you’d always hoped it would, which respects these artists. The film spans quite a few years and gives each person enough time to relate and sympathize with, which is key in this story and Gray shows each sequence, emotional moment, and concert flawlessly. The actors here are perfect as well, and all show some great promise in their future careers. Each performance was spot on and very believable, pulling out each emotion perfectly. You might even muster tears at certain points from these great performances.

Not only that, these guys look so much like the real-life people they’re portraying that I forgot I was watching different actors several times throughout. Their facial expressions and mannerisms are spot on. And of course, Paul Giamatti plays the asshole business manager/agent very well, just like he’s played in several other films in his recent career. Then of course there is the music, which is chock full of the greatest rap hits from this time period. You’ll find yourself moving to the beat with each song. It’s hypnotic in a way.

‘Straight Outta Compton‘ is one music bio-epic you can’t miss. It’s an incredible film that is executed exquisitely, and not only that, it’s an important film, that showcases some of the violence of law enforcement that is going on today. This is a must-see. 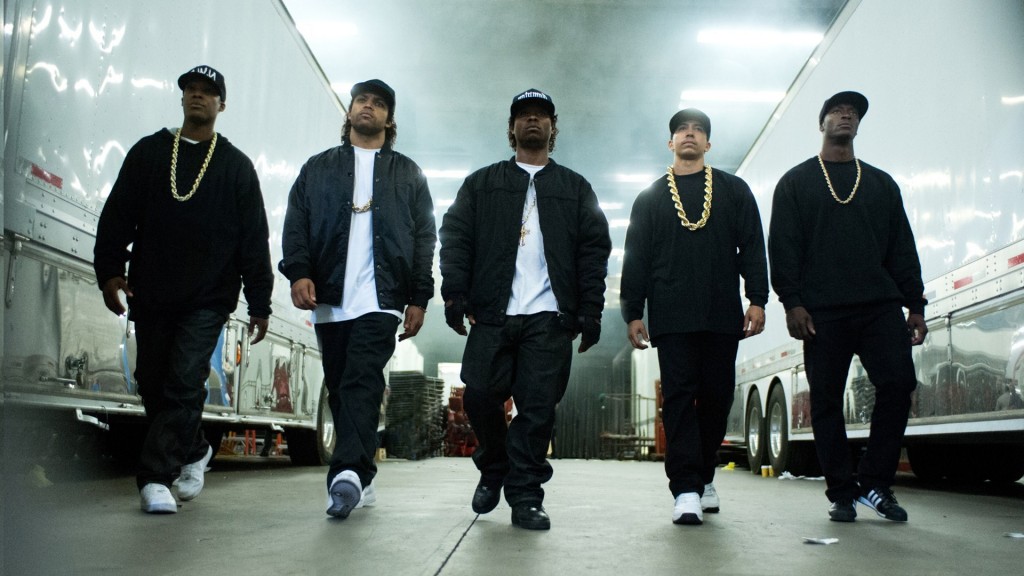 ‘Straight Outta Compton‘ comes with a great 1080p HD transfer and is presented in 2.40:1 aspect ratio. The overall appearance is impressive. The detail is well-defined, sharp, and vivid throughout the film. Closeups reveal individual hairs, make up blemishes, and wrinkles on the actor’s faces. The heavy stitching on the baseball caps and jerseys look impressive as well. Wider shots of the studio sessions and inside the luxurious homes also look amazing, never going soft or vague. Everything is highly detailed. Colors are well-saturated and balanced as well. Colors do pop vibrantly in the exterior shots with tons of primary colors, but otherwise, the color spectrum is more earthy and dark here. Black levels are deep and inky with no crush and the skin tones are always natural. There was zero compression issues as well, leaving this video presentation with great marks.

This release comes with a demo quality lossless DTS-HD MA 5.1 mix and is exactly they type of sound you want. The star here is the music itself with each song and live performance, sounding full, robust, and full immerses you in the audience, no matter if you’re in a small club or giant stadium venue. It’s that good and there is a difference to be heard there. The bigger performances are looser and pack a ton of bass, just like at a real concert, where as the smaller venues are tighter with a good amount of ambient noises surround as well. Everything is perfectly balanced and has great directionality. Sound effects of city life and the recording studios are equally impressive. Dialogue is always crystal clear and easy to follow, and completely free of any pops, cracks, hiss, or high shrills. The bass comes at you full on during the music scenes as well as the performances, but never crosses into that rocky territory. Each sound is nicely prioritized and never overly done. The LFE is excellent and the dynamic range is very wide, leaving this audio presentation with top marks. 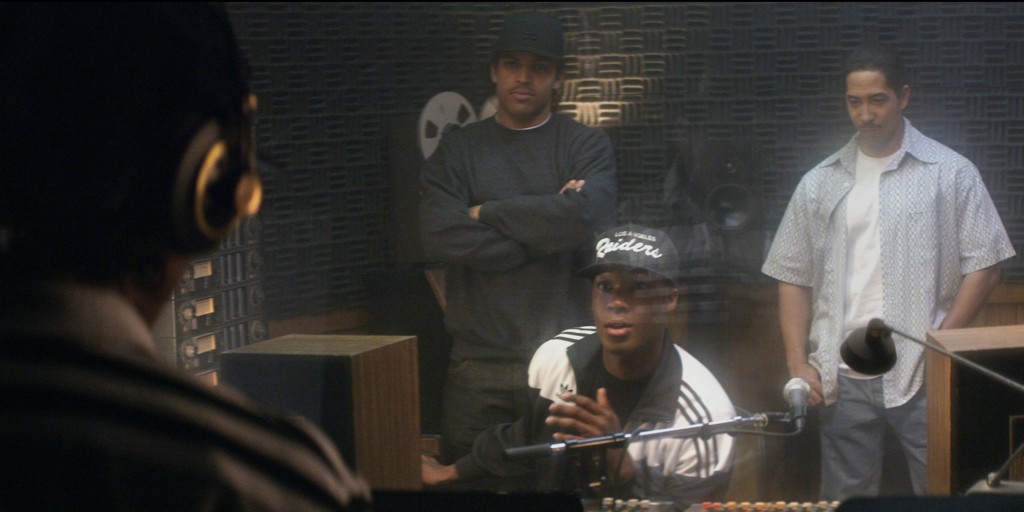 Extended Cut (HD, 167 Mins.) – There is an option to watch the theatrical version or the extended cut here. The extended cut is 2o Mins. longer and is worth watching.

Deleted Scenes (HD, 7 Mins.) – There are six very short deleted scenes here, which are worth watching.

N.W.A. The Origins (HD, 4 Mins.) – The original N.W.A. members discuss their music, getting together, and making the film.

Impact (HD, 2 Mins.) – The original N.W.A. members talk about the cultural impact of their music.

Director’s Journey (HD, 4 Mins.) – This is more or less about filming the riot sequence and what really happened back then.

N.W.A. Performs in Detroit (HD, 5 Mins.) – The original N.W.A. members discuss the song ‘F*** the Police’ and shows how they shot the big concert sequence.

Becoming N.W.A. (HD, 9 Mins.) – Here is a bit on casting the actors and how they became their roles. 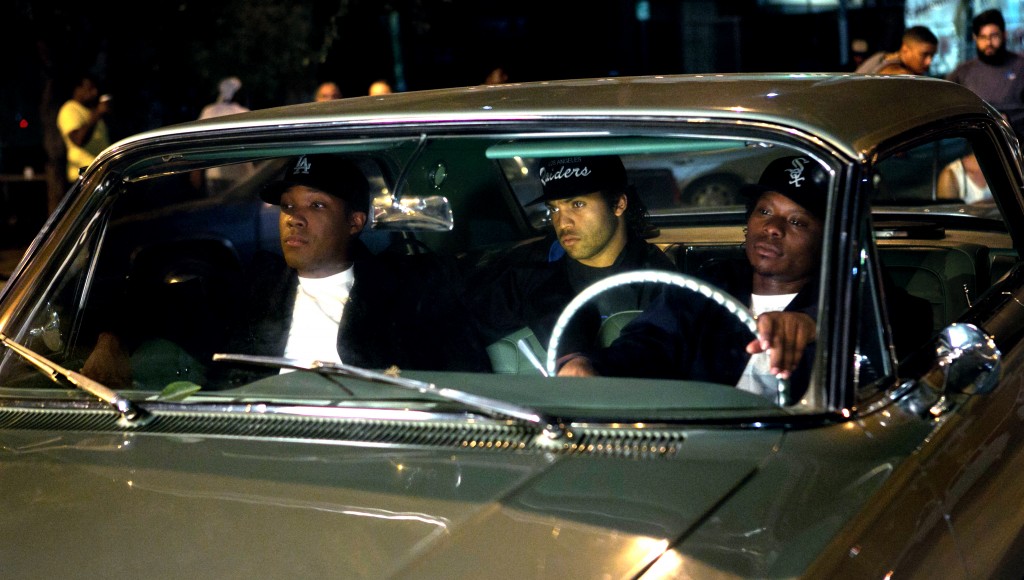 ‘Straight Outta Compton‘ is one of the BEST films of 2015. It should have been nominated for more than what it was at the Oscars. The performances, music, and technical aspects of the film are all amazing. This is one of the better music biopics if not the best one in a long time. No matter if you’re a fan of the music or not, you’re gonna love this movie and slowly become a fan of their music. The video and audio presentations are top notch, if not demo-worthy, and the extras are all worth watching, although I wish they were a little bit longer. Still, this Blu-ray is a MUST-OWN!