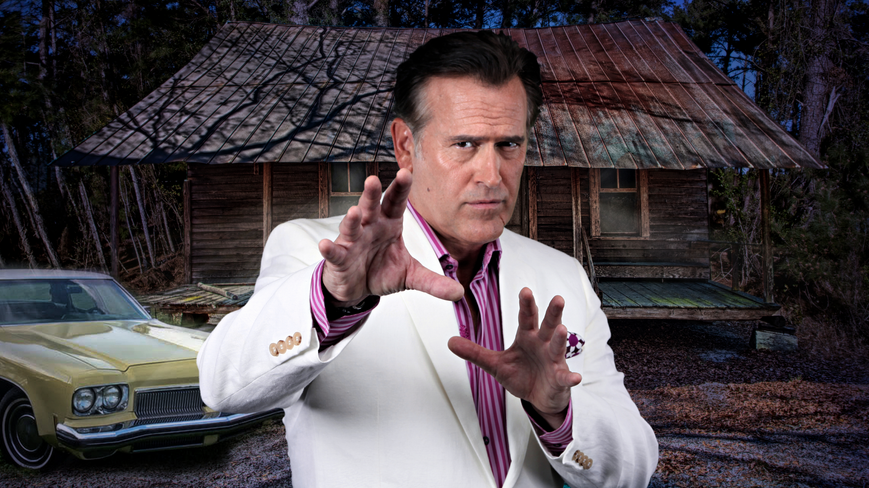 If you’re sad that TBS canceled ‘King of the Nerds‘ after 3 seasons, rest a little easier knowing that another reality competition series is amping up and shopping for networks to host the game show that will be very similar to the formula KOTN used with one little twist – Take out the “nerd” and sub in “horror”!!!

Coming from horror-comedy legend Bruce Campbell, 5X5 Media and KOTN exec producers Craig Armstrong and Rick Ringbakk is a series tentatively titled ‘Bruce Campbell’s Horrified‘ and it’s meant to be a celebration of horror fans and all the things they love. The notion of the show is still having finishing touches applied to it but rumor is the contestants will live together in, essentially, the ‘Big Brother‘ house that’s been dipped in ‘The Addams Family‘ and rolled in every horror, creeper and spook that’s been seen on screen. There will be individual and team challenges comprising themed episodes under the same sub-genre like monster, sci-fi, zombie, what have you. The set will be decked out according to the same theme and there should be visual effects aplenty and more than enough costume love to get any thriller fan’s blood pumping.

Armstrong and Ringbakk began the idea of a series with a fan-friendly approach to the horror way of life and the only name to host such a show was Campbell. He’s currently starring and exec producing ‘Ash vs. The Evil Dead‘ series and was more than excited to come aboard the new project tossing ideas into the mix.

“From where I’m sitting, this is the first time a reality series has melded competition and comedy with the fun and fear of the horror genre,” Campbell said. “It’s a sweet spot I love and to pull it off takes a team of creative, industrious and slightly insane people – which is, of course, why I wanted to do it!”