Blu-ray Review: ‘The People Under The Stairs’! 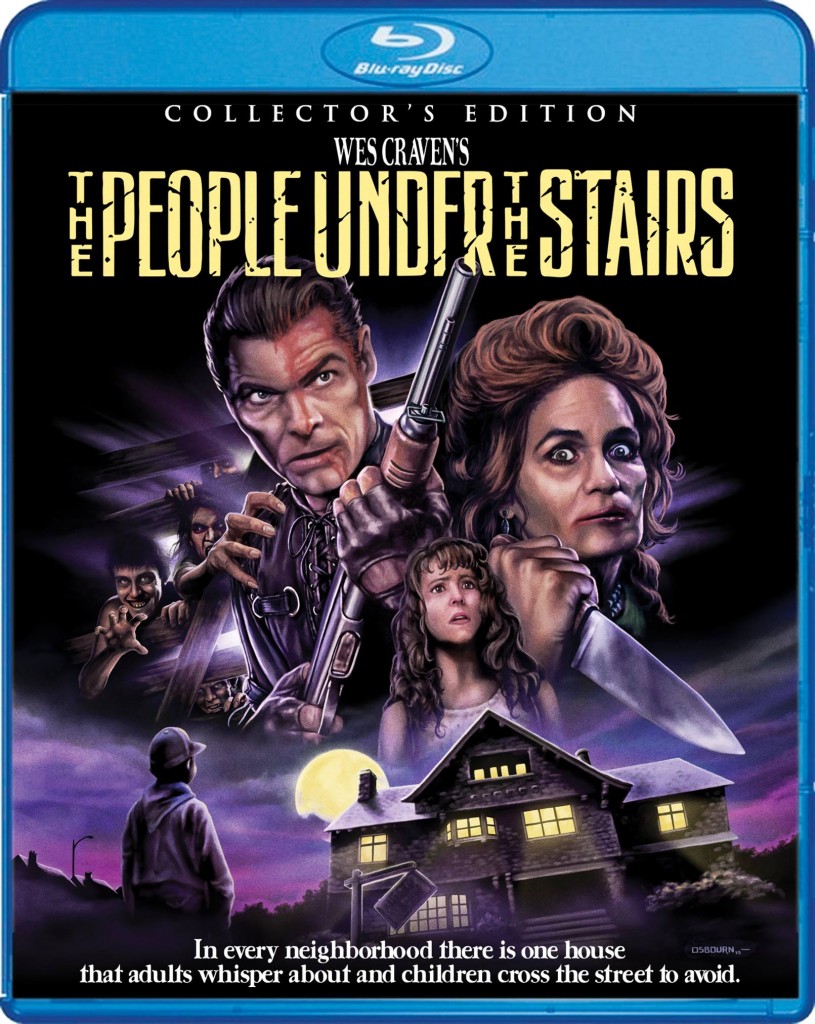 I remember first seeing Wes Craven’s ‘The People Under The Stairs‘ on my television at home, when I rented it on VHS at the local video store, back when they had movie rental locations in the early 90s. I had already seen ‘A Nightmare on Elm Street‘ and knew who Craven was at that point, and I knew I had to see his new film. I instantly loved it, as it followed a kid my age in the film. I thought it was quite funny and scary all at the same time as Craven perfectly balanced the two genres here. It also did quite well in theaters, making over $31 million dollars on a $6 million dollar budget, and went on to become one of the cult classics we still love and cherish on television today.

I think what works so well with ‘The People Under the Stairs‘ is its political and social commentary on the class system in the US as well as the over-the-top characters, particularly the bad guys, and how they deliver their roles, showing that no matter how much money you have, you can still be a psychotic and looney individual, which is something we see often these days as well. Not only that, Brandon Adams (‘The Mighty Ducks‘, ‘The Sandlot‘) is so charming and personal in this film, that you can’t help but want to be friends with him.  Brandon plays Poindexter or as others call him, “Fool”, who lives in a very bad neighborhood in project housing with his mother and sisters. His mother is very sick and needs medical care, but they can’t afford it.

They also can’t afford their rent and are about to be kicked out, which is where Leroy (a young Ving Rhames) and his partner, two thugs in the neighborhood enlist Fool to con this wealthy family into stealing their gold. This wealthy family also own most of the low income housing where Fool and his neighbors live, and have never provided upgrades or repairs to the place, but have always raised the rent. They soon find out that this wealthy family has a deep dark secret.

Turns out, this family goes by Mommy and Daddy (Everett McGill and Wendy Robie respectively) and have a “daughter” of their own. Their house is full of trap doors and high end security to prevent people from getting inside, or getting out of their house. In fact, this “Mommy and Daddy” are sadistic murderers who have kidnapped tons of kids and have kept them in their basement to rot, while Daddy runs around in a gimp suit with a shotgun. This is what Fool and Leroy find out first hand as they try to survive with the help of Alice (A.J. Langer), who is not fond of her “parents”.

What follows is partly slapstick funny with a mix of pure horror, as Fool tries to find an escape route out of the house without getting killed. He even finds out that a few secrets of the family in the process, including meeting one of the people under the stairs and finding out Mommy and Daddy have been keeping everyone’s money and gold. Everyone’s performance here is just spot on, particularly that of McGill and Robie’s who just give it their all with a great blend of sadistic and comical. They are truly memorable here, as Brandon’s performance is true and realistic. ‘The People Under The Stairs‘ still holds up for me after all the these years and is still one of my favorite horror-comedies. 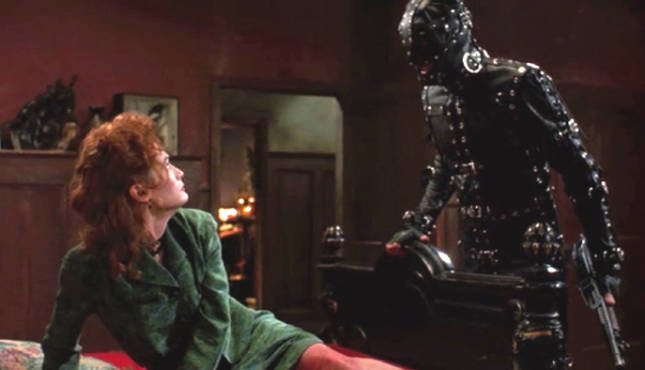 ‘The People Under the Stairs‘ was already released on Blu-ray less than a year ago from Universal, but Scream Factory wanted to do their version, which in video presentation terms, seems to be almost identical looking. This release comes with a 1080p HD transfer and is presented in 1.85:1 aspect ratio, and again, looks very similar to the one from last year. The detail still looks sharp throughout, despite a few minor issues. Closeups reveal good facial features such as the makeup effects, sweat, and individual hairs, and the costumes reveal fine textures as well as the gooey wounds.

Wider shots look just as good, as it displays the imperfections in the old decor of the creepy household, dust and all. There is still a good layer of grain that never fluctuates, except at the very start of the film, but then fixes itself shortly after. Colors never really pop off screen, but they are well balanced and saturated to a flawless degree. There are never any muted hues or color correction problems here. Darker sequences have good black levels, although there was some crush and some yellow spots I noticed, but it’s nothing to write home about. The skin tones are also natural looking too. There were still some minor instances of dirt and debris, particularly during the beginning, but other than that, this video presentation looks might good.

The audio portion here comes with a lossless DTS-HD MA 5.1 option as well as a DTS-HD MA 2.0 stereo mix. The previous release only had the 2.0 version. Needless to say, this is an upgrade with the 5.1 sound. It sound great with all of the creepy yells and sounds coming from the walls in the movie. This fully immerses you inside the creepy household, as your surrounds get a good workout here.

The directionality is spot on and the sound effects are well balanced, layers, and loud, providing a great soundscape.The dialogue is clear and easy to follow as well, and the score is always eerie and adds to the suspense of each scene without drowning out any of the dialogue or sound effects. The bass has a nice rumble to it as well and never becomes rocky at any time. The LFE is great and the dynamic range is wide, leaving this audio presentation with a solid sound.

Audio Commentary #1 – Director Wes Craven gives his thoughts on this movie so many years later here with Micahel Felsher asking him questions during his commentary to keep things going. Craven is excellent to listen to here as he talks about Tarot cards and the origins of the story.

Audio Commentary #2 – Brandon Adams, A.J. Langer, Sean Whalen and Yan Burg are all together talking about the movie. These actors have a lot of fun discussing some of the fun memories from the set and filming, but that’s about it. Also, there are some gaps in the commentary here.

Interview with Wendy Robie (HD, 20 Mins.) – The evil mother in the film Wendy Robie discusses her role in the movie and working with everyone on the film. She is truly excited and blessed that she got to play this role and forever grateful. She has some anecdotes about being on set and working in theatre.

The Effects of ‘The People Under The Stairs (HD, 15 Mins.) – This is a fun extra where Robert Kurtzman, Greg Nicotero, and Howard Berger talk about working on the film in their young careers on a tiny budget. There is also some good behind the scenes effects here as well.

House of Horrors with D.P. Sandi Sissel (HD, 16 Mins.) – This director of photography talks about working on location and on set with everyone, and how she finds this movie funnier than scary.

Behind the Scenes Footage (SD, 7 Mins.) – Here is some B-roll of the actors and filmmakers having fun with one of the special effects  corpses on set.

Vintage Making of Featurette (HD, 4 Mins.) – This is a promo reel for the film from when the movie came out with interviews with the cast and crew.

Original Storyboards (HD, 7 Mins.) – A slideshow of some of the storyboards from the film. 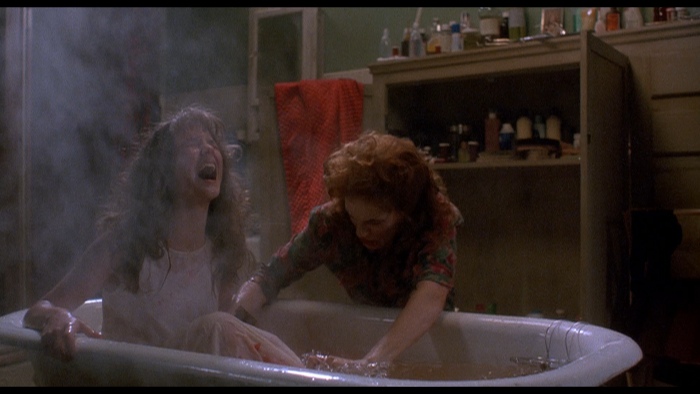 ‘The People Under the Stairs‘ is still an excellent film that mixes both horror and comedy together. The performances by everyone involved still works on every level. There are plenty of moment where you will equally laugh, be shocked, and cower in fear with this film, as Wes Craven has made one heck of a movie that has lived on for the better part 25 years. The video and audio aspects are both commendable and the extras are all worth watching, although a bunch of the actors decided not to come back for on screen interviews. That being said, whether you do or don’t have this in your collection yet in a previous release, this Scream Factory Edition is HIGHLY RECOMMENDED for the amazing extras as technical merits.