Who would have thought that Seth MacFarlane’s (creator of ‘Family Guy‘) first feature film about a pot-smoking foul-mouthed teddy bear would have made over $550 million at the box office back in 2012? I certainly didn’t expect it, but it’s the sole reason why we have the sequel to ‘Ted‘, simply titled ‘Ted 2‘. I’ll be honest with you. Macfarlane did a fantastic job with the first film, making an ‘R’ rated comedy with heart and enough laughs that are still memorable today. He even threw in some great cameos and nods to pop culture references, much like ‘Family Guy‘ does.

Even though the first film dragged a tiny bit in a few places and got off the rails, it still was a very enjoyable experience. A little later, MacFarlane made his comedy western ‘A Million Ways to Die in the West‘, which had a few laughs, but tried to hard to deliver every joke imaginable. It was forced and not by using the force by any means. That is more or less the case with ‘Ted 2‘, although I did laugh almost from start to finish with the hilarious raunchy dialogue that is still topical.

The main problem with ‘Ted 2‘ is again, trying to put to many references and gags into a short amount of time. There is no real benefit to it at all other than saying, “Hey look, there’s that reference to that movie or actor.” While it might make for a quick second smirk or laugh, it is almost immediately forgotten to get to the next pop culture reference. And when you teeter on doing a few dozen of these in the span of ten minutes, it becomes tiresome. 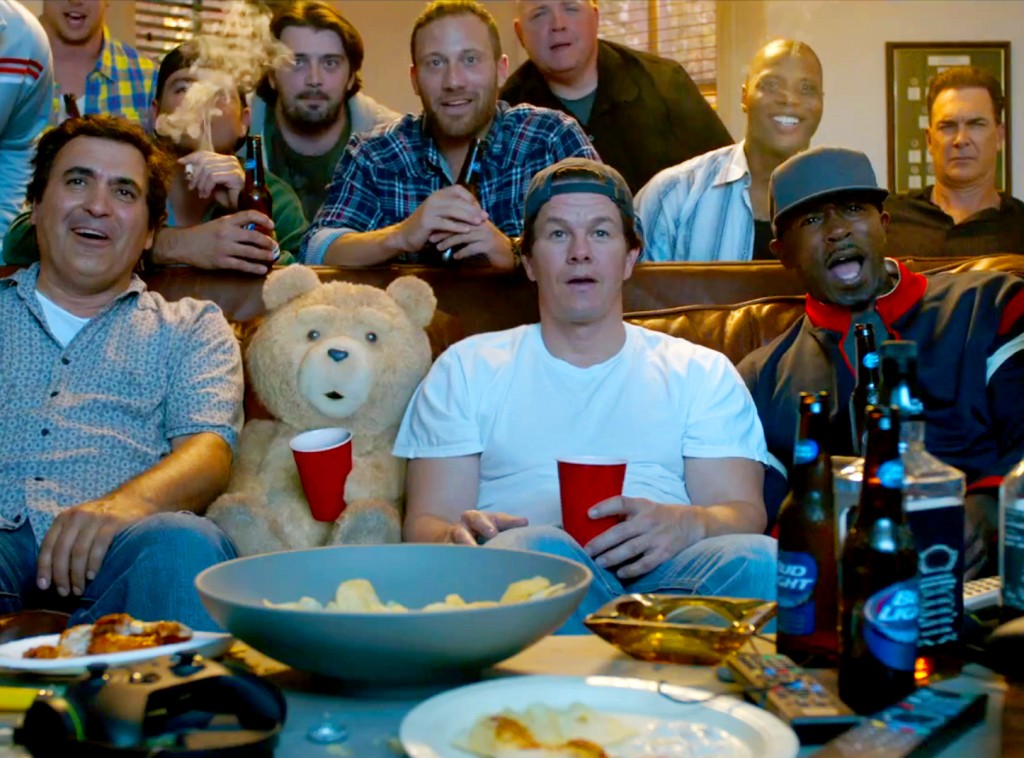 Also, ‘Ted 2‘ runs right at about two hours, which is a little bit longer than the first film, complete with the some slow moments that don’t forward the film any, but instead rely on over-the-top laughs to get a cheap rise from the audience. I don’t mind that so much, as long as there’s a point, but with this movie, there isn’t.

The story is good enough in the sequel, which takes place a couple of years down the line where Ted has married Tami-Lynn (Jessica Barth) and John (Mark Wahlberg) is divorced from Lori (Mila Kunis) from the first film. Trouble is brewing in the new marriage where Ted thinks having a kid with Tami-Lynn is the solution to their marital problems. However, he is not anatomically correct and cannot bear a child. So they try a few routes, which prove unsuccessful, including breaking into Tom Brady’s house and trying to steal his manhood.

They also try adoption, which catches the ears and eyes of the government in stating that Ted is in fact not a human or a person, but rather “property” and is denied citizenship and forced to lose his job as a grocery store clerk and more importantly, his marriage is not recognized by the state anymore. This problem sets the tone for the rest of the film as Ted and John embark on a legal battle to win his citizenship. They enlist the help of newbie lawyer Sam Jackson (Amanda Seyfried), who is taking on her first case with Ted, which he is reluctant to have her represent him. But, when she breaks out a bong in her office and tokes up, Ted and John know she’s the right one.

Through 80’s montages and a trip to New York to seek the help of the country’s best civil rights’s lawyer (Morgan Freeman), ‘Ted 2‘ is packed with laughs, which ultimately ends up at New York Comic Con, where all things pop culture collide in an epic battle, including Donny (Giovanni Ribisi) takes place. First and foremost, Mark Wahlberg is fantastic here in this movie. He has perfect comedic timing and sells every line and action with an invisible bear. He needs to do more comedy like this, because he excels at it.

McFarlane again has one of the best voices in America right now and is so believable and funny as the voice of Ted, that I can’t help by want to listen more. Seyfried holds her own with the guys here as well and is always a delight to see on screen. The 80’s-90’s movie references were quite impressive, so be on the lookout for those Spielberg and John Hughes moments throughout.

Oh yeah, and I’d like to mention that Michael Dorn and Patrick Warburton are in ‘Ted 2‘ as well and they bring a few surprises to the table. ‘Ted 2‘ is one of those typical comedy sequels that thinks that the bigger the movie is, the better it is. This is an aspect of sequels that is all too common, and it doesn’t always pay off. Still, ‘Ted 2‘ is rather enjoyable with tons of laughs. Maybe enough for two movies, but it lacks the magic the first film had.