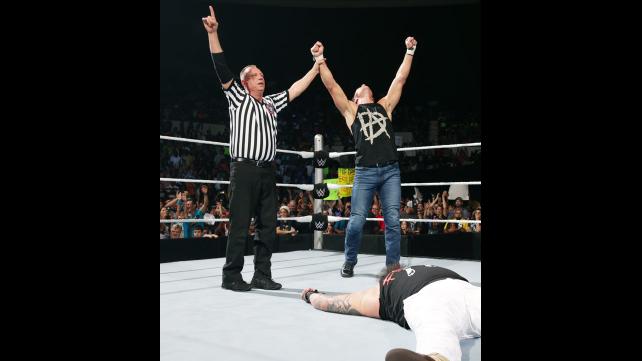 The WWE’s Smackdown blew into Norfolk, VA and it brought with it the return of Roman Reigns! What would he have to say for himself after being soundly defeated by the WWE World Heavyweight Champion at Payback (which can be seen on the WWE Network FREE in the month of May)? The WWE’s tag team division also began to heat up in anticipation of the first ever 6 team Elimination Chamber match in less than two weeks. The Divas got into a war of words and The Lunatic Fringe saw action against the New Face of Fear. Did you miss this week? Find out what happened now! 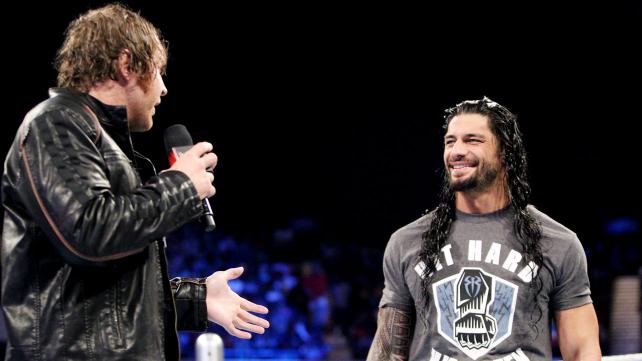 The night kicked off with the Big Dog arriving on to the scene. Roman told the WWE Universe that he had some bad news and some good news Bad news: He didn’t win at Payback. Good News: He had a really good time at Payback, cuz any time you got to punch Seth Rollins in the mouth was a good time (RUDE!!!) But he realized he needed to rethink his game plan because while he could chase Seth around every week, he understood he would not get any where near him. So his new plan of attack would be to enter the Money in the Bank Ladder match.

Things picked up when Dean Ambrose came out. First he apologized to his brother from another mother about interrupting him but he heard payback, his ears started burning, went to go find a bucket of ice to dump his head in, took a wrong turn at catering and then found himself out in the ring. But before he came out he heard Reigns speak about the ladder match and he got all excited. But the Unstable one mentioned that he wouldn’t be in the Ladder Match because he would already be champion by then (uh… I think not Mr. Ambrose!)

The Director of Operations then decided it was high time to restore order to the evening as he came out and informed Roman what the back of the line meant. That he was NOT going to be in the Money in the Bank ladder match because he had done nothing to prove that he deserved the opportunity. Dean interrupted and once again mentioned Kane’s family and as a result found himself put into a match with Bray Wyatt (which Dean was more than happy to get seeing as he had unfinished business with the Eater of Worlds.) For Roman, the Corporate Demon gave the night off to reflect on his failures as a competitor (he is on a bit of a losing streak after all). Reigns was cool with that but promised that while eating cheesecake and crab cakes, he was going to watch the show and make sure Kane did everything that was best for business. 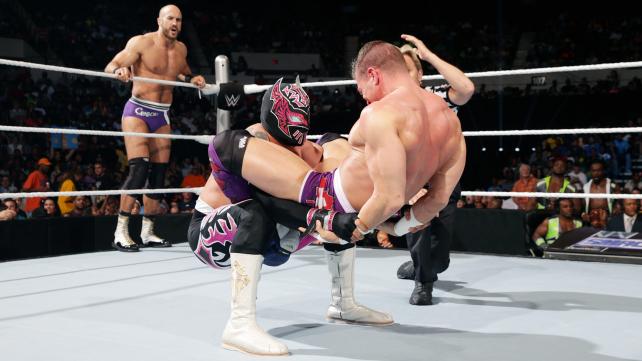 Chaos ensued as 4 of the 6 teams battled in a four corners tag team match. It was but a taste of the insanity that is sure to happen in less than two weeks at Elimination Chamber. The action was furious and each team show cased why they deserved their spots in the match for the WWE Tag Team Championships. The Lucha Dragons flew, The Ascension dominated, Los Matadores used their cunning, and Cesaro and Tyson Kidd kit their swing/drop kick combo. But it was Kalisto with a hurricanrana pin combo that won the match for his team.

This match was bedlam. It was only in order for the first few seconds before people were making hot tags and forcing the other teams out of the match. The Ascension are a force to be reckoned with.If they would ever get their stuff together and realize they could own the division like they did down in NXT, then that is what they need to win at Elimination Chamber. Los Matadores just seem a bit out classed by every other team in the match. Kinda feels like they were thrown in just to make six teams. The Lucha Dragons, while new to the division are quickly becoming fore runners for the tag team titles. Tyson Kidd and Cesaro are still as hungry for the gold now as they were before. If this match is any indication of what the WWE Universe can expect in less than two weeks, then we are in for a treat! 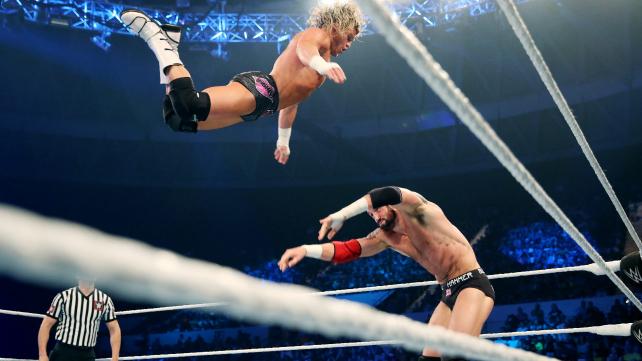 Two of the men in the Intercontinental Championship Elimination Chamber match squared off against one another in one on one action on Thursday night. Dolph Ziggler and Wade Barrett have faced each other in the ring before and just like all the times before, this match was intense, high paced and brutal. No one gives a beating like the King, and no one looks better getting beaten on than the Show Off (and if you keep up with me, then you know that is a compliment.)

It was all Barrett in the beginning as he delivered his signature brawling style offence , but the Zig man battled back and narrowly avoided a couple Royal bull hammers to hit an opportune Zig Zag to pick up the win over our monarch. As he celebrated his victory, the Ravishing Russian made her way on to the stage to offer a congratulations from afar.

These two have amazing chemistry in the ring together and their different styles mesh seamlessly. Never has a match between Wade and Dolph disappointed and this one didn’t either. I like what is developing between Lana and Ziggler. It is intriguing, but I can’t help but wonder if this is but a ploy to make sure that Rusev comes out on top at Elimination Chamber? Imagine this. It comes down to Rusev and Dolph as the last two men. And then Lana redeems herself to the Bulgarian Brute by ensuring IC Gold by costing Dolph the title. A girl can dream after all. 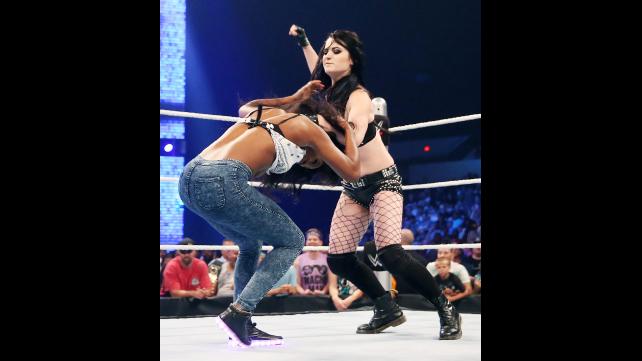 Monday night saw the return of the Anti-Diva, Paige. Last we saw of the Brit was in London when she won the Diva’s battle Royal to determine the number one contender to the Diva’s Championship. That is when Naomi attacked her and put her out for a month. Well Paige had some words for her attacker. She marginally respected her for taking what she wanted, but that this was her house.

Naomi, followed by Tamina, came out and verbally sparred with the Diva of Tomorrow but when words no longer sufficed, Naomi and Tamina flew into the ring to “Clean House.” The two then began a 2 on 1 assault on Paige, quickly overwhelming her. Nikki Bella ran down to the ring to make the save. But as Paige did on Monday, Nikki asserted her dominance over the Diva and gave her a Rack Attack, leaving only herself standing tall with the Diva’s Championship.

It is good to finally feel passion coming from the Diva’s division. for too long it felt flat and and as if the women involved were just going through the motions. It lacked fire and drive. And if they didn’t care, then why should the rest of us. This segment between all four women had emotion and a bite to it that has been sorely lacking in the Diva’s division. I can get behind this and care. I am interested in to seeing how this develops. 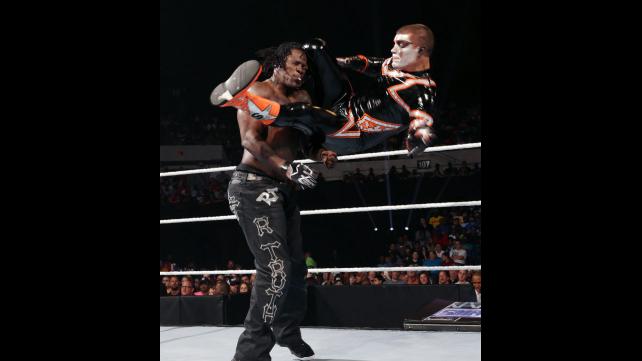 Stardust and R-Truth faced off again. While previous bouts have been entertaining in the past this match did not hold my attention very well. It was a back and forth bout with Stardust taking yet another loss. The only thing that I really found interesting was the ending. (no that is not a compliment, I was ready for the match to end.)

Makes me wonder, it was a losing streak that brought about the birth of Stardust. Will this losing streak bring about the rebirth of Cody? I do like that in his losses and frustration, it feels like we are seeing the Stardust person crack. Yes, I’m getting all psychological on you now. Stardust was born of Cody’s need to reinvent himself into a winner. Now that he is losing on the regular, will he realize that he didn’t need the new personality and find mental peace with Cody Rhodes? Only time will tell. 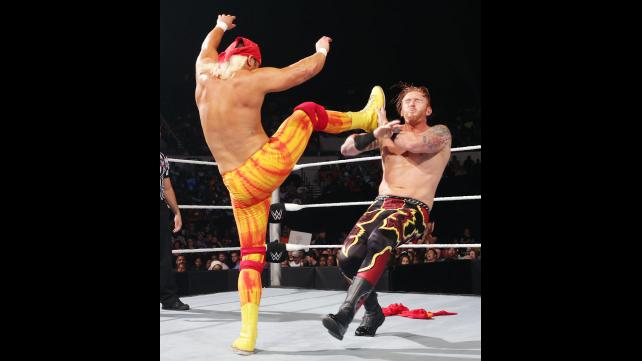 So while I had hoped that the Mega Powers thing was dead after their loss at Payback, I was sorely disappointed. Granted they went against the WWE’s resident jobbers, so they picked up a win and got to have fun with it and the WWE Universe was entertained. And that’s what is really important isn’t it? That we are all entertained. 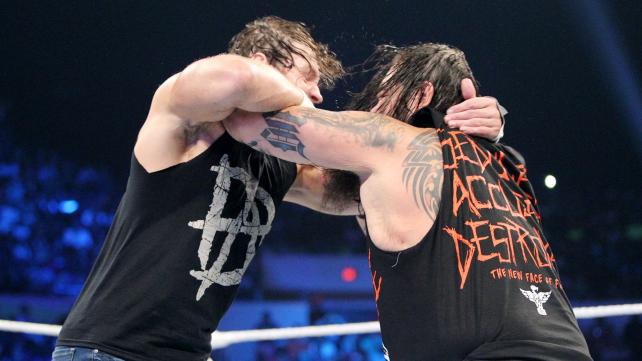 Dean Ambrose had unfinished business with Bray Wyatt. Bray Wyatt said Dean was in his way. Both men, aimed to destroy the other in a knock out drag out fight where there was no one moment where either held on to offensive momentum for more than just a few moves. Both men rallied and countered and hit just as hard as he got hit. Ambrose flew threw the air, so did Wyatt. Each man knowing the other so well that the WWE Universe was on the edge of its collective seats through the entire match.

But much like Monday, J & J Security attempted to make sure Ambrose knew his place in the pecking order of the WWE. And as our beloved Champion made his way down to join his security team in delivering this lesson, Roman Reigns crashed the party and inserted himself in business that he had no right to interject himself in. He destroyed Jamie and Joey and kept Seth Rollins at bay. As the Ref was distracted, he then delivered a Superman punch to an innocent Bray Wyatt allowing Dean to pick up the win.

Who does Roman think he is? Seth was on strict Authority business to teach Dean a lesson about how tings work and then he helped Ambrose to cheat and pick up a victory. He made a mockery of the match and the win was tainted. Dean could have beaten Wyatt on his own, but a lesson had to be made since the Lunatic Fringe is notoriously stubborn when it comes to these things. Come Monday, The wrongs of this evening will be righted. Believe That…