The last show before NXT Takeover: Unstoppable ( which can be seen on the WWE Network for FREE in the month of May) was an action packed hard hitting thing that left the NXT Universe hungry for more. Things came to a boiling point between Sami Zayn and NXT Champion, Kevin Owens as they shared the ring in a verbal confrontation. The Big Bad Wolf also gave his answer to the Man Beast in a most explosive manor. The fun didn’t stop there, did you miss it? Find Out What Happened Now!

The match between Solomon Crowe and Baron Corbin was intense. The Hacker’s style is unorthodox and Corbin had to adapt like never before in order to keep from losing to the eccentric wild wrestler. It took an End of Days out of no where to Crowe, who launched himself from the ropes, to put pick up the victory.

After the match, as the Big Bad Wolf of NXT celebrated, The Man Beast came down and demanded an answer to his challenge. Never one to back down from a fight, Baron accepted the match at Takeover. But to put an exclamation point on it, Corbin began the brawl right there. It took the NXT Locker room emptying to separate the two powerful men. As Baron was pulled away, still yelling his challenges to the man in the ring, Rhyno gored everyone in sight and cleared the ring.

The match between Solomon and Baron was short and sweet. It was good to see Crowe and it was enjoyable that he held his own for a moment against Corbin. That End of Days though… thing of beauty the way he hit it. I must have rewatched that 5 times before going on. The intensity of the match up between Rhyno and Baron is something tangible. The NXT Universe was treated to a taste of what we can expect in this match as the two men clashed briefly. I can see this one getting ugly real quick. And it will be glorious! 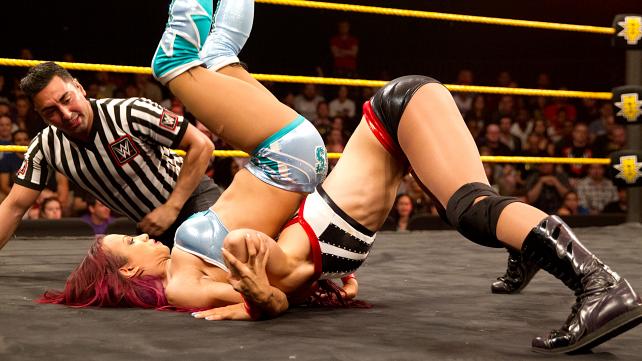 NXT Women’s Champion was looking to pick up a bit of momentum as she went into Takeover to defend her title. How did she do this? Well by facing a local competitor the NXT Universe adoringly named, Striped Shirt. The local chick took it to the champ early as she attempted a few different pin attempts but none were met with much success. Sasha easily picked up the win after regaining control of the match and put her opponent away with the Bank Statement.

I would have rather seen Sasha in action against someone with a name. Blue Pants perhaps? (hahaha oh I’m funny today…) No but really. More momentum would have been gained had she faced someone like Alexa Bliss, Emma, or Carmella. Somebody who would have given her more of a challenge. But hey a win is a win, and a win going into Takeover is exactly the type of momentum the Champion needs in order to retain her championship. 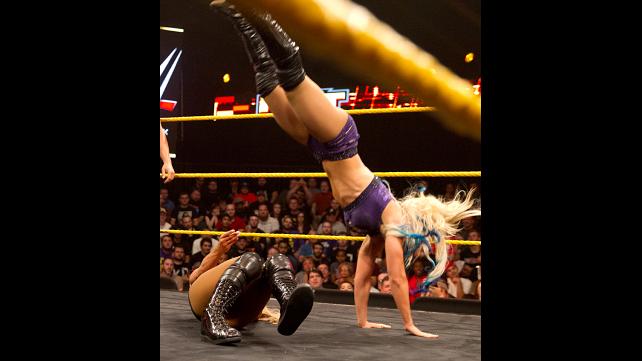 Speaking of Carmella and Alexa Bliss… These two ladies saw one on one action against each other. Their match wasn’t perfect but it was a back and forth bout that showcased both women’s skills in the ring. Carmella looked as if she was going to pick up the win, but she allowed herself to get distracted by the NXT Tag Team Champions, Blake and Murphy. Alexa capitalized on the distraction and hit a Sparkle Splash to pick up the win over the Princess of Staten Island.

After the match Blake and Murphy got in the ring and told Carmella that if she continued to hang out with trash like Enzo Amore and Colin Cassady, then she too would begin to smell like garbage. Carmella was steadfast in her belief in the Realest Guys in the Room as she then served up a verbal lashing that left the Tag Team Champions smarting. Even though her boys were not in the ring, they have the most momentum heading into the championship match next week.

As I said the match wasn’t perfect but it was entertaining. Both Carmella and Alexa have improved immensely and they work well together. Just a few hiccups here and there but nothing a bit more time in the ring together won’t fix. Blake and Murphy are approaching creeper levels of stalking and it’s a bit funny. Though, one would be a fool not to notice the looks between them and Alexa. Could that be something budding in the future? How could or would it effect their match at Takeover? Stay tuned, I’m sure things are just beginning to get interesting. 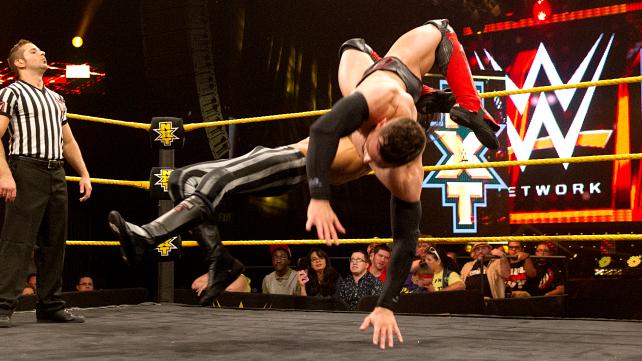 In a taste of what the NXT Universe can expect in the Triple Threat Match at Takeover, Hideo Itami teamed up with Finn Balor to take on Tyler Breeze and Adam Rose. While Adam and Tyler worked well together to keep Finn cut off from one another in the beginning and used the tactics of my people to stay on top. But the Irishman hit a devastating Pele kick and was able to make the tag to his partner. The Angry Japanese man roared into the match and cleaned house taking the offensive control easily from the other team with his signature strikes and kicks.

But communication and team work began to break down as Balor tagged himself in to the match and began to batter Breeze with his own signature offense. The Irish Demon had Prince Pretty in position for the Coup de Grace when Itami tagged himself in. The argument that began between the team mates allowed Tyler to capitalize and roll up Itami to pick up the win. And much like last week, he hit a Supermodel Kick and  Beauty Shot on both Finn and Hideo and stood tall above his Triple threat opponents. As Rose attempted to celebrate the win with him, Tyler nailed him with a Supermodel Kick as well.

This match was a fast paced insane thing. It was a treat to finally see Adam Rose wrestle as opposed to prance around the ring. He really is an amazing wrestler that doesn’t show that side of himself an more. The boy needs to quit partying so much and focus on his in ring ability. Tyler, Hideo, and Finn never disappoint when in the ring together. The Triple threat match at Unstoppable is going to steal the show. I think it would be interesting to see Breeze walk away with the #1 Contendership, but then I think what would happen to him if he had to face Kevin Owens… Don’t think we could continue to call him pretty after such a confrontation. 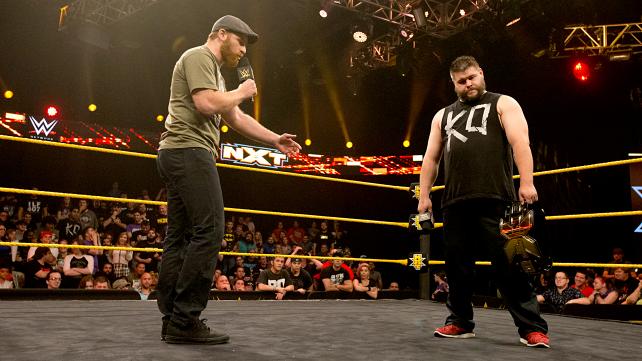 Sami Zayn wanted answers and he wanted them right then and there. He called NXT Champion Kevin Owens to the ring. Zayn insisted that he was not there to fight but that he wanted answers. He assured the Champion that while he was injured against Cena, that he was still good to go for their match next week, but he wanted to know why Owens had come after him the way he did. He asked the silent champion if it was professional jealousy. But then he made it more personal in asking if it was because Kevin’s son wanted to wear a Sami Zayn shirt vs a Kevin Owens shirt.

The Champion turned and left the ring with out a single word in reply to his challenger. At the top of the ramp, with out ever turning to face his former friend, Kevin Owens proclaimed that, he knew Sami was still hurt, that he was the one who had hurt him, and that at their match, by the end of it, Sami would not be able to wrestle again.

I got chills as Kevin spoke. He was so icy that you could almost build a snow man with his words. No answers were verbally given to Sami and I’m sure this will fuel his frustration going into the championship match. The momentum of both men is pretty even, neither one has an edge over the other. If anything though, Sami’s injuries do give Owens a slight edge who will do anything and everything to capitalize on the existing issues in his opponent. I do fear for Sami because I don’t think he has truly tapped into the darkness that he will need in ordder to defeat Kevin. Kevin on the other hand has made his intentions very clear. He will not be letting go of that championship any time soon. He fights to make a better life for his family (even if his son DOES want to wear Sami Zayn memorabilia)