It was yet another action packed hard hitting night from Full Sail University as NXT exploded all over the WWE Network. Alex Riley was set to take on NXT Champion, Kevin Owens in an effort to gain redemption and retribution. The NXT Universe also was treated to one helluva Triple Threat match that determined the #1 Contender to Sasha Banks’ NXT Women’s Championship. What other hard hitting matches were on the card to delight the appetite of the ravenous fans? Find out now! 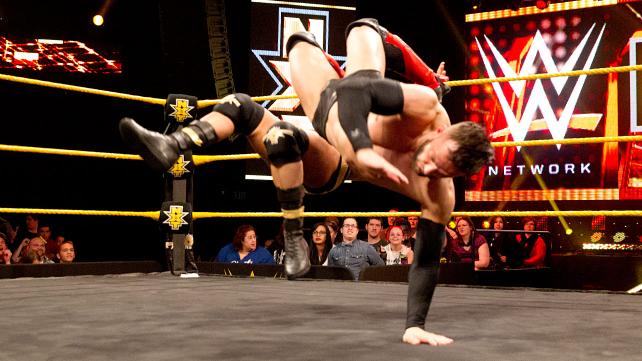 Things did not go as planned for Tye Dillinger as he worked his first solo match since his split with Jason Jordan. Of course, one could argue that he was doomed from the beginning as his opponent was the Irish Demon, Finn Balor.  Balor took control and never let go. At one point it looked like Tye was building momentum as he got in a few good chops but that was about it for he was on the defensive from then on out. One pele kick and a coup de grace later and Finn Balor was getting his hand raised in victory. But Prince Pretty, Tyler Breeze, has been watching Balor very closely. He came on the screen. The mayor of Cuteville called Balor the flavor of the month and vowed that they would see each other real soon.

It was a shame the match was so short but then again, it was Finn against Tye. Sure Tye needs to make a name for himself as a singles competitor but that is NOT against Finn Balor. The Irish Demon is in a league of his own. It was almost painful to watch… almost… Mostly it was fun and enjoyable, cuz hey, I’ve never denied my love of watching someone get a beat down and out classed by a clearly superior competitor. I am looking forward to seeing Tyler Breeze make good on his promise to Finn. Prince Pretty knows what he is doing and is no push over in the ring. his style will mesh beautifully and the NXT Universe is in for a treat when these two finally lock up.

Charlotte vs Bayley vs Becky Lynch

The NXT Women ALWAYS deliver and this triple threat contest was easily the match of the night. It seemed as if Becky was in for a rough time as Charlotte and Bayley double teamed her in the beginning. But their loose alliance broke down and the two began to exchange blows and chops that had the NXT Universe Wooing loudly. This gave Lynch time to recover and soon she threw charlotte from the ring and concentrated on the Super fan’s previously injured leg.

As Becky locked in her patented submission, Charlotte was back in it to break up the move with a Natural Selection that almost won her the match. The three women continued to battle bitterly and the move of the night ended badly for the Irish rocker as she caught a flying elbow from Bayley that was followed into a powerbomb from Charlotte. From there the genetically superior Diva was able to lock in a Figure four leg lock on  recovering Bayley and bridged it into a Figure Eight (hey that’s what Corey Graves called it so I’m going with it). But Becky had the instincts to crawl over and cover Bayley to get a three count essentially stealing the #1 contender’s spot from Charlotte.

This was a wicked match. There is no denying that this match was the best one of the night. Best one of the month and right up there with best one of the year so far. Becky Lynch becoming the number one contender was definately not something that i expected but I am happy to see. It’s wicked that she is getting a shot at Sasha and I look forward to seeing how she fairs against her former running mate. 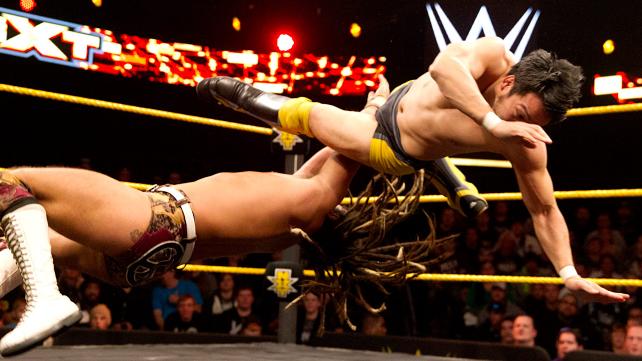 NXT’s resident angry hippie was at it again when he faced the angry Japanese man in one on one action. Parker attempted to dictate the speed of the match by using the ropes and the ref to his advantage as he was able to capture Hideo in a side head lock early one. CJ would continue to hold the upper hand briefly till Itami began to wear him down with viscous strikes and kicks. It went down hill from there as Hideo picked up the pace and continued to batter the eco warrior. One shotgun kick later and CJ Parker was pinned.

Hideo Itami continues to pick up momentum in his NXT career. I know that this with CJ Parker won’t last long and basically it was just an enhancement match. But it was still an enjoyable match. i’d have loved to see an actual story develop between these two as I think a decent fued is exactly what Hideo needs. But Alas, CJ Parker has taken his leave and if it weren’t for these tapings I’d not get to see my angry hippie fighting the good fight to save the planet. In the mean time i get to see my angry Japanese man kick ass. 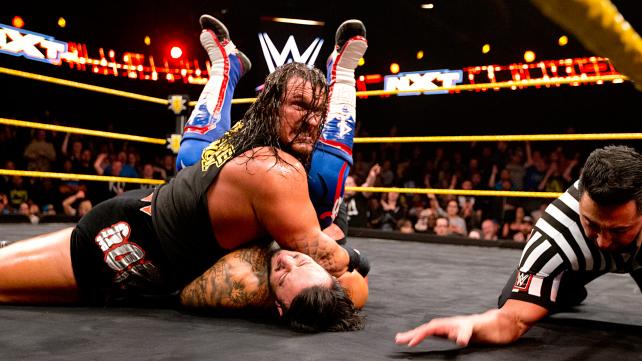 LOLRhynoWins! Clothesline, suplex, gore. That was the match.

Rhyno has lost no momentum after losing to Sami Zayn. But what’s next since he clearly is NOT the number one contender? Be cool to see him in a match against Baron Corbin. What better way to test Baron than to put him in the ring with the Man Beast? Oh Please Wrestling Gods, I’ve been a good-ish girl. Make this happen! 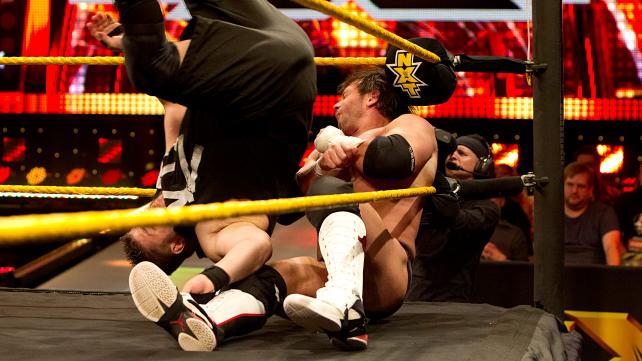 Got to give Alex Riley a bit of credit. The man has heart and boy golly does he have fight. He was fired up as he looked to find retribution against the NXT Champion for the disrespect that had been shown to him in the past and for the brutal defeat he experienced the last time the met in the ring. And boy golly did A-Ry bring the fight to the champion. A nasty drop kick to Kevin forced him to regroup outside, but this was a trap that Alex fell for as he went to retrieve his opponent only to get slammed onto the steel ramp.

With the wind knocked from his opponents sails, Owens set to work to dismantle Riley. No matter how much Alex fought back, how close to victory he seemed, Owens had an answer and more fight left in him. The NXT Champion took control of the match and delivered a brutal cannon ball to his dazed opponent and finished Alex off with a pop up power bomb.

After the match, it seemed as if the champion was going to leave, but nope. Kevin Owens needed to make a statement. He went to deliver an apron powerbomb to Riley, but Alex and his career were saved buy #1 contender tot eh NXT Championship, Sami Zayn. The two former friends proceeded to rip into one another having to be separated twice by officials. But that did not stop Sami as he took to the top rope and flew onto the assembled men and brought them ALL down. The NXT Universe then saw something for the first time, Kevin Owens in retreat. The champion had no choice but to regroup in a speedy manor from the leader of the Zayniacs.

Alex looks great in the ring. But if he insists on continuing to go after Kevin Owens, his career will be short and painful. i love watching A-Ry in the ring. The man is athletic and charismatic and it;s so much fun to watch him RAGE! But… Kevin is gonna kill him eventually. Now speaking of Kevin, holy crap he is gonna have the fight of his life when him and Sami square off for the NXT Championship. Sami is tapping into that dark place he needs to go. The dark place that allowed him to finally win the championship. No one knows the depths of exactly how dark Sami can get, I doubt even he knows. But he will need all that darkness to combat Kevin Owens.