‘Doctor Who’ Will Continue For Another 5 YEARS!!!!

Fandoms are made up of the most loyal, imaginative and awesome people the world-over. I’m proud to say I am the poster-child of the Super-Who-Potter-Lock order, throw in some Tolkien, Browncoats and comic book heroes/antiheroes (DC please!),  My Little Pony, and you know a small portion of what my brain contains, the rest is full of song lyrics, guitar riffs, Monty Python quotes and the list of people I want to have hot, crazy, balls-to-the-wall  sex with. I said all that to say this, we’re a devoted bunch of people and the possible cancellation of one of our series can result in an agonizing war-cry heard the world-over  (‘Firefly‘ flash-backs, anyone?) 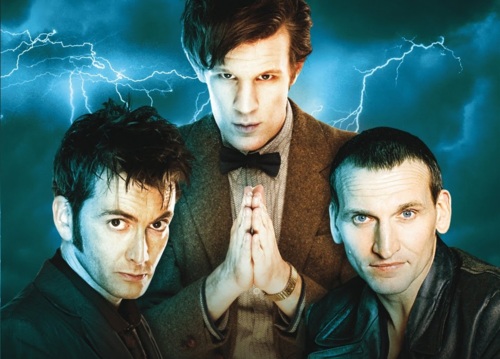 For the Whovians among us, we emitted shouts of glee when Christopher Eccleston took to the TARDIS in 2005 breathing new life, well as new as a 900 year old Gallifreyan can be, into the sci-fi series that ran from 1963-1989. Steven Moffat is the man who was responsible for bringing the show back in ’05 and his name is sometimes revered but more often used as a curse, as fans of the show will attest to his sometimes unwanted attention on our favorite characters. He’s basically the Joss Whedon of the Whovian Universe, a genius writer who is never afraid to grab hold of a character and twist to the point that it brings fans to tears, I’ve never forgiven Whedon for Wash’s death and watching Ten’s tearful goodbye with Rose and his regeneration into Eleven are some of the most tear-stained episodes of any series I’ve watched that have led me to the same conclusion with Moffat.

We’ve all wondered how long this incarnation of the time-traveling alien will last, with every new regeneration, the question presents itself again, “Will this be the last one?” We’ve got a little bit of exciting news on that front from Moffat himself, the BBC sees at least another FIVE years’ future for the series! Moffat said “I thought it would last 10 years. I didn’t think it would last 10 years with BBC Worldwide trying to get me in a room to talk about their plan for the next five years! It’s going to do a minimum of 15. I mean, it could do 26!” He then added “Ten years on, our ratings are pretty much the same. Actually, internationally, bigger. No show does that! You’re meant to go down! Doctor Who just stays. It’s extraordinary! When I first took it over, the BBC said to me, ‘We’ve done all our calculations. The ratings will now fall. Expect to lose quite a bit. We don’t mind that. We’re going to keep it going. So long as it’s a good show we won’t mind if the ratings stop being quite as amazing as they were. That’s absolutely fine.’ And they didn’t. They pretty much stayed the same.” There’s no telling what the next five years will bring for Gallifrey’s favorite son, but I can’t wait to find out!