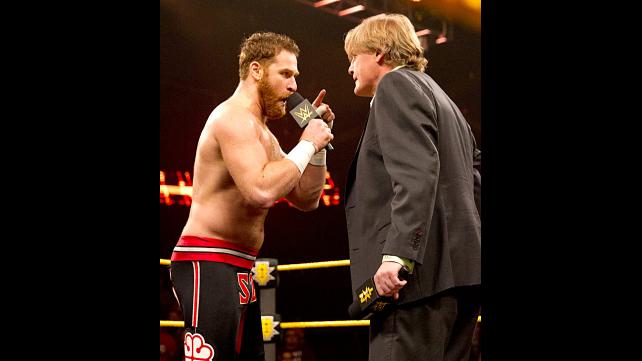 It’s that glorious night of the week again! It is the night the WWE showcases the future of the industry exclusively on the WWE Network! It is time for the 1/21/15 installment NXT! This week we began a tournament to determine the #1 contender for the NXT Championship, we were shocked on more than one occasion and best of all, we got to learn the date for the next NXT: Takeover Live event (Feb. 11th). The path to greatness began this week and ….

Sami Zayn Is Not Amused

In fact, Sami is livid. In what can only be described as a mauling, Zayn took his anger out on an unsuspecting Tye Dillinger. Why was Sami pissed? The NXT Universe would soon find out as the NXT Champion grabbed a microphone and demanded that Kevin Owens bring himself out to the ring. Instead of Zayn’s former best friend, we got the general manager of NXT, William Regal. He chastised the champion for his actions and explained that he would not grant Owens a title shot he hadn’t earned. Sami respectfully insisted that Regal make the match, stating he would not wrestle anyone else if it were not Kevin Owens.  William finally agreed to allow the bout to take place. And it would take place at the recently announced, NXT Takeover live event.

I knew something was amiss when Sami didn’t come out as he typically does. This was a different Sami than I had ever witnessed, it was the angry Sami that won the title from Adrian Neville. And of course I loved it. Tye Dillinger had no idea what hit him. This aggressiveness adds another layer to our champion, let’s us see that there is a beast lurking underneath that nice guy. It is extremely personal between these two former friends. The  war between Kevin Owens and Sami Zayn is going to be explosive and painful in more ways than one. 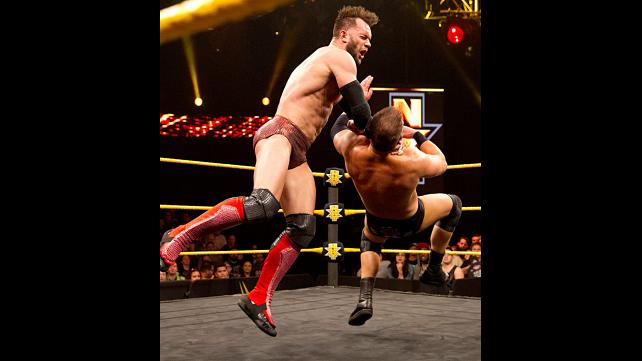 The #1 Contender tournament began with the pairing of former Intercontinental Champion, Curtis Axel vs Finn Balor.  While Axel had size and strength on the Irishman, he quickly found himself on the defensive as Balor unleashed his unique brand of offense. Finn would continue his punishment but would find his opponent was not one to take lightly. Axel shifted momentum in his favor and then began to pummel Finn and then keep him grounded with submission holds.  After a series of near falls, the Demonic Irishmen caught his second wind the tides were back in his favor after a Sling Blade clothes line and it was the Pele kick that kept it there. Finn Balor landed a double footstomp and picked up the victory over Curtis Axel, and advanced to the next round in the tournament.

The only thing that saved this match for me was Finn Balor. I find Curtis Axel to be boring. His personality is so one noted. He need’s to stop riding the Mr. Perfect thing. I get that he’s the son of a great wrestler, but using that as his gimmick isn’t working. And his style… well again there is nothing unique about him. He’s actually pretty generic, so the match while entertaining, wasn’t because of him. I wasn’t impressed with him on the main roster and so far not even the awesomeness of NXT has rubbed off on him. Finn Balor on the other hand continues to blow me away. he has such presence and ability it’s impossible not to watch him. Everything he does is so fluid and he makes it look effortless. He has what it takes to become a champion. I want to see more of that darkness in him come out. He has the potential to be sinister and dark, and can you imagine the mind games he would play with his opponents psyche? 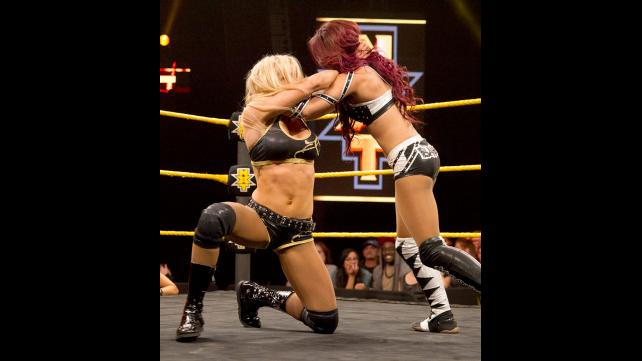 Sasha Banks and Charlotte part 3. Was it boring to see these two lock up again? Hell No!! Why? This is NXT WOMEN’S wrestling that’s why. Banks pinned the champion last week and earned herself another title opportunity. It was evenly matched for the majority of the match. They traded holds and cover attempts but ultimately the action spilled out of the ring. There Becky Lynch would attempt to distract Charlotte but only caught a brutal clothesline that planted her on the ground. The genetically superior one would then roll the Boss back into the ring to try and take advantage of her momentum. The hot blooded rocker, however, caused her Team B.A.E partner the title match as she dove in and assaulted the champion.

Sasha appeared to be upset at her partner for a moment but apparently decided that a combined beating to the NXT Women’s Champion was more to her liking. Team B.A.E had the champion helpless but were then dispersed as Bayley flew to the Champion’s aid. But things were not all what they seemed as the former #1 contender attacked Charlotte. This would bring the NXT General Manager out who announced yet another match for the NXT Takeover event. There would be a Fatal four Way for the NXT Women’s Championship and it would be, the Champion, Charlotte vs Becky Lynch vs Sasha Banks vs Bayley!

Not to keen on the ending of the match but it led to the making of a title match that is almost what I predicted. I thought it would be Natalya, but Bayley being number 4 is just as good. I know underneath that huggable exterior is an aggressive wrestler that can hold her own against the other 3 women in this bout. There was hinted drama between Becky and Sasha that will be fun to see how it plays out. It was already stated that the two are teamed up not because they are friends, but because they can help each other. Now we get to see that partnership put to the test. how will they be after Feb. 11th? Charlotte may be genetically superior and extremely gifted, but it’s going to take everything she has in order to retain her title. Her opponents are willing to do anything to see the gold from around her waist. 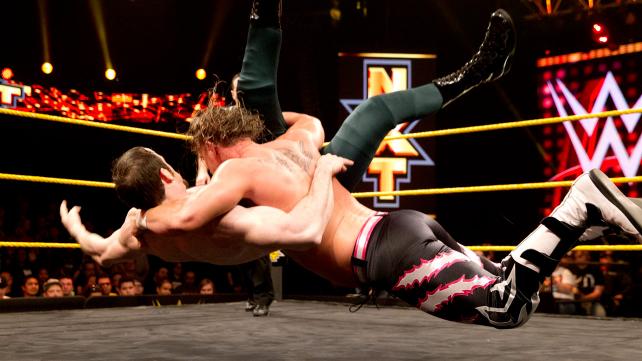 The Vaudevillians looked to put themselves back on track to be the 1 contenders for the Lucha Dragons’ NXT Tag Team titles. Buddy Murphy and Wesley Blake looked to be the first team that Simon Gotch and Aiden English would blow through on their path to gold. For a good portion of the match it looked as if things would go that way as the Vaudevillians showed marvelous team work and cut the ring in half for Murphy. Buddy however found the where with all too create the necessary separation that allowed him to tag in his partner and begin ball rolling to ultimately cause an upset win over the Vaudevillians. This huge win emboldened the team of Murphy and Blake to challenge the Lucha Dragons to a championship match next week. The Lucha Dragons accepted the challenge and the match is set to take place.

Did not see this one coming. I figured, like the The Vaudvillians that this would be a quick win on the right path. But nope! That is not how the universe decided to work. And oddly enough I’m okay with this. I like it when I’m surprised. Keeps things interesting and fresh. And as much as I love the Vaudevillians, can’t say I was too enthused on them going against the Lucha Dragons again so soon. Wesley Blake and Buddy Murphy are pretty generic in the ring, kinda unmemorable, but they can only get better right? More exposure to the different styles forces them to up their game and change. Adapt or Perish. It’s what’s Best for Business. 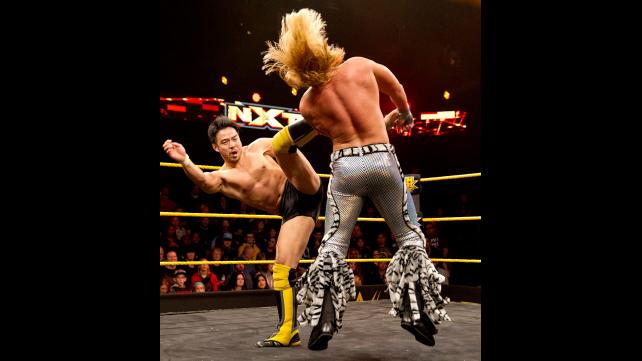 Hideo Itami was a flurry of devastating kicks to open the match. He looked to put away Prince Pretty quickly in his quest to advance in the #1 Contender’s Tournament for the NXT Championship. Breeze however, showed why he was in the tournament as he flipped the script on the angry Japanese man and began to where him down. Seems the way to take down high fliers is with submission holds and we certainly got more than a few of those from the Gorgeous One.  He would continue to rule the ring by fighting off the attempts to wrest control of the match back in Hideo’s favor. But Itami is a resilient fighter and his experience shown through as he began to again connect with powerful kick after powerful kick. It was a combination of a drop kick to Breeze as he was in the corner and a running kick that would allow Hideo Itami to pick up the win and move on to face Finn Balor in the Semi-Finals of the tournament.

This match was a lot of fun. Both Tyler and Hideo are extremely entertaining in the ring and their chemistry melds beautifully. I am glad Hideo won, the match between him and Balor will be astronomical in its awesomeness. It will be interesting to see how they handle it as the two of them took down the Ascension together. Won’t even try to hide it and I touched on it a moment ago, but I would LOVE to see the Irish Demon’s more sinister side come out in this match. I don’t want it to be an Adrian/Sami thing. I want there to be a feud of epic proportions that involves psychological warfare that makes their matches something more than just wrestling. The two have the ability to tell stories with their bodies that will be unlike anything we’ve seen before, and THAT is what I’m hoping begins when Hideo Itami and Finn Balor step into the ring together for their Semi Finals match to determine the #1 Contender to the NXT Championship.