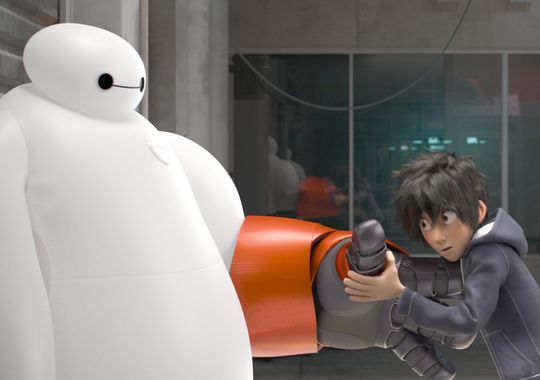 Disney’s CG animation department is on a huge winning streak. With the success of ‘Wreck It Ralph‘ and ‘Frozen‘, Disney is back in the animation game after a long absence while Pixar did their thing. Dinsey’s latest animated adventure is called ‘Big Hero 6‘, and is based off an old Marvel Comics title. I can safely say that ‘Big Hero 6‘ is a big winner and continues Disney’s streak of success.

This heartwarming and thrilling story takes place in a futuristic city called San Fransokyo and follows a young boy with a pension for science and a gentle vinyl balloon robot that acts as a Professional Health Care Provider. Directors Don Hall and Chris Williams have perfectly concocted a great group of characters and woven a storyline that  appeals to all ages and sexes. While yes, there are robots and superheroes, there is also a high level of emotional issues to keep you invested deeply with every character.

The young boy we follow is a 14-year old Wiz-Kid who graduated High School at 13 named Hiro (Ryan Potter), who would rather enter his BattleBot in underground contests for money than get a real education. His older brother Tadashi (Daniel Henney) tries to keep him on the right track by showing him his college, lab, inventions, and friends. But an accident puts everything on hold and Hiro takes solace in Tadashi’s newest invention – Baymax (Scott Adsit), a bit vinyl balloon robot who acts as a gentle doctor. 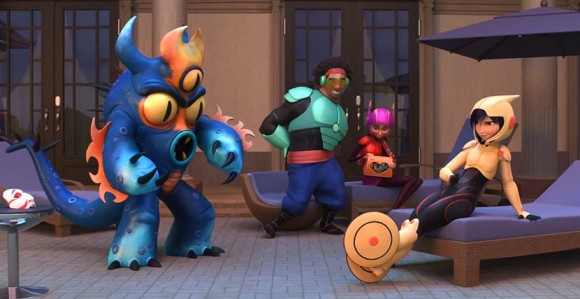 However, this accident might not be an accident, but rather homicide, and Hiro takes upon himself to solve the mystery when he comes across a super villain with a Kabuki mask. In order to take down this villain, he upgrades Baymax and uses the help of his new friends GoGo (Jamie Chung), Wasabi (Damon Wayans Jr.), Honey Lemon (Genesis Rodriguez), and Fred (T.J. Miller), who all become fun superheroes to take out the bad guys. Each character is distinguishable on their own and each pack some good laughs.

The big action sequences are thrilling and a lot of fun, but don’t pack big pop that previous Pixar movies have. The animation and CG effects are quite amazing and the part Tokyo, part San Francisco skyline is gorgeous, making each color pop off screen. There is enough heart and soul in ‘Big Hero 6‘ to appease every age here, and enough laughs to go around twice.

And don’t forget to stick around till after end credits for a spectacular sequence with a big cameo. Also, the film is preceded by another excellent animated short film called ‘Feast‘, which shows the span of a family’s life through the eyes of their pet dog. It’s amazing and Oscar worthy. But is ‘Big Hero 6‘ worth seeing? One-hundred percent Yes it is!