Marvel Comics Is Coming to Fair Park in Dallas Next Year!!

Marvel Comics has just announced a nationwide tour called ‘The Marvel Experience: The World’s First Hyper-Reality Tour‘. Despite the long name, this sounds like so much fun. So far there are four stops, one of them being in Dallas, TX at Fair Park starting January 9th, 2015 and running through February 1st. The Marvel experience will cover over two acres of space and will feature quite a lot of rides, activities, attractions, and props.

You can expect a life-size Avengers Quinjet, a 4D motion ride, and seven giant domes to encompass all of this geekdom. Spider-Man, Hulk, Iron Man, Red Skull, M.O.D.O.K., and more heroes will be featured in this major event. There will be themed restaurants as well so you can feast on your favorite superhero themed meals. This is a major project for Marvel and I hope it works well for them. Tickets will be available this weekend, so act fast. Below is the official press release that was announced at New York Comic Con today by Marvel’s CCO Joe Quesada.

The Marvel Experience is a first-of-its-kind, hyper-reality attraction that covers over two acres and encompasses seven colossal Domes, a life-size Avengers Quinjet, the world’s only 360-degree, 3-D stereoscopic full-Dome attraction and a state-of-the-art 4-D motion ride.

Produced by Hero Ventures Founders Rick Licht, Doug Schaer and Jason Rosen along with their partners, touring impresario Michael Cohl and PRG founder Jeremiah J. Harris, this first-ever hyper-reality touring Marvel adventure will preview in Phoenix from December 12, 2014 – January 3, 2015. The World Premiere will take place in Dallas, with a red carpet event scheduled for January 9, 2015. Promoted by Cohl’s S2BN Entertainment, the first leg of the North American tour will also feature stops in San Diego and San Francisco before heading back toward the East Coast, and will remain in each market for approximately three weeks. Future markets will be announced on a rolling basis.

As agents of S.H.I.E.L.D. in training, guests of The Marvel Experience will swing with Spider-Man, smash with Hulk, fly with Iron Man and more, all in preparation for an epic battle alongside Marvel’s biggest Super Heroes in a fight against Red Skull, M.O.D.O.K. and an army of evil Adaptoids. The Marvel Experience incorporates next-generation interactive technology including augmented reality, multi-person gaming and RFID progress tracking so you can see yourself in action. Everything happens with bleeding-edge technology and advanced computer animation. There’s nothing else like it. Not only does the audience get to join the adventure, in the end they may even become heroes themselves.

“And with this dynamic new way to experience entertainment, you’re actually in the middle of the action from start to finish,” says Hero Ventures CEO, Rick Licht. “While I’m sure kids will eat this up, we know that there is an extensive Marvel fan base over the age of 25 – and we’ve created this event with them in mind. The grown-ups are going to absolutely love The Marvel Experience!”

“There’s so much to be excited about here and a great many elements that literally don’t exist anywhere else,” said Quesada. “Fans will love seeing iconic Marvel Super Heroes in action against the backdrop of this first ever Hyper-Reality Tour. Nothing else compares!”

Tickets for The Marvel Experience will go on sale to the general public beginning October 10th and will be available exclusively through Ticketmaster, a division of Live Nation Entertainment. 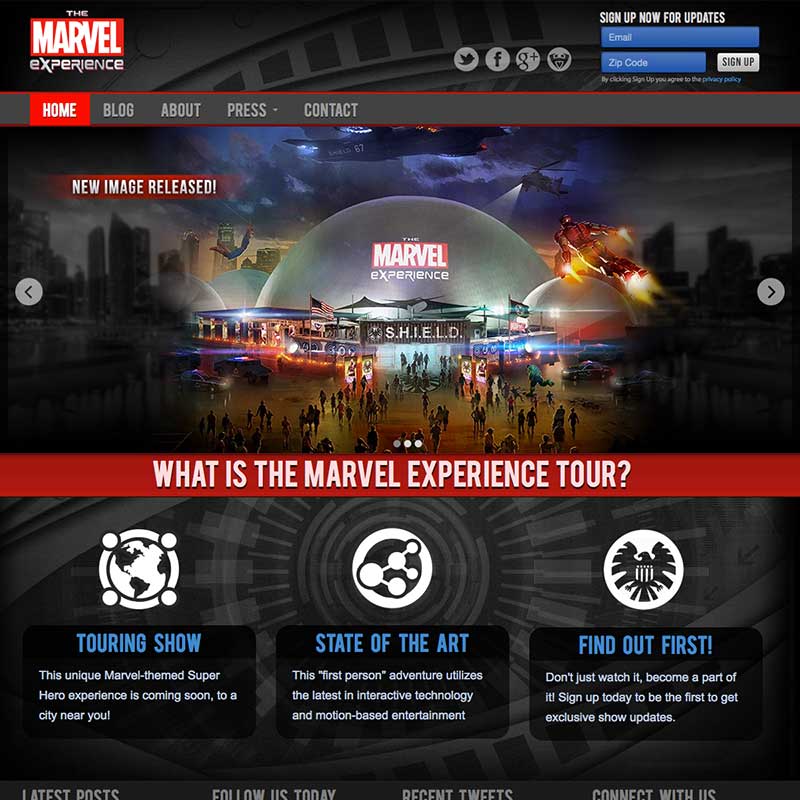 “At Ticketmaster, we work to deliver innovative ticketing and event marketing products for our clients so together we can offer their fans the best ticket buying experience. Entertainment is always about delivering the next level of great experiences and The Marvel Experience does all that and more. We are very excited to work with Hero Ventures and Marvel on this one-of-a-kind tour,” said Geoff Carns, SVP Core Clients West at Ticketmaster.

The Marvel Experience – North American Dates
[All dates, cities and venues below subject to change.]

For a complete list of tour dates, visit The Marvel Experience website (www.themarvelexperiencetour.com) and stay current on the latest developments through social media, including: