Martin Scorsese Climbs Aboard Documentary On ‘The Grateful Dead’!!! 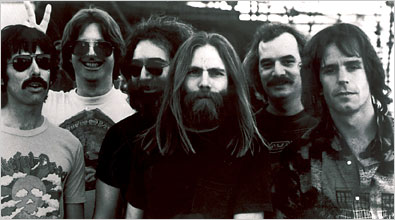 Martin Scorsese is one of my favorite directors, if he attaches his name to a project, I watch it, even if I’m not interested in the subject matter, that he hasn’t led me wrong, yet. This unashamed love of his work is why one of my favorite films EVER is ‘The Departed‘. The mob, action, Boston and even including ‘Dropkick Murphys‘ on the soundtrack – that movie was an across the board win for me. So you can understand where I’m coming from when I see the famed director set to exec produce an authorized documentary on one of the most iconic bands of the 60’s, ‘The Grateful Dead‘. Excitement ensues.

The timing of this project was not chosen as a whim, the band’s 50th anniversary will be in 2015 and the doc will coincide with that.
Martin Scorsese will exec produce an authorized documentary on The Grateful Dead, aimed at coinciding with the band’s 50th anniversary next year.Taking the director’s chair is Amir Bar-Lev (‘The Tillman Story‘, ‘Happy Valley‘). Scorsese has roots in music documentaries back to when he was an assistant director and editor on Michael Wadleigh’s ‘Woodstock‘ in 1970. There is one thing this doc will have over others and that is a slam-tastic soundtrack that will be brought in by Grateful Dead archivist David Lemieux as music supervisor. Eric Eisner, Nicholas Koskoff and Justice Kreutzmann will produce and the prod companies are Eisner’s Double E Pictures, Bar-Lev’s Axis Films and Scorsese’s Sikelia Productions.

“Millions of stories have been told about the Grateful Dead over the years,” Hart, Kreutzmann, Lesh, and Weir said in a statement. “With our 50th Anniversary coming up, we thought it might just be time to tell one ourselves and Amir is the perfect guy to help us do it. Needless to say, we are humbled to be collaborating with Martin Scorsese.”  “The Grateful Dead were more than just a band. They were their own planet, populated by millions of devoted fans. I’m very happy that this picture is being made and proud to be involved,” Scorsese said. ” I am ecstatic that this project was able to come together and look forward to finding the perfect distribution home for the film,” said Eisner.

‘The Grateful Dead‘ began in 1965 in Palo Alto, California under the name ‘The Warlocks‘. After learning that ‘Velvet Underground‘, then went by ‘The Warlocks‘ as well, the band knew they needed a new name and Jerry Garcia supplied it. The reason he had a dictionary open and how he chose the new moniker are contested by those involved. One thing that didn’t change with their name was their sound. With eclectic style and marrying elements of almost every genre, bluegrass, rock, psychedelia, folk, reggae and a little country, the sound of the 60’s was born. This amalgam led to their being considered as the pioneering Godfathers of the jam band world. The fruits of their labors were held in high regard and the accolades followed. ‘Rolling Stone‘ magazine ranked them #57 in the issue ‘The Greatest Artists of all Time. They had their induction into the Rock and Roll Hall of Fame in 1994, and their Barton Hall Concert at Cornell University on May 8, 1977 was added to the Library of Congress’ National Recording Registry. All of this while continuing to sell over 35 million albums worldwide. This band was killer. They couldn’t be stopped until Jerry Garcia died in 1995.

The currently untitled film will feature never before seen footage of performances and interviews with surviving members Mickey Hart, Bill Kreutzmann, Phil Lesh and Bob Weir. Now the waiting begins. Enjoy one of my favorites.