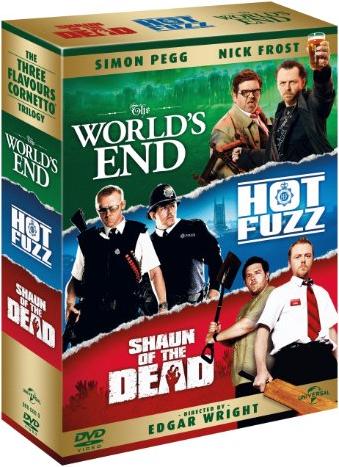 Simon Pegg, Nick Frost and Edgar Wright are a trio their fans love seeing come together. They put together a troika of films dubbed the The Three Flavors Cornetto trilogy as they’re color-coded and coincide with a specific Cornetto ice cream flavor. . ‘Shaun of the Dead‘ features strawberry-flavored Cornetto, signifying the film’s bloody and gory elements. ‘Hot Fuzz’ is the original blue Cornetto and signifies the police element in the film. ‘The World’s End‘ is a tasty green, mint chocolate chip flavor in a subtle nod to aliens and science fiction. Pegg and Wright wrote the films with rapier-sharp wit, killer action and a touch of ticker.

Now that fantastic triad is planning on making another foray into celluloid. Pegg gave an interview and stated ‘We’re kind of into a creative cycle right now. It has a title and everything. We’ve all got different things [going] on and we know we have to get those things done. The coming together thing is without question on the table and will happen when we can do it.” ‘I really love working with those guys and I wouldn’t ever not want to work with them, It’s not even a question.” “When we said the trilogy was over, it was because that group of films was over. They’re all kind of related with each other and deal with a specific idea. There’s a criteria to those films.” “The next thing we do won’t do that, it will just be something else. It will happen. We made three films in ten years and hopefully in the next decade we’ll make another three.”

So does this mean we’re going to get another triumvirate that are loosely connected? There are so many alternatives the creative geniuses could draw from, that I don’t even have an idea of what to expect! Wright is currently working on a film adaptation of Andrew Smith’s novel, ‘Grasshopper Jungle‘. This could be the perfect vehicle for Frost and Pegg. Everything I’ve read makes me picture the pair. Funny, intense, complex, and brave, Smith brilliantly weaves together everything from testicle-dissolving genetically modified corn to the struggles of recession-era, small-town America in this groundbreaking coming-of-age stunner. It’s a little ‘Slaughterhouse Five‘ mixed with the feeling of ‘Soylent Green‘ accompanied by a stand-up comedy show. Even if Pegg doesn’t star, it’s going to be great!