Film Review: ‘For No Good Reason’!! 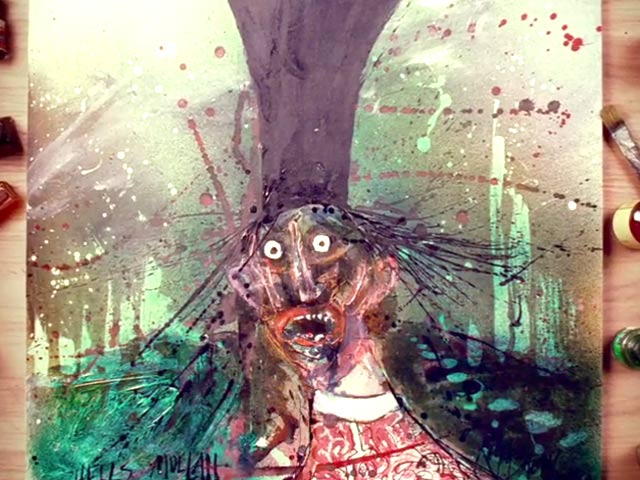 One of the most recognized artists of a generation whose artwork has sparked debate, protests, and change is still very alive and well. Coming across as the horror version of Michelangelo, Ralph Steadman is still producing great artwork and has allowed a husband-wife producer/director team to film a documentary on his life and art. Steadman is now 77 years old and lives with his family in a nice villa in the countryside of England where his fellow friend Johnny Depp came over and played the role of interviewer during this 80 minute well-edited documentary.

Steadman is perhaps best known for his work with his long time friend and collaborator – Hunter S. Thompson, where Steadman would illustrate his gonzo-journalistic articles with his big splashes of ink on every canvas. You would perhaps immediately recognize his work from ‘Fear and Loathing in Las Vegas‘. The documentary is called ‘For No Good Reason‘ and is a quote from Thompson, as this story unfolds more like an examination on Steadman’s art rather than his life.

We see Steadman paint as Depp asks him fanboy questions, other celebrities pop up including, Terry Gilliam and Richard E. Grant, and of course some archival footage and interviews with William S. Burroughs, Steadman, and Thompson. But what lacks in this documentary is a true look at the man Steadman himself, as nothing is covered of his political, social, or religious issues that his artwork has shown over the years. Even his depression is not covered and Depp doesn’t dive deeper when Steadman gives him a hint of something of any real value. Steadman’s family and friends who are over most of the time, are not interviewed or even rarely seen on screen here either.

It would have been nice to see some interviews from his close family. Instead, get a glimpse of his artwork – old and new. It was quite cool to see him start a piece from scratch and finish it, and to see just how free form it all is, as he paints in his garage. A good chunk of the film covers the relationship between Steadman and Thompson who famously had a rough and rowdy relationship, even up until Thompson’s suicide in 2005. But their teaming up together over the years certainly made for some excellent work. 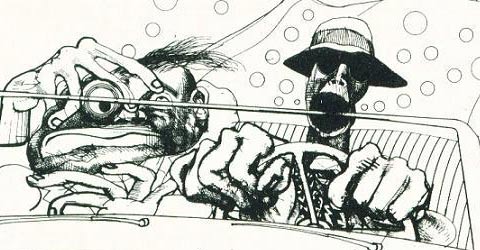 It was nice to see that Steadman allowed the filmmakers to keep in his and Thompson’s last conversation in which Thompson berated Steadman for succeeding in his career. Not all of Steadman’s work is covered here, for instance we don’t get any info or visuals on his Sigmund Freud work, but get to see some of his vulgar Leonardo Da Vinci art. A lot of the film is over-layed with an indie rock soundtrack, which at times drowns out the dialogue from the interview subjects. It was a strange decision to use this technique, as if the director’s didn’t want us to hear what Steadman was saying.

There is some great animation of his artwork throughout and it is just fun to see Steadman still working. Depp being in the film will certainly turn on the main-stream crowd into seeing this, but I think the film could have been better without him it. This is certainly not the ultimate take on a brilliant and great artist by any means, but ‘For No Good Reason‘ is a visually stunning documentary that is entertaining and fun to see the old interviews of Thompson and Steadman yelling at one another. And yes, Bill Murray does show up here.