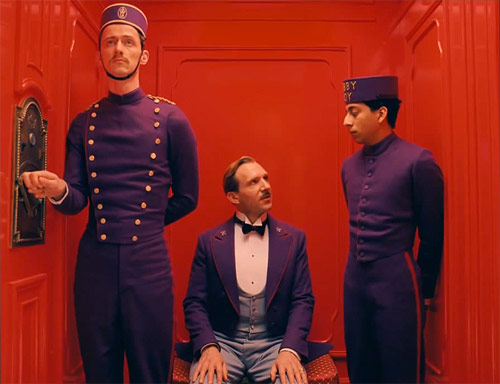 There are so many filmmakers out there that have given us amazing and iconic movies. From  Steven Spielberg to Stanley Kubrick and from John Hughes to Danny Boyle, we have laughed, cried, and felt every perk on the emotion scale while watching movies through the years. However, some of our favorite filmmakers have lost their creative eye and ability to make quality films, while their movies earlier in their career won Oscars and pushed these directors to super stardom, but later in their career, their films have us questioning their talent while their films are met with very negative reviews across the board. It’s truly a sad day when this happens, and unfortunately it happens more often then I’d like to admit.

But there are a handful of directors who don’t cater to money or studio execs, and continue to follow their vision and make amazing films. One that comes to mind is Quentin Tarantino. His films have always been consistently amazing and are always highly entertaining as well as incredibly well-made on every filmmaking level. Another director who follows this pattern is Wes Anderson. Each one of his films are consistently well-made, and are highly entertaining. In addition to that, both Anderson and Tarantino have a unique style that showcases them personally and their artistic mind. 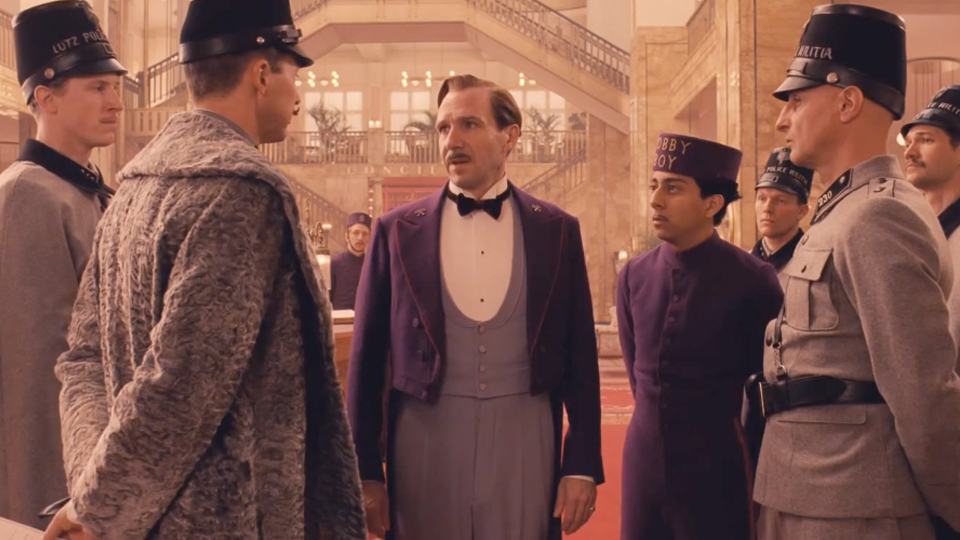 You can always tell just by looking at the visual image of a film if it was was directed by Anderson or Tarantino by how they use their camera. And if you turn on the sound, you can always tell by the score, music, and type of dialogue each of these fine directors write. When watching any Anderson movie, you are almost immediately transported into a whimsical and almost fairy tale like land with brilliant and witty characters that seem to be visions of old folklore and legend. Hell, even right down to the costumes, these characters that Anderson has created are iconic, as people dress up as them for Halloween each year. 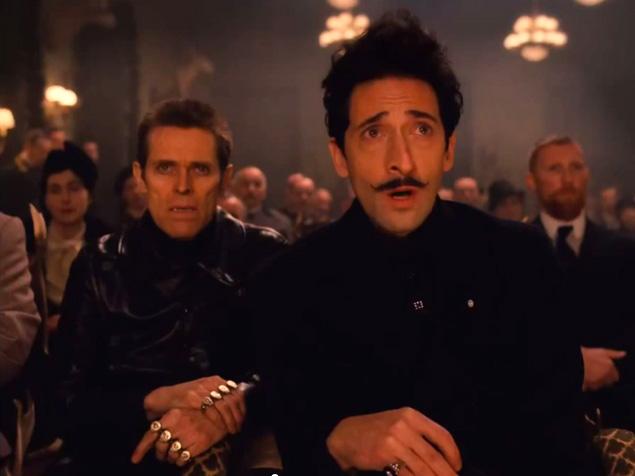 Like Tarantino made his WWII film with ‘Inglorious Basterds‘ with it’s own sense and re-writing of history, Anderson has made something similar. And boy, does it pay of on every level. Based on some stories by Stefan Zweig (who was born in the 1800s), this story follows a somewhat multi-generational plot of the owners and staff of ‘The Grand Budapest Hotel‘, which was a luxurious hotel back seventy years ago, but present day, can barely keep its lights on. The film is told in the form of a story over dinner by a man who supposedly owns the hotel and is one of the wealthiest people in the world.

We travel back in time to the start of a fictional WWII where the Nazi party is called the Zig-Zag party. The Grand Budapest Hotel is in full swing with royalty, celebrities, and politicians partying, and staying for long weekends and events. The owner of the hotel has entrusted M. Gustave (Ralph Fiennes), a trusty ‘head of staff’ who services the high-end guests in more ways than one, particularly the elderly women. Gustave is in charge of every maid, server, clerk, and bell hop, and he runs a tight ship. One day, a young teenager who is named Zero (Tony Revolori) comes by the hotel in search of a job. 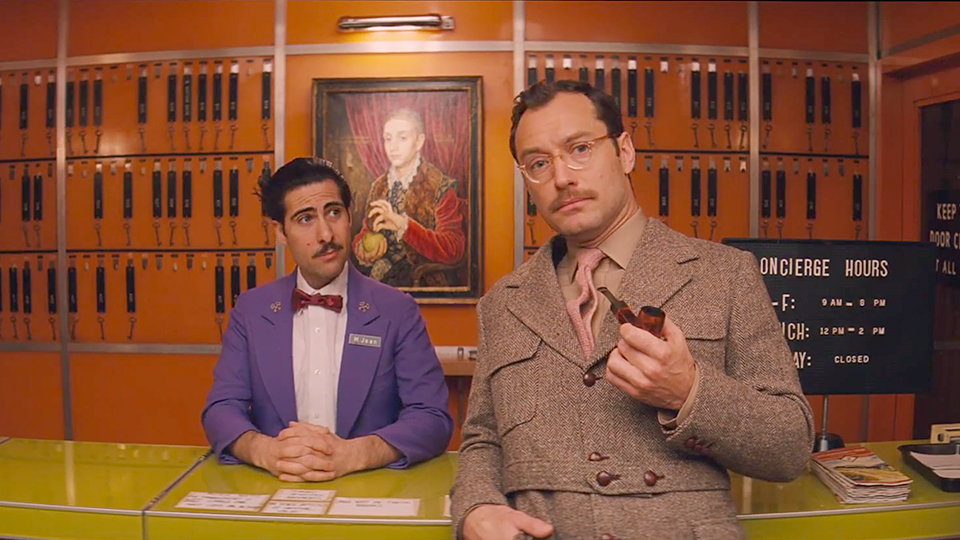 Due to his determined attitude for perfection and willing to do anything for the job, Gustave takes him under his wing and makes him his assistant. One of the hotel’s guest is a very wealthy elderly woman who comes to the hotel to get frisky with Gustave, and upon her latest visit, she tells him that she is scared for her life. Soon after that, she is found dead and Gustave is invited to her will reading, when he and her sinister family (Adrian Brody) and his bodyguyard (Willem Dafoe) are angry that she left Gustave one of her paintings, which is valued in the millions of dollars. Wehn Brody and Dafoe try to make waves, Gustave and Zero steal the painting, which sets our story in motion that involves a thrilling snow ski chase, a prison escape, nazis, a big gun battle in the hotel, and enough dry wit to last two films.

This is more of a cat and mouse chase as Zero and Gustave are trying on the run from Brody and Dafoe, as they come into contact with quirky characters throughout who either end up dead or saving the day. There is a good side story of where Zero falls in love with a local girl who cooks at a great bakery as he shows his true loyalty and servitude to the job. Most of the Anderson regulars show up during the film, but only in small doses. 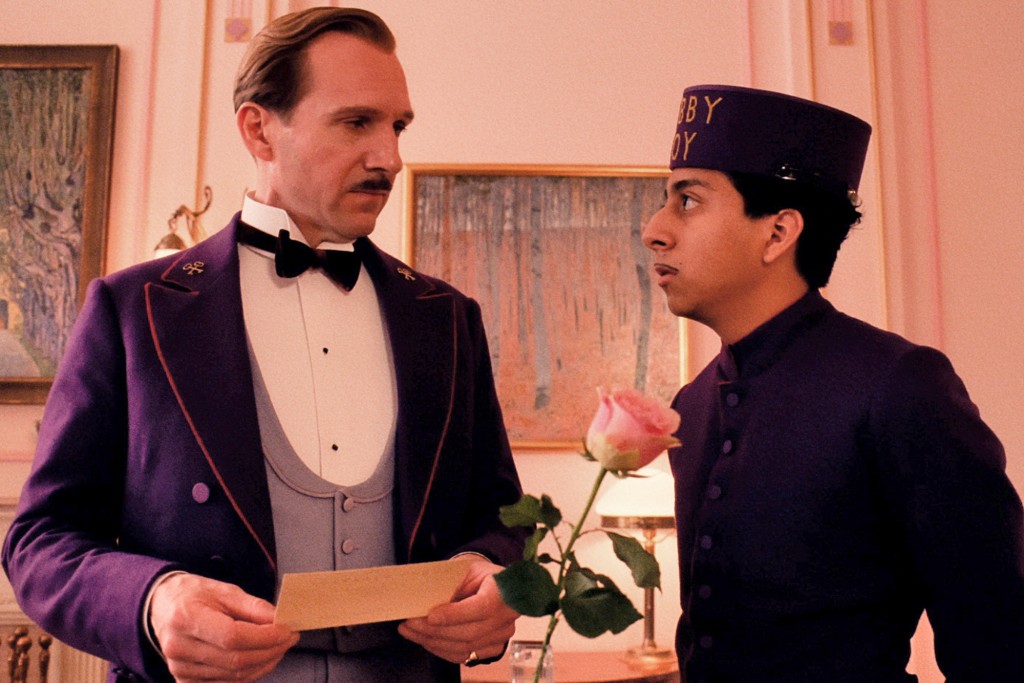 The main people are Fiennes and Revolori, who give Oscar worthy performances. During the film, I had to remind myself that Gustave wasn’t a real guy, and that it was Fiennes playing the role. It’s that good. Being a war film, yes there is blood and gore, as well as some great gun sequences, but it is done in that famous Anderson style that makes it all seem magical. ‘The Grand Budapest Hotel‘ is an amazing film and has Anderson pushing his talent and eye in new and creative directions. If you see one movie this month, make it this one.