A long time ago, we used to be friends, but I haven’t thought of you lately at all. That is until about a year ago, ‘Veronica Mars‘ creator Rob Thomas and Veronica herself Kristen Bell took to the crowd-funder website Kickstarter and asked us fans of the amazing tv show ‘Veronica Mars‘ to fund a feature film. Warner Bros. told Bell and Thomas that if they successfully funded the $2 million dollar budget, that they would match that and distribute and market the movie.

Well in under 24 hours after Thomas and Bell launched the Kickstarter page, they had successfully funded their film. Not only that, but by the end of the Kickstarter Fund, they had raised more than $5 million. So us fans have now received a full fledged ‘Veronica Mars‘ movie with almost every character from the show coming back. And I’m super psyched to report that the ‘Veronica Mars‘ movie is everything I hoped it could be and more. It was just fantastic with every nuance, detail, homage, wink, and high-five from the series, showing up in this film. That being said, in order to truly benefit and enjoy this film, you most likely will have wanted to watch the original three season series from ten years ago and enjoyed it.

Because if you didn’t, then you might find yourself lost in the middle of an inside joke that you don’t understand, and will wonder why everyone around you in the theater is laughing and smiling. But that was the point of this film. It was for the fans with the small hope that it would create new fans of the characters. As a critic, it’s a little difficult to review a movie like this, because on one hand, I loved it so much and can’t wait to watch it over and over again. But maybe that’s because I’m such a huge fan of the show. On the other hand, there are plenty of flaws with the film that might turn non-fans away.

I’m going to stick with my original statement in that ‘Veronica Mars‘ the movie is AMAZING, since again, this is strictly for the fans, and Thomas and Bell deliver the goods on every level. The film is set ten years later as we have our iconic and witty character Veronica Mars interviewing for a job as a high-powered attorney in New York City. She went to the best schools and has worked hard to get where she is at, which is in front of Jamie Lee Curtis, one of the heads of the firm. After the awkward, witty, and successful interview, she heads to the studio of ‘This American Life‘ where Ira Glass makes an appearance, and where Veronica’s boyfriend Piz (Chris Lowell) works to tell him about the interview. 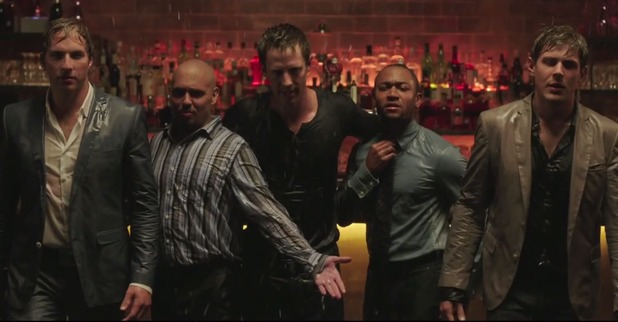 She then sees on a television on the wall a news story that says a girl from her high-school was found murdered and that Logan Echols (Jason Dohring) is the suspect. As soon as the news story finishes, Veronica’s phone rings with Logan asking Veronica for help on the other line. Next thing you know, we are back in Neptune, California, and Veronica tells us that it has been nine years since she has seen or spoken to Logan.

Logan has seemed to clean up his life for the most part, as he is a jet pilot for the army and when he is on leave, spends it with Dick Casablancas (Ryan Hansen), who is as funny as ever and is doing what you’d expect him to be doing ten years later, which is living in a cool house on the beach, watching porn, drinking alcohol, and surfing. Meanwhile, Veronica’s friends Mac (Tina Majorino) and Wallace (Percy Daggs III) are working in Neptune and are pretty successful. They show up to welcome Veronica back for a few days and to convince her to go to their ten year high-school reunion. 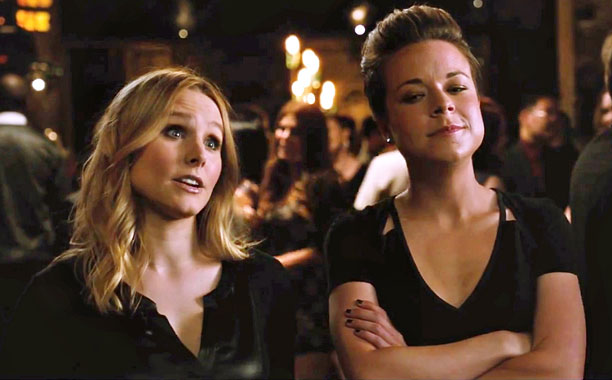 Veronica’s dad is still a P.I. and the evil Sheriff Lamb has been replaced by his younger brother played by Jerry O’Connell. And let’s not forget about Weevil (Frances Capra) who seems to have turned his life around and has a great family now.  Basically, you’re gonna get everyone you want in this movie in some form or fashion. But it’s not all smiles in Neptune, as we’ve come to know when Veronica is solving a case, which is murder this time around. Rob Thomas gives us a fantastic story with lots of twists and turns to keep us guessing, complete with that witty and fast dialogue that we have come to love from the television show. He also gives us each character in a way that we have wanted to see them for ten years, no matter how small their role was in the series. It’s quite a fun couple of hours.

But Rob Thomas has mostly worked in television, and not to much in the feature film arena. And it shows. The film is shot like a long episode of television that doesn’t always transfer well onto the big screen. Thomas also leaves a few things very open ended, as if he didn’t have enough money to finish the project, or was leaving something else for a sequel. But the way it’s done is awkward as shown when certain characters pop up and do something drastic and are never heard from again. It just didn’t make a lot of sense. But other than those few things, the film is a little bit of perfect for fans of the show. It gives us everything we wanted right on down to the theme song. If you’re a fan of ‘Veronica Mars‘, this is the movie you’ve been waiting ten long years for. It won’t disappoint at all.