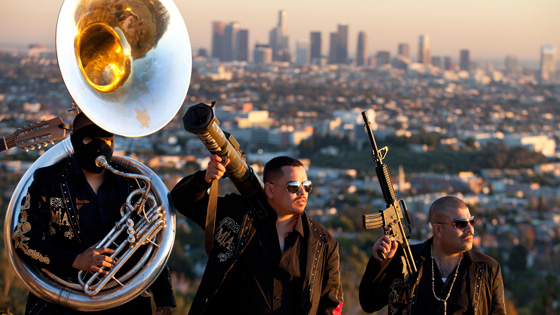 This is quite an interesting documentary by Israeli filmmaker Shaul Schwarz who follows police and musicians connected with the sadistic and violent Mexican drug cartel. The film is called ‘Narco Cultura‘ and is a scary, yet hilarious examination of the music that exploits the drug war in Mexico as well as the never ending pursuit of the drug lords by the Mexican police. I don’t expect this making anybody’s Top 10 documentary list, due to its repetitiveness, but should play well and might even make the rounds on VOD.

If you are unfamiliar with narco corridos, they are known as drug ballads and were featured in the TV shows ‘The Shield‘ and ‘Breaking Bad‘. A narco corrido is a song, primarily created by a mexican band consisting of a waltz or polka type beat with accordions, a horn or two, and has brutal lyrics that talk about real life drug lords and the ongoing drug situation in Mexico. It’s like gangsta-rap with a polka beat in spanish, but more hardcore, as it usually features chopping up bodies, mass murders, and kidnapping. It basically glorifies the drug lords and their crimes.

One of these musicians lives in L.A. and goes by Edgar Quintero, who has a band named Buknas de Culiacan. He tells us that he and the other rappers like himself scour websites for news on the violent drug cartels and their vicious murders for their inspiration and their songs. They even go so far as to meet with the drug lords and their henchmen to get stories to put in their songs, to which they are paid in drug money, and even weapons. 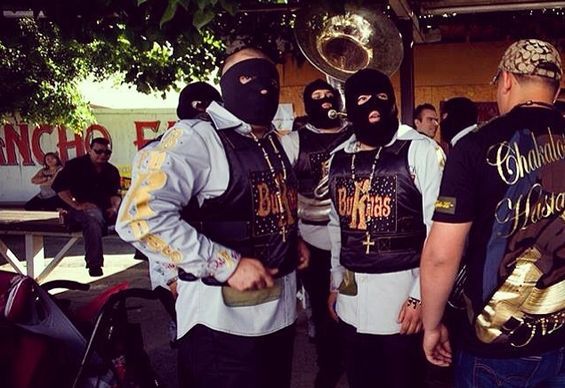 Meanwhile, Richi Soto, is a crime scene investigator in Juarez, Mexico, the world’s most violent city, who investigates the cartel’s murders and kidnapping cases. He tells us how a lot of his colleagues have been assassinated by the cartel, and how he has to take sever precautions with his own life and his family, in order not to meet the same dire consequence for just performing his job. We even see very graphic photos and videos of the murders, which is horrifying to say the least.

What is so sickening and sad, is that these so called musicians have a giant following, which is mainly the young Latino crowd, who revel in these lyrics and hold these drug lords and their crimes as if they were golden idols. Every concert is packed with a young crowd of Latinos who know every violent word, dance, and cheer these frightening songs. Even the musicians brandish weapons on stage, even a bazooka. Above, I mentioned this was a hilarious look at this situation, and I mean that these hardcore lyrics and stories are set to an accordion and plays out like a mariachi band. It just doesn’t seem to mix well, especially when these bands play at club like venues with laser lights.

If two things are evident in this documentary, they are that some of the law enforcement are just as corrupt as the criminals themselves and the musicians themselves wish they were a part of the drug cartel, but have made their money exploiting their hero’s lives. One thing for sure is that I might be too scared to step inside Juarez. But what makes this documentary suffer, is the offbeat pace and unnatural flow to it. Not too mention, we see the same scene over and over, but with different people. This could have been better as an hour long HBO special, rather than the 104 minute doc it is.