Rounding out the end of the year is yet another survival story with Peter Berg’s ‘Lone Survivor‘. This intense and gritty true account of the failed mission of a Navy SEALs raid in Afghanistan packs a strong punch, even though you know only one person makes it out alive like the title suggests. The real life Navy SEAL Marcus Luttrell is are lone survivor here, and we can compare this film to plenty other movies that take place in the Middle East where a mission has gone wrong, but Berg pulls out all of the stops with this story, and not only gives us an hour and a half of sheer brutality, but also gives us some great character camaraderie and tender moments to connect with these honorable soldiers. With the amount of movies out this holiday weekend, I don’t see this one trumping the box office, but might make a medium-sized dent.

We all know that the Navy SEALs are the cream of the crop and the best of the best in keeping our great country safe. These soldiers are the best equipped, the most trained for the most difficult situations, and for most of the time, get the job done, if not every time. But once in a blue moon, something goes wrong. Back in 2005, four SEALs, Lt. Mike Murphy (Taylor Kitsch), Petty Officer 1st Class Marcus Latrell (Mark Wahlberg), and Petty Officers 2nd Class Danny Dietz and Matt Axelson (Emile Hirsch and Ben Foster) were tasked with a mission to be dropped off in the rural mountains of Afghanistan by helicopter, and had to trek around the rocky terrain until the came upon a village where a high ranking member of the Taliban and Bin Laden’s right hand man was hiding out, and killed dozens of marines for breakfast earlier in the week. The task was to take this guy out and his soldiers, which upon arrival and looking through their binoculars at the village, the amount of Taliban members were much greater than anticipated.

The mission heats up quickly when an old man and two young kids stumble across the SEALs, and there in lies a conflict of ethics. One of the young kids seems to be the next member of the Taliban, as he seems to not cooperate with the SEALs at all. Now the elite squad must make a decision of whether to kill them or set them free. After an intense discussion, they decide to let them free in fear of going to jail for war crimes, but shortly thereafter, the SEALs become in a horrific battle with Taliban members that seems to not stop. In video game like fashion, the bad guys keep coming with bigger and better weapons including a rocket launcher. But this is no video game, but real life and death. 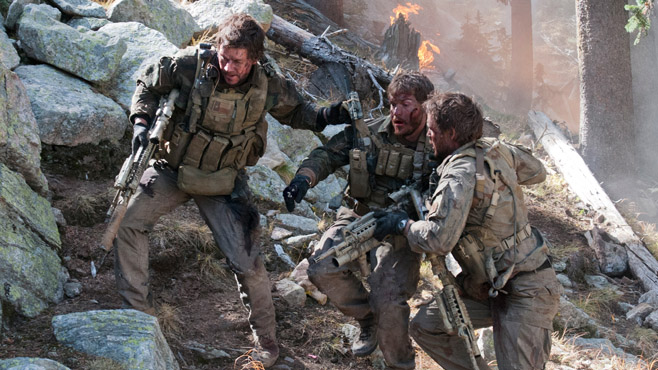 Berg does a great job showing the physical aspects of the soldiers and their tough and tragic situation. As bullets, explosions, and debris literally rip the flesh off our soldiers and blood continually pours out, we feel every hit, bullet entry, and fall these soldiers take. And I think Berg is the best in the business at filming characters falling down cliffs and mountains,as we saw in his film ‘The Rundown’ with The Rock. Berg tends to slow down the film as these character fall to the hard rocky ground, and speed up to normal pace at the moment of impact with a branch, rock, or tree, and with a loud and intense crunch or pop sound, we feel every painful hit. There is no shortage of these scenes here.

Despite Wahlberg being 42 years old, and the character he played was not even 30 in real life, he definitely pulls off a young soldier very well. Never at one point did I think he was too old for the role. That goes the same for the other three, even Kitsch. Their friendship and camaraderie at the beginning of the film is incredible, and you just know these guys will never let the other down, as I know that Berg and some of the other actors went through some of the actual training the SEALs go through.

This is one of Berg’s best films and is loads better than his recent effort of ‘Battleship‘. With Steve Jablonsky’s impressive score, and some great acting and physical performances by these actors, this ultra-bloody and tragic story is one for the ages and won’t be soon forgot. The film let’s us know that some of these situations that are portrayed happen everyday over in the Middle East, and it made me glad that we have people like the SEALs and good people overseas who are willing to take out the evil that is the Taliban.