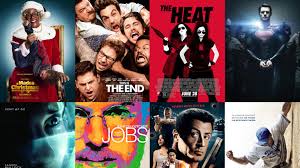 Well folks, it was quite a year at the cinema.  After totaling everything up, I was lucky enough to watch 35 films in theaters.  There’s some great films that I missed, and some that I avoided like the plague, but out of those that I did catch, here’s the WORST of 2013.

Be sure to check out Fernando’s BEST LIST BY CLICKING HERE!!

WORST FILMS OF THE YEAR

10.  Oz the Great and Powerful:  I love Sam Raimi, but he was totally absent from this film save for a deadite inspired final sequence with the wicked witch of the west.  The final act is worth it, the rest of the film I Sam Raimi saying, “really, so, you just want me to copy Tim Burton’s worst huh?”

9.  Pacific Rim:  I grew up on Japanimation, “The Big O,” “Akira,” “Cowboy Bebop,” all phenomenal.  And of course, what kid didn’t love Godzilla growing up?  The normally brilliant Guillermo del Toro tries to bring this genre to American cinemas but can’t find the line between respecting the source material and sufficiently dumbing it down for American Audiences.  If you want nonsense with robots, just stick to Transformers.

8.  World War Z:  Max Brooks wrote a post apocalyptic novel that was equal parts zombie infestation, war, and social commentary.  It was scary and witty and funny and graphic and sweet and sad.  The film version was none of the above, and the zombies just weren’t scary.  Just go watch AMC’s Walking Dead instead.

7.  Despicable Me 2:  The minions are awesome, but the  heart of the original was left somewhere on the cutting room floor.  Somehow though, racial stereotypes easily made it into the final cut.  I’ll wait for Despicable Me 3, Rise of the Minions.

6.  Elysium:  What was meant to be a social metaphor ends up more like a flat simile.  “Let’s take the border and put it in space.”  Good intentions, horrible execution.

5.  Machete Kills:  While it may have been a fun watch, the original Machete was Mexploitation at its grindhouseiest.  The sequel is more of a “how ridiculous can this get?” game.  Aside from a hilarious performance by Oscar nomine Demian Bichir and the opportunity for Alexa Vega to show everyone that she’s all grown up, there’s little but a couple of laughs worth finding in the film.

3.  JOBS:  Biopic of Steve Jobs that completely fails to pay any tribute to this man, somehow only capturing the most superficial of events of this man’s life.  If you want to pay your respects to Mr. Jobs, go play with your Ipad.

2.  The Great Gatsby:  Baz Luhrmann tried to capture the spirit of “the great American novel,” but manages to completely miss the point of the novel while also failing to bring the charm of his well known musical renditions. Unless the point was that the film, like the protagonist, were both doomed by their own ambition; if that’s the case, then best metaphor ever!  So, Baz, nice try “ol’ chum.”

1. WHITE HOUSE DOWN:  This movie is the definition of ridiculous.  Jaime Foxx is the president, Channing Tatum rescues him, there’s a ton of explosions, and three loosely put together plots that even put together barely resemble one coherent script.  Total cash cow film that will leave you shaking your head in the theater.

Be sure to check out Fernando’s BEST LIST BY CLICKING HERE!!