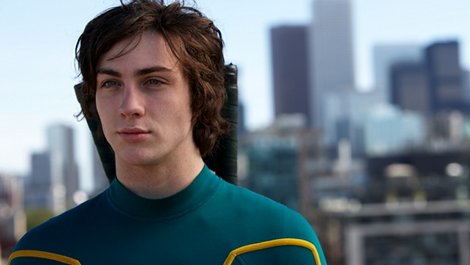 Before, I get into the future project of Aaron Taylor-Johnson, a.k.a. Kick Ass, let me just take a moment to express how absolutely gorgeous this guy looks without the frizzy hair of his first appearance as the normal dude turned vigilante. I kind of slid my eyes past him because I could not see the hottie he had hidden. I just checked out a picture of him and was freaking gobsmacked at the boy looking back at me that will be filling my night time thoughts. Yummy. Now that I’ve stated the obvious but important point of his looks I can get on with his new project.

Taylor-Johnson will be able to juggle the publicity stops for Godzilla with the acting demands of the character Pietro Maximoff /Quicksilver in Marvel’s Avengers: Age of Ultron. Taylor-Johnson has been the actor of choice for Quicksilver since June. Joss Whedon added Quicksilver and the Scarlet Witch to Ultron as the villains for the flick. The new additions are twins fathered by Magneto from the awesome cannon of X-Men characters, sadly, Magneto will not be in this movie. Outside of The Avengers and their character feature films, we don’t see much with characters popping up in films that are not of their own comic book origins. I don’t know about you, but I’m ready for some great crossovers like that. Keep the same actors, but bring them in. Comic books are very cross-populated. I mean Wolverine was first seen in The Incredible Hulk comic book, but that doesn’t mean he’s stayed there! Let these characters grow and evolve! If anyone could give comic book characters that kind of freedom, it’s Joss Whedon. Just don’t kill anyone I love! I’m begging you! I still haven’t gotten over the unceremonious death of Wash in Firefly.

Back to Taylor-Johnson, though. He next stars in yet another Godzilla reboot with his new Avengers cast-mate Elizabeth Olsen, who will play his twin sister, Scarlet Witch. The pair join the crazy successful franchise that is populated with Robert Downey, Jr, Chris Hemsworth, Chris Evans, Mark Ruffalo, Jeremy Renner, Scarlett Johansson, Samuel L. Jackson and James Spader. Avengers 2: Age of Ultron will kick off the summer movie season on May 1, 2015.