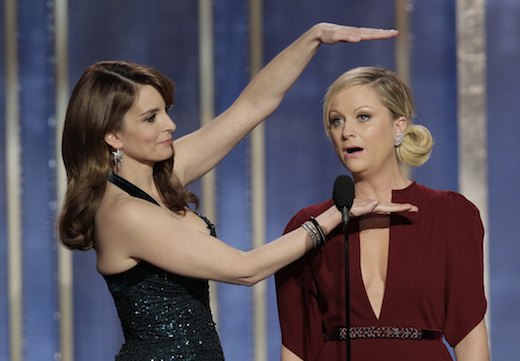 The speculation that Tina Fey and Amy Poehler have signed to host the Golden Globes for the next two years is true. “Tina and Amy are two of the most talented comedic writer/performers in our business, and they were a major reason the Golden Globes was the most entertaining awards show of last season,” said NBC president of alternative and late night programming Paul Telegdy. “We’re elated they wanted to host together again and that they committed for the next two years.” After Poehler and Fey’s last run as hosts had positive reviews and 19.7 million total viewers and a six-year high for the show, the comedy duo is sure to give them another 2 years of greatness.

There was talk of Fey and Poehler hosting the Oscars and this move effectively removes that factor.  “I think the Oscars is just such a bigger task,” Fey said during their Globes prep, “to sing and dance and do the pre-taped segments and all that stuff.”

“We are thrilled Amy and Tina have decided to return as hosts of the Golden Globe Awards for the next two years,” said HFPA president Theo Kingma. “Their return ensures that the Golden Globes will once again be the biggest, best and most entertaining awards celebration of the year.”

To further raise their awards show value, Fey and Poehler appeared in September’s Emmy Awards in Neil Patrick Harris’ opener and speaking about NBC’s offer to host the Globes.“Tina and Amy have a truly unique chemistry, making them one of the most talented and captivating pairings of all time,” added Dick Clark Productions CEO Allen Shapiro. “We are thrilled to have them back in 2014 and 2015.”

After leaving Saturday Night Live, Poehler discovered further success with Parks and Recreation.  Fey found the same with seven seasons of 30 Rock, she is developing a new series for NBC. The pair have also starred in Baby Mama, Saturday Night Live, and the pair put in appearances on the upcoming Anchorman 2: The Legend Continues.