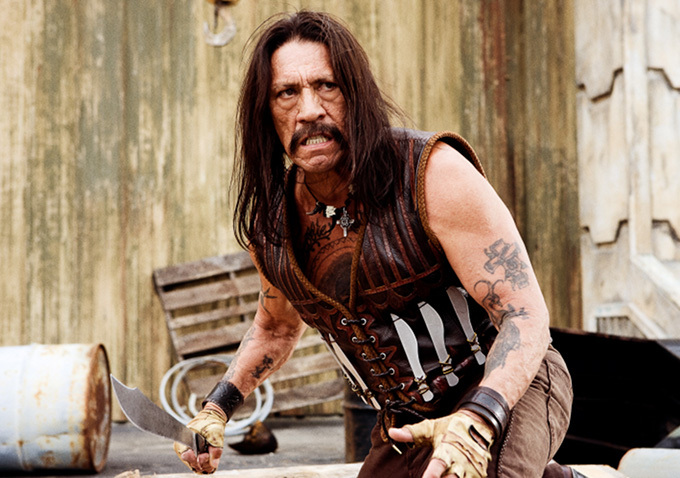 ‘Machete don’t tweet’ is one of the lines that is uttered by Danny Trejo’s iconic character, Machete Cortez in this new hilarious fun-as-hell sequel by Austin director Robert Rodriguez. It’s one of several “Machete don’t” pieces of dialogue that is said throughout the film. It’s funny, because Rodriguez actually made a ‘Star Wars‘ film with Machete in it this time around. Not only do we see machete lightsabers and similar characters in the ‘Star Wars’ universe, but we also get carbonite and landspeeders, and at the end of the film, it all comes full circle, as you’ll say, “I just watched a ‘Star Wars’ movie made by Robert Rodriguez. With an all-star cast and even more blood, guts, and kills than the first one, this over-the-top and highly entertaining sequel will sure make decent returns to warrant a third sequel, which is heavily promoted in the form of a trailer before the film starts and at the end of the film entitled ,’Machete Kills Again…In Space‘.

Does any of this make any real sense? No, but it sure is a hell of a lot of fun to watch. From Sofia Vergara’s man-hating dominatrix, who uses her boobs as weapons to Machete swinging an enemies intestines into the blades of a helicopter, you’re in for something special with the sequel. Trejo has an impressive screen presence and owns the screen every time he’s on camera, even if his monotone dialogue never has any emotion. It’s his supporting cast around him who round out this zany, but brilliant action adventure. And yes, Michelle Rodriguez shows up again, but her Mexican network takes a back seat this time as Rodriguez and her one eye spill a lot of blood.I have no doubt that you will be entertained by ‘Machete Kills’ and walk out of the theater with a huge smile on your face, wanting to see the next chapter set in space with even more celebrities. This schlocky grindhouse film is what Rodriquez is great at and this movie succeeds with quirky and enjoyable story and characters. Machete will be here for a long time and I’m okay with that.